1998 was a happier time. A time when Michael Owen was a fresh-faced teenager who “could be up there with the all-time greats”; Alan Shearer wasn’t embarrassing himself on Match of the Day; England had a reliable goalkeeper; Sir Bobby Robson was still alive; El Tel wasn’t orange and Glenn Hoddle hadn’t revealed he thought the disabled were being punished for sins in a past life.

It can also be used as a marker for comparison between past England sides and the 2010 version. While England limped out in South Africa, they gave a good account of themselves in Saint-Etienne; perhaps unlucky not to win despite being a man down for 75 minutes. The most damning factor is how a team 12 years earlier looked more fluid and advanced tactically than the present day version. 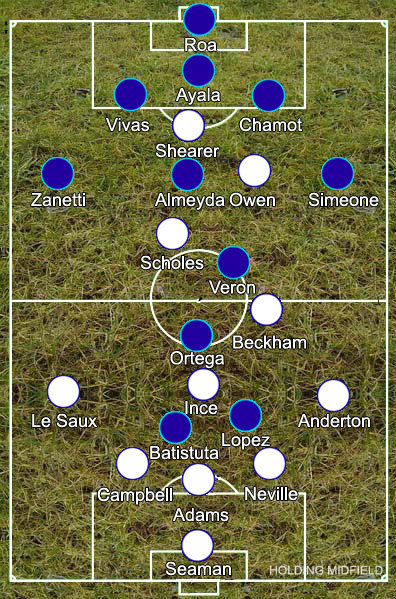 As was standard in 1998, both teams lined up in a 3-5-2 formation and many of the problems that caused it to die out are plain to see.

England started out with an intense pressing game to disrupt Argentina’s passing game; it didn’t, and England immediately began to sit rather than chase.

In 1998, Michael Owen was much more than the simple poacher he became later in his career. Happy to run the channels, hassle the Argentinian players and drop in alongside Paul Scholes; he had an excellent game. Wary of his pace, Argentina’s defence was sitting extremely deep. Instead of giving him space in behind, this gifted him plenty of space in between the lines to run at them. Repeatedly, one of Chamot or Rivas would follow him up the pitch, he’d pick up the ball, easily shrug them off, and run at Ayala and Chamot/Rivas. Doing this, he won the penalty and scored his famous goal.

He was also very crafty. As he would show again against Argentina 4 years later, he knew when and where to fall down when he could perhaps stay up, winning opportunities for David Beckham to show his set-piece ability which was largely squandered.

Alan Shearer constantly drifted out to the left touchline. This made Zanetti reluctant to get forward and, with Owen also dropping back, often left Argentina’s back three with no one to mark. Both Chamot and Rivas took the opportunity to drive forward and help the attack like liberi, but were unsure what to do when defending;Â  Chamot tried to free Zanetti by covering Shearer only for Scholes to exploit the space and almost score.

The one time no one was on that left flank, Zanetti motored down the right side unopposed and shot. Once England took the lead, Shearer and, less frequently, Owen tracked Zanetti down the right running deep into England’s half, creating a 3-6-1/5-4-1 when out of possession.

These two factors are shown excellently in Owen’s goal:

Owen picks up the ball near the half-way line, eases past Chamot, and is able to run into acres of space and score. Where is Shearer? Mostly out of shot on the left flank.

Argentina tried a similar tactic to less success. Claudio Lopez pulled wide and Neville followed him wide or Anderton took responsibilty for him. Like Scholes had done when Chamot followed Shearer, Ortega moved up into a striking position, but he only seemed to do so when Anderton was covering Lopez; this essentially played into England’s hands, creating a 2 vs 3 situation. The few times Ortega did take advantage of Lopez’s stretching of play, Ince generally covered excellently. This isn’t to say Ortega played poorly, he just wasn’t afforded the same time or space as Owen: a player not blessed with such good close control would have been completely anonymous.

Batistuta’s movement worked better than Lopez’s. He rarely moved out to the flank – instead, he drifted just far enough to ensure there was a notable gap between Campbell and his fellow defenders for the midfield to take advantage of, but not far enough for Campbell to designate Le Saux to pick him up. Several times one of the players you wouldn’t neccesarily expect to be there, such as Chamot, Rivas, Simeone or Veron, burst through and Campbell and Adams were forced to make impressive crashing sliding tackles.

The turning point of the game was Beckham’s dismissal. His assist aside, Beckham did little to repay Hoddle’s faith in him after picking him over the more defensive David Batty. His passing was uncharacteristically poor and so were his set-pieces (the latter was dismissed as the fault of the new lighter ball, ignoring he had scored an excellent free-kick in the previous game against Colombia), but the coup de grÃ¢ce was his kick at Diego Simeone – not just for its utter childishness, but the idiocity of doing it when the referee was 4 yards away and looking straight at him.

England switched to a 4-4-1 with Neville moving across to right back, Le Saux back to left back, Anderton into the centre of midfield, Scholes to the left of midfield and Owen and Shearer switching between the right and up front.

Scholes tended to drift inside, giving Le Saux space to attack, but was still defending like a wing-back, constantly pushing much higher than the rest of his defensive line and was substituted for Southgate with the pacier Campbell moving to left.

Shearer and Owen’s switching was fairly intriguing. Shearer’s bigger frame and command in the air made him an excellent target man for England’s now entirely direct play while Owen’s pace and trickery made him the more obvious winger. England looked better when the roles were reversed though: Owen’s pace offered the possibility of getting in behind Argentina’s defence and Shearer’s frame was made him a more forceful defender. It wasn’t unusual to see the lone striker drop back and join the midfield though.

Either way, the ball was always hit long to Shearer, who would hold it up for Owen or move up a bit and flick it on for Owen depending on which role he was playing. Owen’s main job was then to win a free-kick or corner; similarly, when the midfield won back the ball, they forcefully ran at Argentina with seemingly little purpose other than winning a free-kick. This appeared to be a good tactic as England looked strong from set-pieces after Beckham’s dismissal and were unfortunate that a Campbell goal was disallowed.

Very little changed about Argentina’s play, continuing to try to pass through England, and the game petered out to a penalty shoot-out.