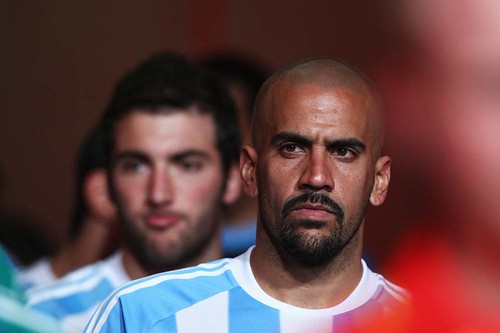 The element of timing in football shouldn’t ever be understated: the coordination of a footballer’s feet is the most important element in their career. Then there’s timing on a grander scale – in their movements around the pitch or, on a larger scale still, in their career movements. With his 36th birthday fast approaching, Juan Sebastian Veron can look back on an accomplished career that could have been made all the sweeter had he mastered that last factor.

Veron started his career at the same club that made his father, “La Bruja” Juan Ramon Veron, famous – Estudiantes. He played only sporadically in his two years there, managing just 22 league appearances before moving on for a brief stint at Boca Juniors, but showed the precise passing and set-piece ability that made his name.

It was time for La Brujita to take the European plunge, heading to Sven Goran Eriksson’s Sampdoria. They were on a downward spiral after the death of owner Paolo Mantovani, but were still bringing in the likes of Enrico Chiesa, Ariel Ortega, Vincenzo Montella, Clarence Seedorf and Christian Karembeu with Veron. He spent two years in Genova before joining the Parma revolution for their UEFA Cup and Coppa Italia winning 1998-99 season, after a decent World Cup in France, where England got their first taste of seeing him in action.

Veron had impressed enough to earn a £18 million move to Lazio, linking up with Eriksson again. It was in the Italian capital that he really confirmed his place among the best in the world. He sat fairly deep in the midfield, feeding Marcelo Salas, Claudio Lopez and, later, his former Parma teammate Hernan Crespo up front. Fellow Argentines Matias Almeyda or Diego Simeone did the dirty work in front of him, while Pavel Nedved and Sergio Conceicao mixed hard labour with creativity. With him pulling the strings, Lazio won Serie A and the Coppa Italia.

Lazio were set up to get the best of him and he was brilliant. When he made the £28 million move to Manchester, it was compared with Zinedine Zidane’s move to Real Madrid. Many suggested United’s was the better deal, which, although it seems silly now, was a fair point – United had got a cheaper deal for a younger player on a similar level.

Up until this point Veron had timed his moves to perfection. He had joined Sampdoria after their most successful spell but left before their relegation, and left Parma and Lazio before their financial meltdowns. Now was the time to balance it out.

Sir Alex Ferguson has often been accused of buying Veron without having an idea of how he was going to use him, which is a little unfair. Although he had won the Champions League just two years before, Ferguson wanted to adapt his game plan to a more thoughtful style – it is unfair to say United’s win was lucky, but it wasn’t done in the all-conquering style the best teams should aim towards.

“We got battered on the Âcounterattack by Anderlecht and PSV [in the 2000 group stages]. Teams had worked us out quite easily. We were a complete 4-4-2 team, relying on the wide players to do a lot of defending for us and attack. We got strung out in those games, so we had to start thinking about playing three central midfielders to make sure we were not exposed like that again.

“So there were disappointments like that but, as you go along, there is a way you find that is suited to playing in Europe. I think with the kind of midfielders I have, the three helps us in European football. You keep the ball better, are far more patient and have more control of the situation than we used to have.”

Veron was meant to be the solution to this: a metronomic figure to keep things ticking away in midfield, but United weren’t quite ready to make the leap in changing their style and Veron wasn’t quite up to the task. 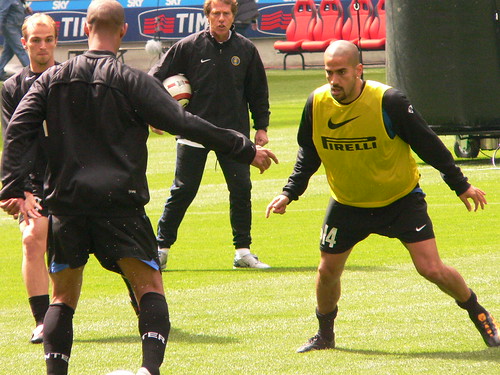 Part of La Brujita’s problem was his transfer fee. With a £28 million price tag, your game must be spectacular rather than the subtlety of Veron’s for it to be justified in the eyes of fans and hacks, especially in England where this role is rarely appreciated. At the turn of the century, the Premier League was still filled with energetic box-to-box types like Roy Keane who can do anything and everything; Veron came from an environment where the ball should do the running, not the player. Compared to them, it was easy to understand why Veron looked like a slow sideways-passing passenger to many.

Keane was a major problem for Veron. At Lazio, Almeyda was happy to win the ball back and leave the creating to Veron; Keane was more than just a destroyer and left Veron marginilised – too many cooks spoiling the broth. This meant Veron was shoehorned into a higher position, where less space was available, then eventually a right-wing position, while also seeing less of the ball. Just a few years later, Michael Carrick operated in a role better suited to Veron, albeit more defensively.

However, to some extent he was just a slow sideways-passing passenger. Although exacerbated by Ferguson’s tactics, Veron was struggling to adapt to the pace of the Premier League and, while never a sprinter, he wasn’t all that slow (looking at that England-Argentina game – Owen aside – he’s the most energetic player on the pitch), but a string of injuries played havoc with his fitness. It wasn’t just for United he was playing poorly either: he was awful as captain in Argentina’s appalling 2002 World Cup campaign.

Although he was regularly shining in Europe where United were forced to be more thoughtful, Veron failed to find his best form in the Premier League and moved on to Chelsea at the beginning of the Roman Abramovich era. Once again, he failed to leave any significant marks on the English game and was loaned out to Inter for several seasons. Back in Italy, his performances improved, but even there Inter had other players that could do what he did, making him a little unnecessary.

With his stock in Europe worth little now, it was time to heard back to Estudiantes and mimic his father’s achievements. Veron immediately settled back into the Argentinian league, helping them to win the 2006 Apertura. Injuries looked to cut him down again, but he returned on form for the 2008-09, reaching the finals of the Copa Sudamericana and securing a place in the 2009 Copa Libertadores.

Ever since Veron’s father won three consecutive titles between 1968-70, Estudiantes have had a special relationship with the Copa Libertadores, and Veron Junior dreamed of bringing back a fourth. Their first challenge was ended by eventual champions LDU Quito, but in 2009 they became champions again, with Veron voted player of the tournament on FIFA’s website.

After several years in the wilderness, Veron was reselected for the national team by Diego Maradona for the 2010 World Cup. He may have made a few poor career decisions, but his performances over the last few seasons shows class is permanent.

4 thoughts on “What Could Have Been: Juan Sebastian Veron”