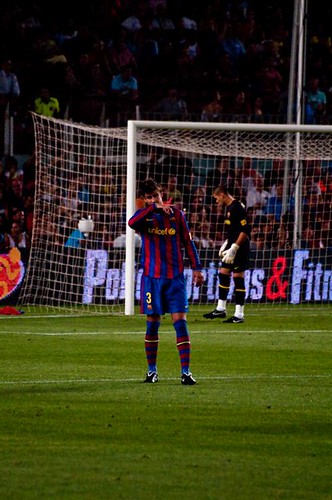 Barcelona are well known around the world for their impressive attack, but their defence is worth examination as well. This post presents the key facets of the team’s defence what the team does when they lose possession and how the team gets the ball back, based on the analysis of the games against Arsenal (both), Sevilla and Getafe.

1. High pressing in the opponent’s half is the core element of Barcelona’s defensive system

A. High pressing when the ball is lost in attack

When the team loses possession, Barcelona immediately start pressing in the opponent’s half.

The basis of the quick transition to tough-pressing is laid on the principles of their attacking organisation – focus on small passes, triangles of players over short distances, ball possession and the active participation of full-backs  (Adriano/Maxwell, Alves) high up the pitch. These kind of attacking actions require the concentration of the players near their teammate who has the ball. The individual distance between the players is close and allows immediate pressing when the ball is lost in attack.

The pressing is performed by the pair of closest players, in almost all the episodes – one of them (usually wide forwards) often goes from behind the opposition player.

Here are zones in which respective players perform pressing in most cases in case of the loss of possession:

It’s to be noted that if Xavi or Iniesta goes forward, like a burst into the penalty area, the holding midfielder (Busquets/Mascerano) takes his position immediately, allowing them to keep compact.

Also, one of the central defenders are ready to move forward in order to double up if there is a teammate in a 1v1 situation.

B. High pressing when opponent uses short build-up from the goal

Barcelona starts pressing from the first step of the opposition’s build-up, beginning around the penalty area of the opposing team.

The forwards actively press their respective opposition defenders as he gets the ball Messi actively chases the ball near the central defenders trying to direct them to the flank while Villa and Pedro stick tight to opposing full-backs in order to eliminate the easy pass.

In the case of a pass to the flanks, the respective wide forwards immediately press the defender, while the opposite wide midfielder drops down to close down any possible diagonal ball to the other flank.

Xavi and Iniesta are positioned near the holding midfielders of the opponent, closing another possible channel for developing attacks through the middle of the field. Iniesta sometimes moves forward to double up on the full-back with the wide forward on the right flank.

As a result, the player who gets the ball is not yet in complete control of the ball and is often forced to choose an unprepared long pass (or hoof if you prefer).

The full-backs of Barca (Adriano/Maxwell; Alves) are ready to move high up the flanks and chase opponents with the holding midfielder, in case of a forward pass down the flanks. Barca’s holding midfielder focuses on the possible recipient of the long pass as well.

2. How they counter counter-attacks

High pressing creates high risk and a temptation for the rival to play on the counter-attack (very often it’s the only available option for them). Moreover, the full-backs of Barcelona take active roles in the attacking of the team. The basis of their defensive success is the position of the holding midfielder and centre backs, who are responsible for covering their respective sides of the field, spreading wide, but also positioning more centrally.

Busquets is in the centre – higher or between them – and he is the first one to meets the opponent with the ball if they overcome Barcelona’s pressing.

The full-backs run back immediately to take their own position and, depending on the situation, one can take up the position of a central defender in the defensive line.

They position themselves in a 4-1-4-1 positioned high in their own half, which allows for the interception of the ball high from their own goal in decent numbers usually starting to challenge for the ball near the centre circle. The team is positioned compactly, spread over around 25-30 meters.

The holding midfielder acts as libero, just in the middle field providing cover and aggressively tackling the opponent if they pass through the midfield line.

The defensive line is positioned high, keeping the compactness between the lines, while the full-backs move higher to partake in pressing and the wide forwards close down respective opponent’s fullbacks.

4. Technical side of the defensive actions.

The players defend rather aggressively not battling the opponent, but pressing him hard quickly coming near the opponent with ball, trying not to give him time on ball.

In pressing the team usually double up the player with ball. To press with two players seems to be the standard, getting a numeric advantage in the zone of the ball. The forwards never have a rest if the ball is down the field – they drop and run at opponent from behind.

If the opponent’s player overcome the pair of players, the holding midfielder immediately challenges for the ball – Mascherano the fiercer selection.

The full-backs are likely to attempt to intercept passes, getting close to the opposition wingers, in their own half.

5. Possible ways to crack the defence

a) Usually the opponent has few attempts to threaten Barca’s goal, but here’s a pattern of an opponent’s dangerous attacks.

Dangerous for Barcelona were attacks through centre when:

* creating a numerical advantage between the lines in the zone of holding midfielder with a dropping forward and attacking midfielder.

* the midfield is overcome by one-two combination or individual run of the opponent.

As the midfield is passed, Busquets goes forward to press the opposing player and, as a result, the central defender has to advance to cover the zone between the lines, trying to intercept the ball if it’s meant for an attacking midfielder. This movement opens free space behind for through pass. Pique in particular is more inclined move high up to try to intercept.

In the case of a full-back’s movement to cover this space, free space is left on the respective flank.

Sevilla’s goal reflects this, and these kinds of attempts were noticed in every analysed game, except the second leg against Arsenal. Examples can also be seen involving Real Madrid, such as their goals against Atletico and Racing.

b) A diagonal ball to the flanks for pacey forwards on the counter-attack, attacking the space left by Barcelona’s attacking full-backs.

You can follow Petr on Twitter or read more from him on his blog A Little Bit About Tactics.

6 thoughts on “Barcelona: the key elements of defence”