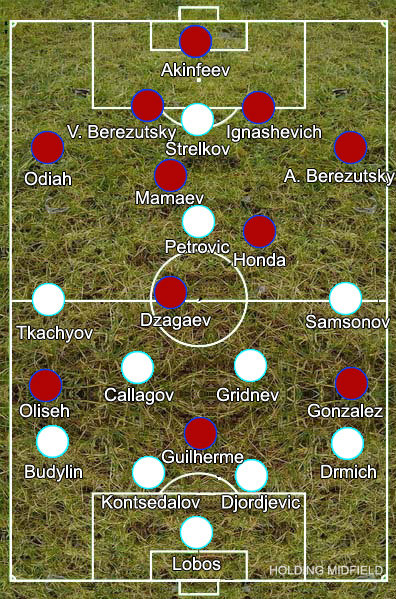 A return to the Metallurg stadium for CSKA Moscow manager Leonid Slutsky was extremely comfortable. Playing against the cash-strapped team he departed from last year, his team barely had to turn up let alone get out of first gear to get a win over Krylya Sovetov, showing exactly why they’re footing the table in the Russian Premier League.

Krylya Sovetov were woefully bad. Their most realistic goal of nicking a draw was ended after just 7 minutes when they gave away a stupid penalty and Alan Dzagoev sent Eduardo Lobos the wrong way. From then on CSKA were pretty much in control.

They allowed Krylya to have a fair amount of the ball and the team from Samara looked better than they had for most of the season, managing to string more than 2 passes together. There was little penetration in their passing though and it would inevitably end with an over-hit or misplaced pass.

Once relinquishing possession, they sat back in two bands of four while Petrovic and Strelkov lightly pressured the defence and holding players. They were still fairly easy to pass through though and Goran Drmich, perhaps wary of Mark Gonzalez, should have been playing narrower. As the game wore on, they pressed CSKA more and Honda occasionally took advantage of the space created to play higher up the pitch.

If Krylya were going to get anything from the game it was going to come from Oleg Samsonov. The 22 year-old looked quite dangerous when running at the CSKA defence – at one point pulling off a nice pirouette that looked out of place in such a poor team – but he became increasingly frustrated at the passes that were being hit way too far ahead of him. Samsonov’s attacking presence meant Gonzalez sometimes tracked back to help out Berezutsky, although this was quite rare and he generally stayed in the front three. Daniil Gridnev also looked decent. His long sweeping passes were generally accurate and he was usually the quickest to race back when CSKA counter-attacked.

They didn’t look like they were going to get anything from the game though. Petrovic was clearly struggling to create anything and Strelkov became very isolated. His evening was summed up by a 35 yard volley towards the end of the first half and was replaced by Evgeni Savin for the second half, who didn’t fare much better.

With Gonzalez partially sidetracked by Samsonov, Sekou Oliseh’s role in place of the Juventus-linked Milos Krasic was made more important. Oliseh had a mixed game. He hugged the touchline, giving CSKA width, and his pace was very useful when they counter-attacked. However, much like Theo Walcott, he suffers from hit-and-run syndrome; his pace meaning he can generally catch up with any ball, he kicks it quite far ahead of him, but it means he doesn’t ever really have much control. For every nice move, there were 3 where he would end up shackled in the corner. There was one moment when he picked the ball up and was in a good position to cut inside and shoot, but his touch was huge and a centre-back easily dealt with it.

CSKA were very sloppy, and gave away stupid fouls.  A deflection off Mark Gonzalez almost sent a Krylya free-kick into the net, only Igor Akinfeev’s quick change of direction saved them from a tougher job than it needed to be. They often gave the ball way too, forgivable for a team set to be relegated, not for wannabe champions. Although Krylya didn’t really manage to carve out any genuine opportunities, Savin was unlucky not to score with a late header – a reminder that CSKA could have easily been punished for their complacency.

A poor game all round. This is what we’ve come to expect from Krylya, but CSKA appeared to be doing the absolute minimum needed to win and will surely need to be better than this if they want to win the Premier League.