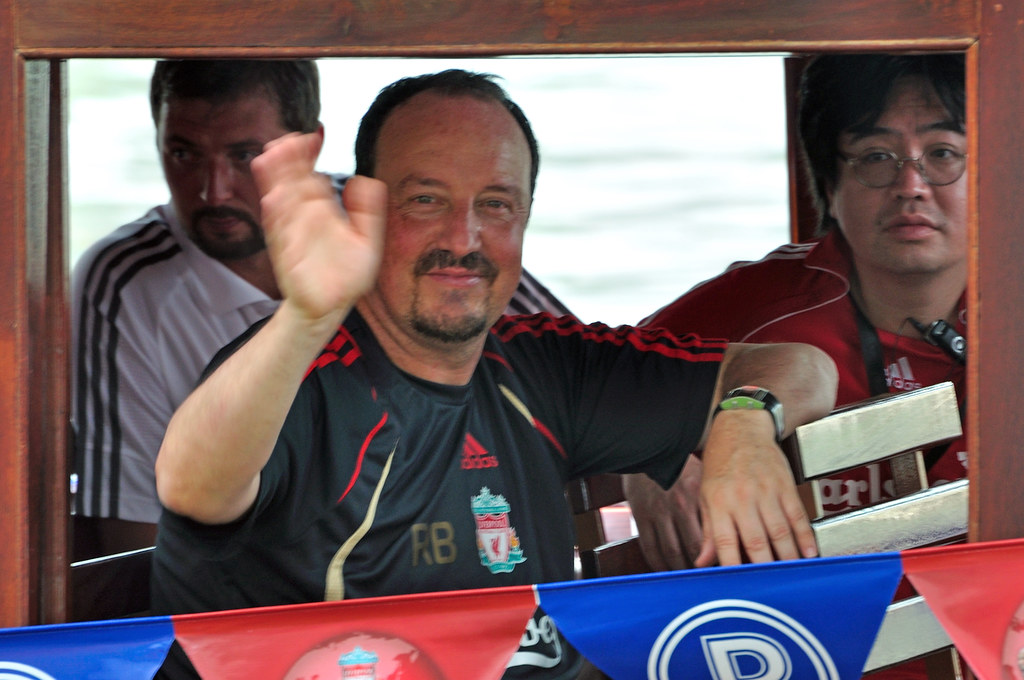 We have since done another (better) post on Rafa Benitez’s Liverpool.

A 7th place league finish and a group stage exit in the Champions League ended Rafa Benitez’s time on Merseyside. Whether it was wrong or right to let him go or whether his time in charge of Liverpool could be considered a success or not, there is no denying that Benitez cut an interesting figure at Liverpool.

With him now at Internazionale, we can look at the unfinished system that made Liverpool, if only for a short time, the most feared club in European football.

Benitez is a known admirer of Arrigo Sacchi, calling him “the greatest coach of the modern era” and giving tapes of his Milan side to Jamie Carragher to learn from, and much of his system is based on Sacchi’s philosophy, an extension of Valery Lobanovsky’s “Universal” Dynamo Kyiv and Rinus Michel’s Total Football.

The mentality is particularly key here; each player needs to know what they need to do and how to go about it. With this in mind, it’s strange that Steven Gerrard is such a key part of Benitez’s Liverpool. Sacchi himself said: “Gerrard’s a great footballer, but perhaps not a great player.

When I was director of football at Real Madrid I had to evaluate the players coming through the youth ranks. We had some who were very good footballers. They had technique, they had athleticism, they had drive, they were hungry.

“But they lacked what I call knowing-how-to-play-football. They lacked decision making. They lacked positioning. They didn’t have the subtle sensitivity of football: how a player should move within the collective. And for many, I wasn’t sure they were going to learn”.

â€œYou see, strength, passion, technique, athleticism, all of these are very important. But they are a means to an end, not an end in itself. They help you reach your goal, which is putting your talent at the service of the team and, by doing this, making both of you and the team greater.”

It’s this line of thinking that saw Gerrard shackled to the wing at the start of his time with Benitez and was only given a role in the centre higher up the pitch, where his positional wanderings wouldn’t be as significant. 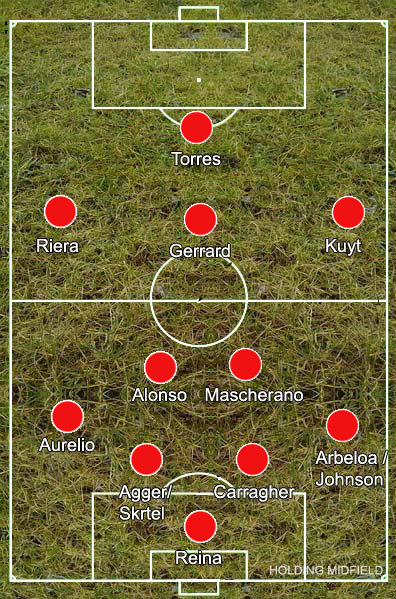 Oddly enough, Benitez uses a formation that Sacchi is skeptical about: the 4-2-3-1. Debates rage on about who the first teams to use the 4-2-3-1 were – the Man United side with advanced wingers, holding midfielders and Cantona dropping back into the hole could claim responsibility – but Benitez was among the first to use four distinct bands with a midfielder in the 3 rather than a forward dropping back. Sacchi dislikes the formation for this splitting up into bands as it encourages “the proliferation of specialists.” Sacchi continued “In my football, the regista – the playmaker – is whoever had the ball. But if you have Makelele, he can’t do that. He doesn’t have the ideas to do it, although, of course, he’s great at winning the ball.”

He might have a point. A look at the recent 4-2-3-1-playing Netherlands team shows a “broken” side; none of their defence do much attacking and Robben, Sneijder and van Persie don’t do much defending. The exceptions to this are van Bommel and Kuyt, the latter a Benitez player. This is part of the problem that Liverpool faced once Alonso left; although Lucas and Mascherano are better passers than they are often given credit for, neither had the ability to link the defence and attack like Alonso did.

Why then does Benitez favour a shape that his role model disagrees with?

Based around the principle the idea that a 4-4-2 is best for direct play and a 4-5-1 is best for keeping possession, the 4-2-3-1 allows for both making it a formation best suited to a universal style of play as it is similar to both formations. That 2-3 adds up to 5, ensuring it’s undoubtably a 4-5-1, while all it needs is Gerrard to push on as he so often does to create a 4-4-2.

Football has changed. Sacchi’s favoured 4-4-2 is difficult to employ at the highest level now as players can easily get between the lines. The presence of two holding midfielders make it difficult for these kinds of payers to operate. Also, total football’s ideal of making the pitch small in defence is easier to achieve with a five man midfield. It’s easier to keep possession and, once lost, you can get 10 men behind the ball, shrinking the area the opposition has to play in. Sacchi’s Milan got around this with a high pressure game, something Benitez didn’t necessarily always use.

Pressuring the opposition players is an excellent way of compressing the space; the less time someone has the ball, the smaller the area he has to play the ball into becomes. Also, winning the ball as high up the pitch as possible gives you a greater chance of scoring. It’s along the same principle of danger areas that led Charles Reep to declare that long balls were the way to win, but, rather than possibly relinquishing possession by repeatedly hitting it into this area, it’s about regaining the ball there. Gaining the ball as close to goal as possible allows a more direct route to goal, increasing the chances of scoring.

The flipside to this kind of pressing is that it’s very tiring for the players doing it, and so part of Benitez’s success at Liverpool was that the players knew when to sit in front of the opposition and when to harass the opposition. The issue of fitness is very important in the Benitez system, and is the reasoning behind one of the methods he’s been most criticised for: rotation.

The system needs fit players to act at its most efficient. Within the sytem, an unfit player is no different from someone like Riquelme who won’t defend: he doesn’t press effectively. This is why you’ll rarely see Benitez risking players returning from injury, but you will see him substituting a forward or winger after 80 minutes. They are the players that have to press the most, while the defenders, in theory, should barely have to.

The alternative of sitting back and letting the opposition have the ball gives the forwards an opportunity to recover for another period of pressing. Their solid defence meant Liverpool were happy to sit back and exchange long balls; it allows the forwards to recover, but also forces the opposition to alter their style. If long balls don’t work, the opposition are forced to try to play their way through, leaving gaps for Liverpool to exploit on the counter-attack. In addition, the completeness that universality pushes towards means that the long balls could be realistic goal-scoring opportunities for Liverpool’s forwards such as Fernando Torre’s goal against Blackburn or Robbie Keane’s against Arsenal.

In possession, the five man midfield made it easier to maintain possession – indeed, the 4-2-3-1 seems to naturally encourage passing triangles – and the players’ ability to interchange positions made them difficult to track. While Sacchi’s problem with the 4-2-3-1 was that he thought it was essentially 6-4, with universal players it can easily be a 2-2-6 when attacking.

A run through of the players shows that everyone was capable on the ball or was able to play in a different position.

Pepe Reina was the best sweeper keeper in the world and his excellent distribution could start many attacks for Liverpool. Daniel Agger and Martin Skrtel were calm and assured on the ball, particularly the former who could also fit in at left-back, while Jamie Carragher wasn’t as technically gifted but could fill in at right-back. Fabio Aurelio had a sweet left foot and could operate as a holding midfielder or on the wing as well. Alvaro Arbeloa was able to play anywhere along the defence and was decent going forward. He was replaced by Glen Johnson who had played much of the previous season at Portsmouth on the right side of midfield and was brought in for his noted attacking ability.

Lucas Leiva and Javier Mascherano were primarily defensive, with their main job being to win it back for Xabi Alonso, but both were capable on the ball and could often be seen lingering outside the opposition penalty area, ready to shoot. Any of the front 4 were interchangeable; Torres would often move to the flanks, Kuyt arrived at Liverpool as a striker with an impressive scoring record, Gerrard could link up with Torres, shift to the flanks or come deep and so on.

The only player who doesn’t fit this mould is Xabi Alonso. Although better defensively than someone like Pirlo, Alonso was a base playmaker in charge of “quarter-backing”. His role was primarily attacking as he was in charge of creating, but he operated in a defensive area, meaning he made the pitch smaller for the opposition. However, he was one of Liverpool’s most limited players as he was unable to play in any other positions. Benitez originally wanted both him and Gareth Barry, but was told by the board he could only have one and seemingly picked Barry, the more versatile player, and ended up with neither. Instead he got Alberto Aquilani, another player capable of operating in that front 4 or as a link between the defence and attack as Alonso had done, but was injured for most of his last fateful season.

The issue with this is that players that can do anything are generally hard to come by and, when you do, they’re expensive. While Sacchi had Silvio Berlusconi bankrolling him, Benitez found at both Valencia and Liverpool that he didn’t have the necessary spending power to upgrade his “Crushing Machine”. This was a particularly big issue when signing attackers as most either don’t have the skill to play the role he wanted or didn’t have the mentality, those that had both cost upwards of £20million.

Put as succinctly as possible, Benitez’s Liverpool machine could control the game in and out of possession, on the ground and in the air, but it never quite had the right cogs to be considered truly great.