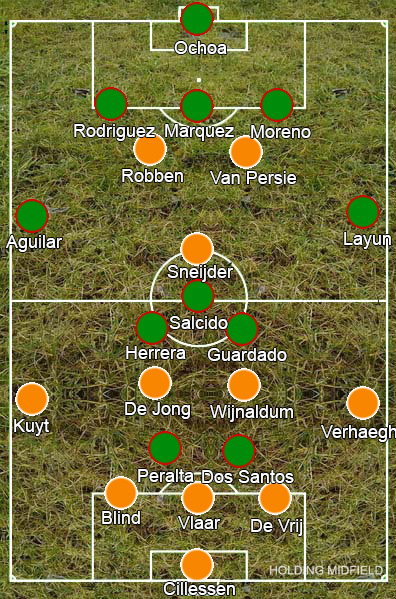 Carlos Salcido replaced the suspended Jose Vasquez in Mexico’s 3-5-2, while Robin van Persie came back into the starting eleven along with Paul Verhaegh at right wing-back in the Dutch 3-4-1-2.

The heat was hugely influential in the game. With each team’s shape cancelling the other’s out, the early portion of the match was generally about who was better at their gameplan. Mexico are the more dominant team in possession and took better control than the Dutch, although Arjen Robben remains a constant threat on the counter, but the initial chances of the game all came from sloppy mistakes. Passes curled out of play and simple balls overran their man – both teams looked tired from the off and the only logical explanation was the glaring sun overhead.

Mexico’s superior play eventually won out with a moment of magic from Giovani dos Santos, and Louis van Gaal near-immediately changed to a 4-3-3 as they had against Australia, bringing on Memphis Depay for Verhaegh. Their counter-attacking play couldn’t work if the opposition no longer needed to come out and attack them, so they changed to a comparatively patient strategy more in keeping with their traditions. The overall change in strategy was made all the more clear when the quiet Robin van Persie was replaced by Klaas-Jan Hunterlaar – a much more limited striker, but one who would stay around the penalty area to poach a goal.

Mexico sat off and looked to defend their lead. Initially when they won back the ball they would look to wear the Dutch down by passing it around as they chased, but as the half went on they took to just punting it down-field to forwards unsuited to this kind of game, meaning the Dutch would just comeback with another attack.

The narrowness of Mexico meant the Dutch had to work the ball down the wings, which actually really suited them. While excellent in open play, the Mexican have relied on Guillermo Ochoa to save them when defending set-pieces, most notably against Brazil, and the Dutch constantly having to go wide meant they won a lot of corners. Having gone into double figures on the corner count, Wesley Sneijder’s smash into the net was inevitable really. In injury time, Robben went round the outside again and was “tripped” by Rafael Marquez to win a penalty.

For the second time in two days, one of the most exciting teams of the tournament have been knocked out by a dull giant thanks to a penalty kick.