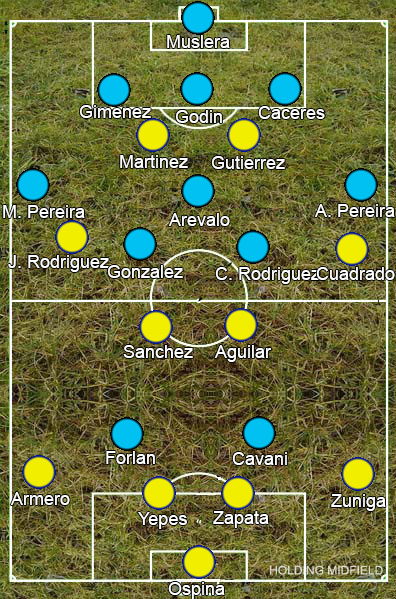 The second South American clash of the day was less tantalising than the first.

Luis Suarez’s ban left an already functional at best Uruguay side lacking invention. Diego Forlan replaced him and Maxi Pereira came in for Nicolas Lodeiro as Oscar Tabarez continued with the 3-5-2 used against Italy in the final group game. For some reason, Jose Pekerman chose to deviate from the 4-2-3-1 used to such success in the group stages, opting instead for the 4-4-2 used in qualifying. Maybe he thought it might be a good idea to have another strong attacker in the mix against the tough Uruguayan defence, but really it only played into their hands.

The gameplan was clear: Uruguay sat back and looked to soak up Colombia’s attacks, forming a backline of five and a band of four ahead of them, with Edinson Cavani dropping deep to help defend. Colombia are at their best playing quick attacks down the right, with the pace of Juan Cuadrado a major asset on the break. Here they were denied this option and forced into being more patient. It worked well until James Rodriguez sent a volley spinning past Fernando Muslera – a goal out of nothing from the tournament’s stand-out player so far, but one that now forced Uruguay into attacking.

Uruguay were immediately more proactive, pressing high up the pitch, but truthfully they never really looked like coming back. Not long after half-time, Rodriguez got a second from a great team move.

Now with a comfortable lead, Colombia sat back more. It must be said they never really look comfortable doing so and here they surrendered a number of decent chances to a Uruguay team devoid of much creativity. Despite throwing on several attackers as a last throw of the dice, Uruguay couldn’t muster up anything resembling a real fightback.

Not one that comes as any great surprise, but there’s definitely things that need work if Colombia are going to progress past the admittedly lacklustre hosts.