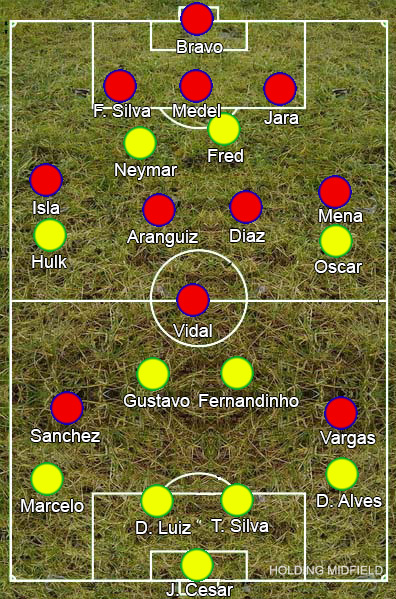 The most anticipating clash of the last sixteen was up first, and it certainly didn’t disappoint. The hosts squaring up against the most exciting team of the group stages.

Brazil have been using something between a 4-2-3-1 and a 4-4-2 throughout the first stage, yet here it was much closer to the latter, with Neymar frequently the highest man up the pitch ahead of Fred. Chile have switched between a back three and four depending on the opposition and made the right choice today with a 3-4-1-2.

The game started off at a frenetic pace that should have suited Chile well, but it was the Brazilians who looked most comfortable in the opening stages due to a combination of factors. Presumably worried about the pace of the Chilean forwards getting behind them and the success the Dutch had in denying them any space to break into, the Brazilian defensive line sat deep. Rather than all sitting back and allowing Chile to control the game, their attackers pressed with the same intensity we have come to expect from Chile rather than Brazil. It worked brilliantly as Chile couldn’t get the ball out of defence and Brazil broke up play with a well-placed strategic trip whenever they did manage it.

Brazil’s combination of pressing in attack and deep defence meant the pitch was massively stretched. Chile were unable to use this to their advantage, but Brazil coped much better. Chile’s pressing wasn’t as effective as it has previously been because they had to cover so much more ground to get to the opposition in midfield and the Brazilians stormed through that midfield area several times – Luiz Gustavo and Hulk both winning fouls early on after picking up the ball in midfield and running straight at the defence.

However, it was from a set-piece that Brazil got the lead. Chile’s problem defending set-pieces due to their lack of height is old news by now, so it didn’t really come as much of a shock when David Luiz (supposedly) turned in a corner.

Brazil eased off and let Chile have the ball after the goal, and it wasn’t long before Chile had their equaliser. Partly through Brazilian ineptitude and partly through their pressing, Chile managed to snatch the ball in the corner from a throw-in and Alexis Sanchez was on hand to finish with aplomb. It was reminiscent of a move Marseille used to use: Didier Drogba would smash the ball out for a throw-in deep in the opposition’s half from kick-off, and Marseille would push forward to pen them in close to their own goal.

The game’s fast pace wasn’t sustainable though and Brazil sat back more rather than pressing in the second half, gifting Chile control of the game. Chile gradually became too tired to perform their strategy at full pelt any longer and the game settled down like the last few rounds of a boxing match, teetering around with the occasional flail towards the opposition.

Even when the game slowed, all the players were so dead on their feet it still looked like either team was on the brink of scoring. Penalties were the perfect ending for such a dramatic match and, while it’s sad Chile have been knocked out, they exited in one of the best games of recent tournaments.