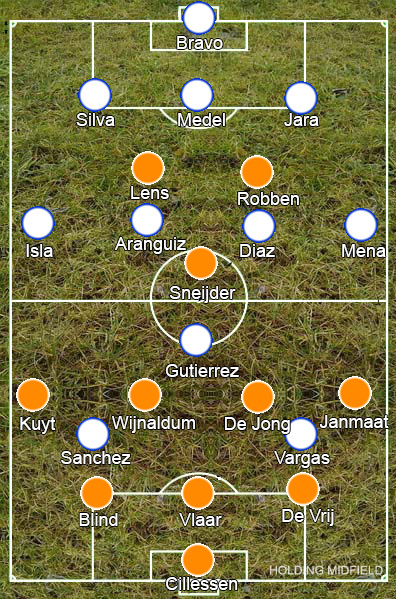 Both teams sealed qualification with wins in their second group game – Netherlands edging past Australia and Chile dominating Spain. There was still the matter of who was going to top the group to decide though, and the Dutch’s thrashing of Spain meant they had the superior goal difference.

Here they looked content to settle for a draw and frustrate Chile. Both teams opted for a 3-4-1-2, with Jeremain Lens replacing the suspended Robin van Persie, Dirk Kuyt in for the injured Bruno Martins Indi and Georginio Wijnaldum in for Jonathan de Guzman, while Arturo Vidal was given a chance to rest as Felipe Gutierrez came in.

The Dutch sat fairly deep in midfield and tracked the Chilean midfield closely, as the South Americans rotated in search of space. They offered little going forward, hitting long balls towards the forwards, yet the pace of Arjen Robben ensured they were always threatening with this approach. Chile passed and passed, switching positions at will, but rarely looked like scoring. It was an reminder that this Chile side isn’t patient despite their short passing game, and are at their best when they have space to break into quickly – the Netherlands denied them this and they struggled to create.

The Netherlands gained the lead when substitute Leroy Fer headed in from a set-play. Chile being the smallest team at the tournament makes them a worry at set-pieces, but this goal was as much about organisation as their height disadvantage – Fer finding himself unmarked. Memphis Depay doubled their lead in extra time when Robben darted behind the Chilean defence on the counter to cross for the the PSV Eindhoven man.

The Netherlands aren’t particularly exciting, but the speed of Robben means their counter-attacking strategy suits them well. Chile are arguably the most impressive team of the group despite finishing second, but they have fairly obvious weaknesses and coming up against a team that aren’t looking to dominate could pose them problems.