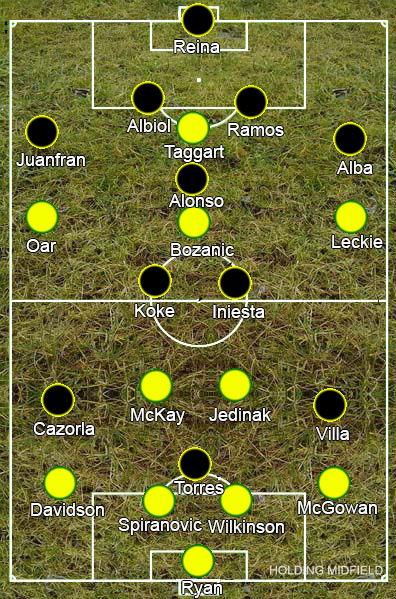 If you had suggested the final group game between Spain and Australia would be a dead rubber prior to the World Cup, most would have assumed it was because Spain had already sealed qualification from the group. A thrashing at the hands of the Netherlands and an even worse performance against Chile meant it was a rather more sombre affair.

By contrast, Australia had actually given an impressive account of themselves in their games against Chile and the Netherlands, but were guaranteed to go home too.

Ange Postecoglou made two changes, bringing in Oliver Bozanic and Adam Taggart for Mark Bresciano and the suspended Tim Cahill, while Vicente del Bosque made wholesale changes, reuniting the Euro 2008 striking partnership of Fernando Torres and David Villa that started Spain’s success and rewarding Koke and Juanfran for their impressive year at Atletico Madrid among others in a 4-3-3.

Australia started the match brightly, pressing intensely high up the pitch to disrupt Spain’s passing rhythm just as Chile had done. Bozanic was doing a particularly good job staying close to Xabi Alonso, who was forced deeper and deeper into the defensive line in order to find space to pass the ball out.

As the half wore on, Australia backed off though – their pressing presumably unsustainable in the afternoon sun – and Spain gained complete control of the game. Shortly before half-time, Andres Iniesta slid a ball between the full-back and centre-back for Juanfran to run onto and square to the waiting Villa to score on his last international appearance. You could criticise Australia for giving Iniesta the opportunity to play the same dangerous pass he and Xavi have played a million times for Barcelona, but it was still an extremely difficult pass to pull off in this instance and showed the gulf in quality between the teams despite their similar fortunes.

Australia had tried to attack down the wings as they did in the previous two games, yet Spain sat back when they had the ball, denying them the space in behind they needed to attack, and Australia failed to muster a shot on target.

They managed to reinvigorate some pace back into the game with a decent spell of possession and by starting to press again, only for Iniesta to again slide a ball between the full-back and centre-back for Torres to finish. Substitute Juan Mata made it three with a shot through Mathew Ryan’s legs.

A consolation victory that will feel ultimately hollow in the circumstances for Spain. It’s a shame Australia leave the tournament without a point for their hard work, but they were drawn in an extremely tough group and each result has been fair.