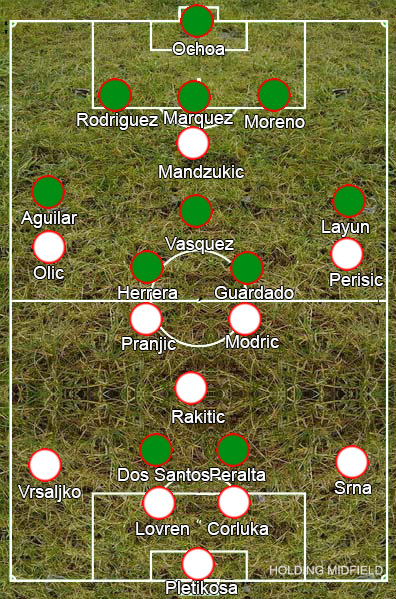 Much like the game between Chile and the Netherlands earlier in the day, the strategy of this match was decided by each both sides’ standings within the group. A win against Cameroon and draw against Brazil meant a draw would see Mexico through, whereas a loss in their opener against Brazil meant Croatia would have to go for a win.

Niko Kovac made one change to the team that beat Cameroon, bringing in Sime Vrsaljko at left-back with Danijel Pranjic moving into the midfield at the expense of Sammir, reshaping to a formation more akin to a 4-3-3. Mexico once again went unchanged.

The key area for both teams so far has been out wide, and this was no different. The Mexican wing-backs were left to Vrsaljko and Darijo Srna to defend, with Ivica Olic and Ivan Perisic remaining high. This put them in a constant three versus three situation against the Mexican centre-backs and Croatia looked dangerous in the opening stages.

However, Mexico did not need to win the game and it wasn’t long before Paul Aguilar and Miguel Layun were more conservative in their positioning, giving Mexico a two man advantage in defence that meant Rafael Marquez could step out to help the midfield if needed.

The Mexican wing-backs pulling back meant Vrsaljko and Srna were free to venture forward though and Andres Guardado and Hector Herrera were forced into shuttling across.

Kovac was forced into being more attacking as the game went on, first bringing on Mateo Kovacic, then Ante Rebic out wide. Marquez’s goal from a corner meant they had to go all out in search of a win though – striker Nikica Jelavic came on for Pranjic, who was now playing in defence, and Croatia formed a makeshift 3-3-4. This unsurprisingly left their defence massively stretched and Mexico were able to seal the win with goals from Guardado and substitute Javier Hernandez.

The expectation before the tournament was that one of these teams would be knocked out at this stage, but it is still a shame to lose one of them. The end result is probably preferred though, as Mexico have been one of the stand-out teams of the tournament so far.