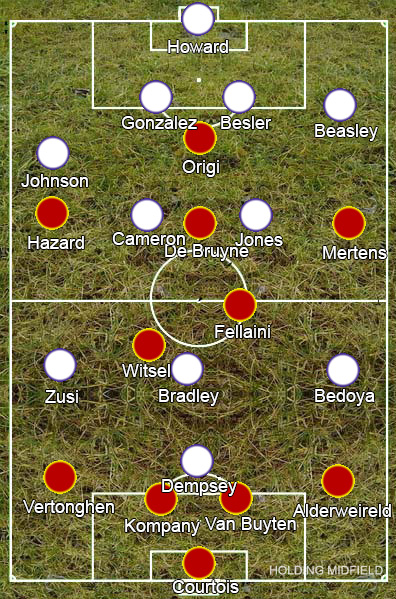 The group winners had a flawless record going into the final game of the last sixteen, leaving it to Belgium to complete the set. They took a 100% record from Group H, but didn’t really impress and the United States had every right to be confident of heading through to face Argentina.

Both teams lined up in 4-2-3-1s, with Belgium reverting to the eleven that beat Russia minus injured Thomas Vermaelen at left-back and underperforming Romelu Lukaku, Jan Vertonghen and Divock Origi standing in, while Jurgen Klinsmann brought back Alejandro Bedoya for Brad Davis on the left and replaced Kyle Beckerman with Stoke City defender Geoff Cameron in midfield after losing to Germany.

The key battle in this game was set up to be Fabian Johnson against Eden Hazard. The Chelsea has been underwhelming thus far, yet he is the only Belgian attacker who can genuinely claim to be world class, meaning Johnson would have to keep close to him. Nevertheless, Hazard doesn’t track back and Johnson has arguably been the biggest threat for the United States storming up from full-back. Would this be like against Portugal, where Ronaldo’s refusal to track Johnson surrendered the Portuguese control of the match, or like France against Switzerland, where Karim Benzema’s positioning repeatedly caught Stephan Lichtsteiner high up the field when the ball broke? It ended up being somewhere in between – Hazard was quiet again and Johnson seemed to get the better of Vertonghen early on, but was carried off injured half an hour into the game. DeAndre Yedlin replaced him and had an even better game.

It wasn’t just Yedlin and Johnson though: every time they won back the ball the United States broke quickly and in big numbers, which ensured they had a strong attacking presence and worked well against Belgium’s immobile holding pair, but was problematic. Firstly, they were rarely keeping good possession of the ball – there were periods when they hung onto it, however they were obvious attempts to rest rather than build attacks – and their chances all came from quick breaks downfield, meaning several of their players were having to constantly cover huge distances at great speed. Secondly, committing so many men forward meant they were making it easy for Belgium to counter themselves when, outside of these counters, the United States had seemingly outfoxed the Europeans.

There was actually a surprising amount of space in midfield that was rarely exploited, but the United States’ tendency to form two narrow banks of four when defending seemed to have convinced the Belgians that they had to play it out wide. Given Belgium’s biggest issue is their lack of natural full-backs, this seemed a weird tactic but Toby Alderweireld was one of Belgium’s better players and Vertonghen grew more confident as the game wore on. What made no sense was the use of Marouane Fellaini: he had been introduced in the opening game against Algeria for exactly this kind of strategy, yet here he was playing deeper in midfield, meaning he was rarely able to push up into the box to act as an aerial target.

Belgium were having the better of the game, but their strategy avoided making use of the space available through the middle or making use of the big massive player who could actually make it work, currently stranded near his half-way line as five American midfielders sprinted past him for the hundredth time. Origi stood out as a constant threat from counter-attacks due to his pace and pulled out into the channels effectively too, while Kevin De Bruyne buzzed around well behind him, but Hazard was quiet again and Dries Mertens wasted with this strategy. The game was great to watch as the ball zipped from one end to the other, yet neither side frequently looked like scoring outside of these counter-attacks.

Lukaku replaced Origi at the end of normal time and had already done more in two minutes than he had in any of his starts in the group stage, out-muscling Matt Besler from a counter-attack to race in behind the United States defence and square for De Bruyne to finish. It was the United States’ lack of technical quality that had undone them again however – they were working the ball forward with some patience only for Michael Bradley to cheaply squander it with a horrendous touch, just as he had for the Portuguese equaliser. They immediately jumped in and won it back, but within seconds Clint Dempsey had turned into two Belgian players with Yedlin free down his right, and the ball emerged from Alex Witsel’s tangled legs to substitute Kevin Mirallas, who immediately played in Lukaku. All their good work over the 90 minutes was undone with a handful of silly touches.

The goal meant that the United States were forced into attacking in numbers, leaving them even more open to counter-attacks. Just before the end of the first half of extra-time, De Bruyne returned the favour for Lukaku, who lifted it over Tim Howard. Julian Green offered some hope at the death, darting behind the Belgian defensive line to snatch it past Thibaut Courtois, but it was the movement of Dempsey that created the goal – he dropped off the frontline, pulling Vincent Kompany and Daniel van Buyten slightly forward so that Green could go one-on-one with the keeper.

While they have been great value, this United States side have been poor technically and organisationally. In each of their games, they have relied on graft and hard running to make up for their limitations and have been somewhat fortunate that their opposition were for the most part inept. This wave of feeling could be a great building block for the American team in years to come, but this set of players specifically shouldn’t be considered something to build upon – they tried incredibly hard, but they had to if they were going to compete.

Lionel Messi against Fellaini should be a laugh though.