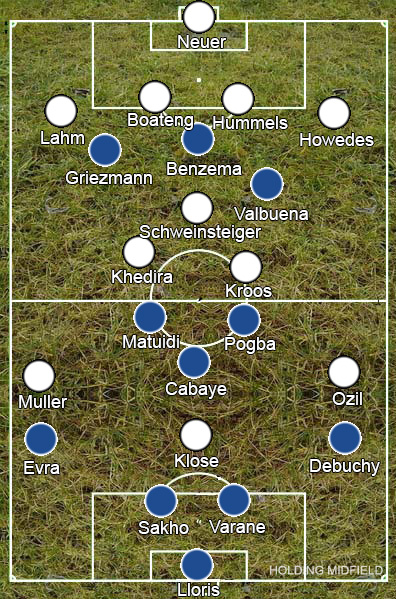 The only all-European quarter final was lined up to be an entertaining affair. The French had looked like the strongest team left in the tournament during an admittedly weak run to the last eight and Germany looked convincing albeit dull until their weaknesses were left bare for all to see against Algeria.

Joachim Low made a number of changes, with Philipp Lahm moving back out to full-back and Per Mertesacker, whose lack of pace was most obviously exposed by the Algerian, dropping to the bench, while Didier Deschamps brought back Antoine Griezmann and fit-again Mamadou Sakho into the side, Arsenal pair Olivier Giroud and Laurent Koscielny joining Mertesacker among the substitutes after failing to impress against Nigeria.

The match generally had a weird feel to it. The middle was congest, but Germany generally kept hold of the ball well – less sterile than they had been previously but still not really penetrating France, with the multiple changes to the line-up not actually changing the system at all. The lack of possession was clearly a problem for France as it meant they weren’t able to create chances of their own, but they also didn’t want to press the Germans too much as they wanted to draw them up the pitch and counter into the space behind them.

They struggled to get the ball out quick enough to catch Germany on the counter however, with Yohan Cabaye having a particularly bad game, and so Germany, while still playing a high line, would always retreat enough during the forced patient build-up so that the French could only dart behind a handful of times over the course of the game.

Germany scored from a set-piece and otherwise only mustered a couple of chances when the game was stretched. This essentially left the game to whether or not France could provide any reply, which they comprehensively failed to do – they had absolutely no alternative way of getting the ball forward and Deschamp’s change to a 4-2-3-1 by substituting Cabaye for Loic Remy did nothing to change their actual gameplan. The removal of Mathieu Valbuena for Giroud was even worse: Giroud may be likely to finish a chance, but they weren’t creating any so removing one of the few players capable of providing that creativity didn’t make sense.

What had been up to that point a promising World Cup campaign for France after the series of messes that have plagued them since Zinedine Zidane’s retirement ended with one of the most pathetic, gutless displays of the tournament. Not that they looked particularly bothered about it.