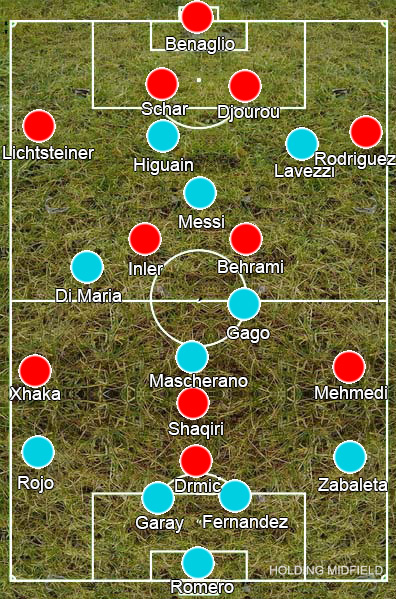 Argentina edge ever closer to claiming victory on their bitter rivals’ soil, but they aren’t half making hard work of it. They emerged as winners in each of their group games against Bosnia & Herzegovina, Iran and Nigeria, yet scraped through every game. Reliant on Lionel Messi to attack and Javier Mascherano to defend, no one really seems to be enjoying themselves.

Ezequiel Lavezzi replaced Sergio Aguero as a more flexible option at the head of Argentina’s 4-3-1-2, while Switzerland made no changes to the 4-2-3-1 that beat Honduras.

The pattern of the game here was very simple: Switzerland were well-organised defensively and Argentina had little way of breaking them down. Switzerland looked to attack through their full-backs but Lavezzi and Angel di Maria played quite wide meaning they weren’t free to venture forward. The only element of the game that wasn’t cancelled out was Xherdan Shaqiri, who moved from inside to out to help his wingers cause problems for Argentina in those weak wide areas.

Once again, they relied on Lionel Messi to create their goal, only this time he squared it to the otherwise awful Di Maria rather than finishing it himself.

It’s a sad way for Ottmar Hitzfeld to bow out of football, but this Swiss side hasn’t exactly been his greatest creation. It was 118 minutes of gruelling football before a frantic ending, although this is what will follow Argentina so long as they have the world’s best player worrying the opposition.