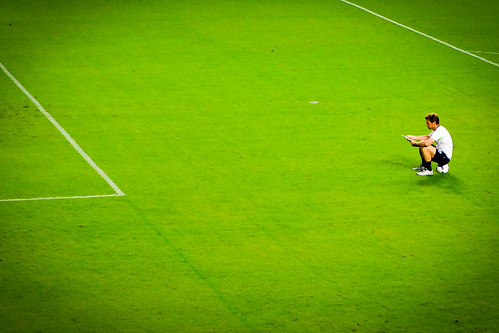 Four months after leaving the English capital, Andre Villas-Boas returned to London with his tail between his legs. He was initially heralded as “the new Mourinho”, with good reason. The Portuguese had worked closely together before Villas-Boas, like Jose Mourinho, chose to give management a try rather than continuing as an assistant. Like Mourinho, he honed his skills at one of Portugal’s more modest clubs before taking over at Porto, where he ended his first season as a treble winner, unbeaten in the league. His success caught the attention of Roman Abramovich, who offered him a chance at Chelsea, which is where the similarities end.

Issues of dressing room manipulation by senior players and Abramovich’s itchy trigger finger ignore that Villas-Boas generally wasn’t doing all that great a job with Chelsea, although he was not the only one to blame. A squad that had been constructed around Mourinho’s defensive game was not built to play Villas-Boas’ more energetic style. The ageing John Terry was too slow for the high line Villas-Boas required and his partner David Luiz too raw, unable to position himself correctly. Forced into dropping the defensive line deeper to stop getting caught out by balls in behind, the rest of the side had to fall back too, meaning Villas-Boas didn’t get to implement the high octane football he is good at. There is a case to be made that a top manager should perhaps be more pragmatic, but what’s the point in getting a specific manager if you aren’t going to support their project?

Abramovich learnt from his mistake, bringing in younger players needed to achieve his desire of entertaining, attacking football at Stamford Bridge, yet Villas-Boas, who arrived at Tottenham much more inconspicuously than he had at Chelsea, was again met with a squad not suited to the specifics of his tactics, albeit one more suited to the style. The result was a mixed season – the team often looked good, pressing high up the pitch, but were also frequently average, shoehorned into a 4-2-3-1/4-4-2 shape, and they eventually missed out on the Champions League qualification expected of them, limping to an excruciating 1-0 win over Sunderland on the final day as an equally painful Arsenal snuck past Newcastle.

Spurs have had a good record in the transfer market, maintaining the quality of the squad despite a high turnover of players, but their spending didn’t necessarily create as cohesive a squad as it could have done. While the likes of Hugo Lloris, Mousa Dembele and Jan Vertonghen were perfect additions, edging ahead of Liverpool for Gylfi Sigurdsson and Clint Dempsey were less so, particularly at the expense on missing out on Joao Moutinho from Villas-Boas’ former club. Although a shrewd businessman, Daniel Levy admitted his faults and the need for Spurs to move sooner in the transfer market, so Franco Baldini – the world-class managing director largely responsible for putting together Fabio Capello’s brilliant Roma side – was brought in as technical director with the responsibility of forming a cohesive squad tailored to the coach’s needs.

The defensive troubles that ruined Villas-Boas’ time at Chelsea aren’t repeated at Tottenham. Jan Vertonghen was one of the best signings of last season, mixing concrete defensive play with an ability to play the ball out from the back, while Younes Kaboul does the same to a lesser standard. Hard-working captain Michael Dawson stands out as weaker for the style but is still reasonably solid. Capable of playing a high line, getting caught out with balls over the top isn’t as frequent an issue as it was for Villas-Boas at Chelsea, but even if it was the addition of Hugo Lloris was enough to calm the nerves. For all his ability, Petr Cech is not a sweeper-keeper – he didn’t have the speed or mobility to rush out and get to the ball before a striker could latch onto it. The French captain, on the other hand, is perfect for this – one of Lloris’ greatest strengths is the way he times his sprints without fault to meet the ball ahead of any onrushing strikers.

Not having to sit deeper makes it much easier for the full-backs to join the attack. Within Villas-Boas’ system, it is the fullbacks primarily responsible for providing width, expected to run beyond the midfield and support the forwards. Kyle Walker’s forceful running is one of his main strengths and converted winger Danny Rose is also capable on the left, although Fabio Coentrao would have been a huge upgrade. The Portuguese made waves early on in his career as a winger, and it was only the success of Angel di Maria and Jorge Jesus’ ridiculously attacking ideas that saw him brought backwards into the defence at Benfica, which should say something about his attacking abilities, and why Tottenham wanted him involved in the Gareth Bale deal. 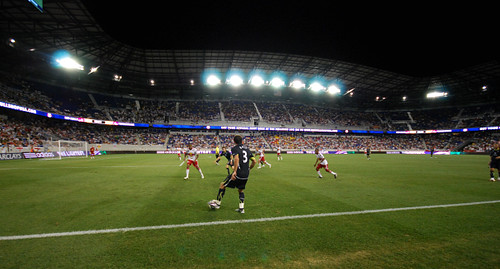 It’s the midfield where Tottenham’s progress in the transfer market will be most keenly felt however. While Sandro began his season well last year, he doesn’t really have the attacking quality suitable for playing in a double pivot. Inverting that midfield triangle allows him a preferred spot holding in front of the back four. At Porto, it was Fernando who took this role, staying very close to the defence and only ever playing short, simple balls out – a role that suits Sandro better than playing in a two. The alternative for this spot is Etienne Capoue, the physical new signing from Toulouse, equally as capable defensively but more adventurous with the ball – whether or not that’s a good thing is debatable.

Likewise, pushing Mousa Dembele ahead of the holding midfielder allows him better positioning for his impressive ability to dribble past players from a standing start, shuttling between defence and attack with neat passes. Next to him, new addition Paulinho is a perfect fit for the vigorous box-to-box role filled by Fernando Belluschi at Porto. Storming from deep, Belluschi would run diagonally to link up with Hulk, who played as a roaming forward on the right. If the muscular attacker came inside, dragging the full-back with him, Belluschi would attack the space, or if Hulk stayed wide, Belluschi would run in behind the full-back – supported by the right-back, Porto would easily overload the defending team’s left side. On the other side, the wide attacker is more of a typical winger, staying on the touchline before cutting inside, which explains the acquisition of the solid Nacer Chadli, although Lewis Holtby offers an alternate option for when Villas-Boas wants the left-sided player to get more involved in passing play.

The major problem area for Spurs last season was up front. Emmanuel Adebayor did nothing to stymie the poor run of form that has followed him since his promising start at Man City and while Jermain Defoe should be applauded for the hard work he’s put in to become a more well-rounded player, improving his movement and link-up play, he would have been more useful to Villas-Boas when he was a simple poacher. The striker in the Portuguese’s team is there to score goals, taking up positions in the box and always looking to dart in behind the opposition’s defensive line – a more static striker like Didier Drogba didn’t thrive in Villas-Boas’ system. The signing of Roberto Soldado provides a solution to this gap in the Tottenham squad: a proven finisher with sharp movement easily capable of leading the line on his own. Whether or not he is worth Â£26million is debatable, but if buying him means a better working side that gets into the Champions League, Tottenham will ultimately be better off financially than with a cheaper alternative.

Gareth Bale was the obvious choice to play in what is probably the most important role. He could have drove inside powerfully and rained shots down upon opposition goalkeepers even better than Hulk had, and would have had the purpose he has lacked since his move away from the left wing – which isn’t to say his attacking hasn’t flourished, but that he perhaps had more influence over a game for 90 minutes with a more specific function than when given complete freedom. Real Madrid’s determination to make him the most expensive player in the world means that wasn’t an option, leaving it to new boy Erik Lamela from Roma. The Argentinian lacks the physicality of Hulk or Bale yet has the speed, distinctive left foot and confidence running at players to make him a sure fit for the right-sided position.

That there is someone for every position doesn’t cease worries if for any reason that first eleven can’t play, as there’s several current personnel who simply don’t fit into the blueprint. As well as issues with the strikers touched upon before, Spurs were often found lacking when they were missing Aaron Lennon last season, but, for all his manic dribbling and stretching of play, he isn’t the direct threat on goal required in a 4-3-3 and certainly doesn’t fit into the right forward role from Villas-Boas’ Porto side. There could perhaps be some compromise with the more typical winger role being moved from left to right to accommodate him, although that limits the options for Paulinho to go about linking up with the forwards and doesn’t alleviate Lennon’s own limitations in a 4-3-3. Also, where exactly Sigurdsson fits into the midfield is unclear – he isn’t athletic enough to fit into Paulinho’s role, but is more attacking than Dembele’s, better suited to playing as an attacking midfielder in a 4-2-3-1.

Reacting to the exit of Gareth Bale isn’t just as simple as bringing in a couple of players to replace him either. His outstanding form meant that the team warped around him and too often relied on his ability to create a goal out of nothing. As top goalscorer and chief chance creator, Bale had an obvious importance to Spurs’ attack. Without him, however, the team averaged 24.2 attempts on goal to the 17.9 with him last season, showing they were trying a lot harder to force goals rather than creating better opportunities. Tottenham must adapt and be less single-minded if they are going to make progress.