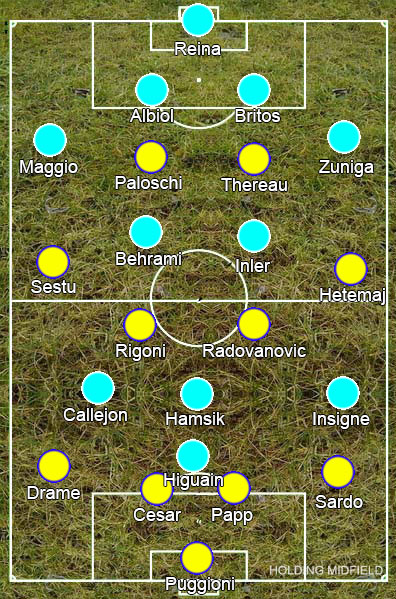 The Neapolitan Rafalution headed into its second week and stumbled a touch more than it had in their 3-0 win over Bologna, although Napoli’s supeior quality eventually shone against Giuseppe Sannino’s Chievo.

Rafa Benitez’s early blueprints seem to draw up something resembling what his Liverpool side should have been, only with Aurelio De Laurentiis’ financial backing meaning he isn’t having to make early compromises while he develops the squad. The transfer dealings appeared to be trying to reunite many of that team, although only Pepe Reina appeared on loan as attempts to bring in Martin Skrtel and Javier Mascherano were foiled, and giving Real Madrid’s substitutes a chance at first team football, acquiring Gonzalo Higuain, Raul Albiol and Jose Callejon. In comes his trademark 4-2-3-1 with patient passing and it seemed only right for Sannino to welcome him back from England by going for an organised 4-4-2 with players willing to show some hustle and bustle and direct balls forward.

On paper, the game was set up for the superior Napoli to cut through an undermanned and generally weaker Chievo midfield, but it was a bit more complex than that on the pitch. Chievo’s defensive plan was to retreat and allow Napoli to play around with the ball in front of them, pressing if they had the chance. This made it difficult for Napoli to play the ball out of the defence: the two holding players had Chievo’s strikers standing in front of them, blocking any balls from the centre-backs and the game frequently came down to Napoli passing it between their back four in search of a passing angle. There was a small variation where Valon Behrami would drop close to the right side of defence and pick up the ball, allowing Christian Maggio to bomb forward into a role he’s more comfortable with, but otherwise it was a lot of toing and froing between the back four, with Chievo occasionally snatching a half chance if one of them made a mistake. If Napoli’s passes did get through them, Chievo would rush to squeeze the space the forwards had, which more often than not meant giving away a foul that allowed them to halt Napoli’s attack and regroup further back.

Marek Hamsik’s opening goal, a perfectly placed shot from the edge of the area, seems like the type of goal out of nothing needed to break down stubborn, dogged teams like Chievo, but the space was engineered by one of the few extended passing moves that had worked for Napoli, showing that the tactics did sort of work, even if they were unsuccessful for the most part.

Nevertheless, the same could be said of Chievo. It was clear early on their main plan was to frustrate Napoli and hope for a draw, and so their only attacks were long balls for their forwards to chase and battle for. Napoli’s defence was fine with this and had the better of the aerial balls, but one lapsed moment and a brilliantly struck first time cross by Perparim Hetemaj allowed Alberto Paloschi to equalise. Napoli’s defence was generally comfortable with what Chievo through at them, but they kept making small mistakes, such as passes or headers too short back to Reina, that repeatedly almost let Chievo back into the game, culminating in their lacklustre defending of a corner that allowed Paloschi to pounce again and Chievo go in at half-time on even terms.

Rafa Benitez’s insistence that his team be good at everything means his teams adopt a mixed pressing style. This means that they will often sit deep in their own half, inviting their opponents onto them and soaking up long balls – something they got plenty of practice with in this game thanks to Chievo’s lack of imagination – but they will also press high up the pitch, the attack hassling the opposition’s defence as the defensive line is dragged up the pitch behind them to squeeze space, before sitting back again to conserve energy for another bout of pressing. Napoli’s second goal came from this: Higuain running onto a misplaced backwards Chievo pass they had been pressure into then slipping it across for Callejon, taking advantage of one of the few times Chievo didn’t have plenty of men back looking to break up play.

Heading out for the second half, Napoli were looking a lot more penetrative. Their Swiss double pivot, without a great deal of protection needed for the back four, were given more license to join the attack and Hamsik, who had been very good when he got the ball yet hadn’t seen enough of it, was dropping deeper, providing the extra passing option the defence needed to play the ball out, moulding into a 4-3-3 shape when needed to make Chievo’s defensive shape moot. They were also moving the ball much quicker, not giving Chievo the chance to break up their play. In the 64th minute, some haphazard defending saw Napoli take the lead again, but the ball had only reached the attack as Hamsik had moved back to interchange quick passes with the holders and it was Gokhan Inler, venturing into the penalty area, who played the ball across goal.

Minutes later Higuain sealed the win with a simple finish from a well-worked, quick attack, Lorenzo Insigne flicking an inch-perfect through ball between the Argentine and Christian Puggioni. The 22 year-old had looked one of the weaker players on the field for most of the game and, with little defensive work-rate, it’s difficult to see where he fits into Benitez’s plans. Both Insigne and Callejon had looked static for most of the first half, but while the latter began to impress more as he drifted inside to get more involved in build-up play, Insigne remained close to the left touchline, frequently isolating himself in passing moves. Benitez’s tactics don’t typically lend themselves to classical wingers like Insigne, and, as supremely talented as he is, it’s difficult to see how he will make consistent contributions over 90 minutes, although always likely to pop up with a moment of billiance.

Napoli appear to be shaping up well and, some small issues with getting stretched by wide players aside, their problems mainly came down to sharpness and a need to be drilled better – hardly worrying with only two games gone. Chievo aren’t exactly going to be one of Napoli’s biggest threats this year, so there wasn’t all that much to take from the match. It pretty much confirmed what Benitez already knew: he must have Hamsik at his best if Napoli are going to get anywhere, and, as both Pablo Aimar and Steven Gerrard played the best football of their careers under Benitez, the future looks bright for a player who was already one of the best in Serie A.