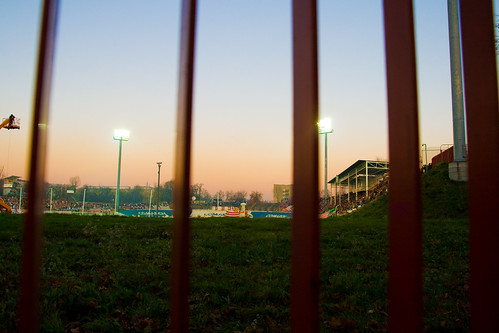 Polish taunting of ethnic Lithuanians at last monthâ€™s Europa League qualifying match between Lech Poznan and Zalgiris Vilnius in Poland was to most observers little more than a symptom of the increasingly fractious relations between the two countries, albeit on a more internationally conspicuous stage than the usual diplomatic discourtesies and thinly euphemised needling that now dogs their relationship at ministerial level. The unfurling of a 50-foot banner declaring â€œLithuanian cad, kneel before your Polish masterâ€ drew swift condemnation from foreign ministries on either side of the border but the lack of any punitive action from the state or footballing authorities reflects two communities made weary by years of ethnic tensions that have decayed a formerly strong fraternity. As the resolve to restore that brotherhood weakens amongst the leadership, a grassroots campaign to promote unity on and off the pitch is beginning to go viral.

That the meeting between Lech and Zalgiris sparked trouble came as no great surprise to anyone. The day before the first leg in Vilnius the county police headquarters issued a warning via the clubâ€™s website that any crowd trouble would be put down with swift and forceful retribution and hours before kick-off footage began circulating on YouTube of small armies of visiting supporters roaming the city centre. No violence was reported during or after the match but the sense of anticipation was intense, and scores had turned out primed and ready to capture any ethnically-fuelled disruption for the global cyber market.

Seven days later in Poznan tensions boiled over. Or rather a carefully planned and rigorously organised hate protest, if local commentators are to be believed. Leader of the political party Electoral Action of Poles in Lithuania Valdemar TomaÅ¡evski stated in the aftermath that the banner couldnâ€™t possibly have entered the stadium without specialist help, pointing the finger at the Lithuanian Special Services and in the process intimating at an act of state sponsored sabotage of the wilting bid for dÃ©tente. The foreign ministers of Lithuania and Poland kept up appearances and condemned the banner, with the latter tacking on a cursory apology, before both summarily closed the book on the incident with currently no internal investigations pending.

UEFA responded in the only way it knows how by splashing a â‚¬5000 fine in the ocean of Lechâ€™s coffers and closing off part of the Miejski Stadium for Poznanâ€™s next European tie, none of which does much to correct the governing bodyâ€™s image as being totally remote from any prospective solution to the problem of racism in European football. In issuing the punishment the disciplinary committee couldnâ€™t muster the interest to verbally censure what happened in Poznan and the affair has now moved, in any official sense, off the radar of the responsible authorities at both footballing and state level. Even from this distance the listlessness of the response has been palpable.

In response an online campaign organised by World Economic Forum founder Mykolas Majauskas has forced the authoritiesâ€™ insipid reactions off the news sites, and all the talk is of a new network of grassroots activists who have organised to promote commonality between the warring states. The Poland Loves Lithuania movement has landed a firm punch in the face of policy-making at state level and at the respective FAs, where politicking has allowed a dispute that began over the prohibition of the use of Polish surnames amongst immigrant populations living in Lithuania to foment ethnic tensions in public life. This reached a crescendo with the unfurling of the banner when Zalgiris visited Poznan, but the simply-branded crest of the PLL activists â€“ both countriesâ€™ flags placed side by side in a heart-shaped boarder â€“ is suddenly reclaiming the public space, both digitally and physically, in the name of brotherhood in a way that state and sport have failed to.

â€œAlthough we can’t change the opinions of others, we can choose how we respond to themâ€ reads a mission statement released by the movement. European football might be in a rather different state if UEFA subscribed to this doctrine of dealing with unsavoury behaviour. But instead the disciplinary process on the continent continues to be shackled by lacklustre and derisory gestures of recrimination, a nod to soft-handed coercion rather than a wilful effort to educate and reform. Michel Platini would do well to dispatch a delegate or two to see what can be learned from Lithuania and Poland in the on-going fight against prejudice. Just as long as they do their digging at the more enlightened end of the political ladder.