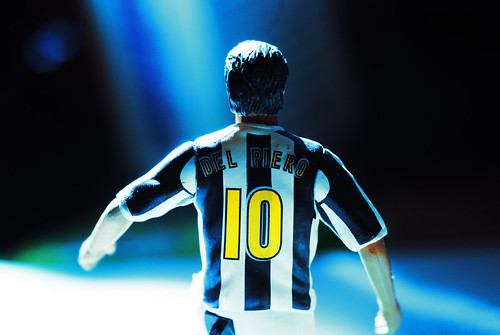 The recent troubles of Manchester United and Chelsea have led to a crisis in English football over the use of the word “crisis”. What exactly constitutes a crisis? Where between losing two games and liquidation are we allowed to start talking about crises? If I say “crisis” three times in a mirror will I go into crisis?

As with many questions, it may be best we turn to arguably the greatest footballing country in history – Italy – who seem stuck in a state of perpetual crisis. Never a stronghold for sanity, two of Serie A’s most storied clubs have undergone a turbulent decade: Juventus have gone from finishing top of the league to the embarrassment of demotion to Serie B thanks to Calciopoli and crawled their way back up again, while Lazio dropped from being top of the league to the steady mediocrity of mid-table with the talents of Roberto Mancini then Delio Rossi keeping them hovering safely, despite the very real threat of financial meltdown following president Sergio Cragnotti’s financial scandal. You would have thought 2001, where the clubs finished in the Champions League spots at second and third respectively, would have been a strong season for the pair, but both clubs were thought to be in crisis.

As the two sides lined up against each other on March 18th, Carlo Ancelotti was already under heavy pressure from Juve fans. Taking over from the hugely successful Marcello Lippi, with ties to rivals Milan, Roma and Parma and two of the worst runs in the Champions League Juventus had experienced for years, missing out on the scudetto by one point to Lazio wasn’t enough to make Ancelotti popular in Turin. Knocked out of the Champions League in the first group phase, Juve would have to beat Fabio Capello’s Roma to the scudetto if Ancelotti was going to save his job.

While Juve’s troubles were blamed on who was in their hotseat, Lazio were struggling based on who wasn’t in theirs. The previous season Lazio had achieved a rare double under the stewardship of Sven-Goran Eriksson, but this success caught the attentions of the English FA, looking to replace Kevin Keegan as manager of the national team. Eriksson left early on in the season and was replaced by Dino Zoff for his third spell at Lazio, and, in spite of continued heavy investment, they were struggling to build on their success with a new man in charge. 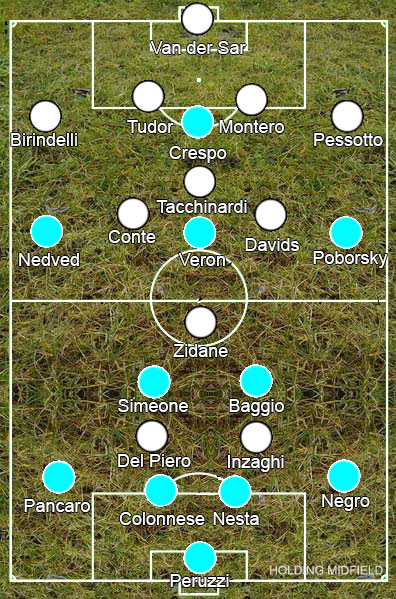 Juventus’ initial success under Lippi had been on a squad of complete players, capable of both defending and attacking, yet the acquisition of Zinedine Zidane had shaped them into being more pragmatic. Pippo Inzaghi was brought in to give Zidane a constant man in the box to provide for, replacing the more well-rounded Christian Vieri, while the midfielders around him were all battlers to cover up the Frenchman’s lack of defensive ability. Ancelotti continued this, picking a 4-3-1-2.

To counteract Ancelotti, Zoff went with a 4-2-3-1. The duo of Diego Simeone and Dino Baggio were expected to cancel out Zidane, the latter sticking close to him throughout, whereas Juan Sebastian Veron and Czech wingers Pavel Nedved and Karel Poborsky would supply record signing Hernan Crespo and pick up any runners from deep. The ideas were broadly the same: both sides would look to squeeze the opposing playmaker out of the game – it was a great example of why playmakers have been moved deeper rather than behind the strikers in recent years – while playing through their own and it resulted in a difficult first half.

It was Lazio who made the first breakthrough, deserving it far more than Juventus. While the ideas were broadly the same, the manner in which they went about it differed. Juve looked to construct their attacks almost entirely through the largely anonymous Zidane, marked out of the game by Baggio and having to retreat deep into his own half to see any of the ball, leaving Alessandro Del Piero running the attack by himself as Inzaghi awkwardly strayed outside of the penalty area to link play to no effect. With Del Piero isolated and Zidane kept quiet, it was up to the trio of defensive midfielders to help link the defence and attack. Although none of them were creative geniuses, it was a job Edgar Davids, current coach Antonio Conte and Alessio Tacchinardi were all capable of doing but it caused issues of its own, as the midfielders having to venture forward left gaps for Lazio to make use of on the counter.

This could be seen in the opening goal. Zidane came deep to get the ball and slotted it through for Davids, who lost the ball as Alessandro Nesta pressured him. Simeone picks up on the loose ball and, a few one-twos later, Poborsky, Veron, Crespo and Nedved find themselves between the lines running at the Juve defence. Poborsky squares it to Crespo, who crosses it for Nedved to tap in at the far post.

Veron wasn’t necessarily doing much better than Zidane, playing in a more advanced role to what he was suited to, but he was much more willing to do defensive work and it was this difference in mentality that gave Lazio the upper hand. As well as having extra attacking options in Nedved and Poborsky, they were all much more willing to track back than Juve’s attack, making it difficult for everyone ahead of Juve’s defence to play the ball out. Going a goal behind meant Juventus were having to get that midfield trio forward even more to create attacks, despite that forcing them into leaving gaps at the back.

The defensive work those forwards put in to gain control and score the opening goal was what allowed them freedom in the second half of the game. Veron was starting to get some space towards the end of the first half – laying it off for the double pivot to get Conte et al to close them down, getting it back and quickly turning to play a ball for Crespo darting behind the defence – yet it wasn’t until the first minute of the second half that this paid off. Lazio regained the ball deep in their half, played it out to Veron, who only had to nip the ball past one player to make space for a curling cross into Crespo.

Soon Davids was sent off with a second yellow. It was harsh but came from the systemic issues that plagued Juve: Tacchinardi was drawn up the pitch, the ball was played to Simeone, who, Zidane unwilling to put a foot in, was able to storm forward and Davids had to rush across from marking Veron to meet him, tripping him in the process (albeit also getting the ball). Straight after, Juventus got one back in one of the few moments Zidane escaped Baggio to set up Del Piero, but it was more of a reminder for Lazio they had to watch Zidane than a breakthrough for the Turin club.

Already looking dangerous, with a man advantage Lazio looked like scoring every time they counter-attacked. Nedved got his second not long after when a series of one-twos between Veron and Simeone opened up enough space for the former to pick out Nedved, who cut inside, played a one-two of his own with Crespo and finished high into the roof of the net. With eight minutes to go, a simple pass forward got three Lazio players running at Juve’s defence – Lucas Castroman setting up Crespo with one of his first touches after coming on as a substitute. Juventus had no reply and a frustrated David Trezeguet took to hitting Lazio players in the face and childishly kicking them into the air, earning himself a red card that no one seemed to care about.

Juventus weren’t this bad every week of course. They seemed to be making up serious ground on Roma towards the end of the season until they gave up a 2-0 lead against their title rivals thanks to a fumble from Edwin van der Sar, who was unceremoniously dumped at the end of the season. Ancelotti didn’t even last that long, sacked at half-time on the final day even though Juventus were still in with the possibility of winning the title. That’s what a crisis is: being in with a shout of winning the league with 45 minutes to go.