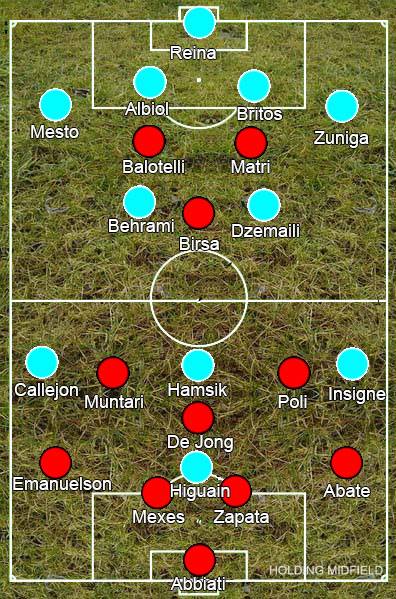 Rafa Benitez’s place as the Milanese bogeyman didn’t look under much threat as Napoli flew out of the blocks to unsettle Massimiliano Allegri’s men in their first proper domestic test of the season, fresh from a promising Champions League victory over Borussia Dortmund mid-week. The Neapolitans lined up in Benitez’s typical 4-2-3-1 while Milan were in a 4-3-1-2.

Napoli’s early goal came from a set-piece but the tone for the match was set far better by the two chances they squandered before that. Pressing high up the pitch, Napoli’s front four were making it extremely difficult for Milan’s defenders to play the ball out, not just blocking off balls into the midfield trio by standing between them but also closing down them down to force them into giving it away, gifting a succession of easy chances to Napoli.

That line of three was key for Napoli in attack too, as they looked to stretch Milan’s midfield. Marek Hamsik was moving constantly, making it impossible for only one man to look after him. To help Nigel De Jong, Andrea Poli and Sulley Muntari would narrow the midfield but then Lorenzo Insigne, supported well by Juan Zuniga, and Jose Callejon would force them into widening again. Ignazio Abate and Urby Emanuelson couldn’t help out as Callejon and Insigne were positioning themselves quite deeply and, if the full-backs came up the pitch to mark them, they would lay off the ball quickly and run into the space behind them, with Gonzalo Higuain’s willingness to move along the line not helping Milan’s defence either.

Milan’s defence and midfield were horrendously overworked yet that didn’t mean their attack didn’t have much to do. Although they were finding it difficult to get the ball out of their defence, when Milan did manage it they found themselves at an advantage running at Napoli’s defence, with Napoli’s front four unable to realistically track that far back to help out when pressing so high. These attacks mainly consisted of quick passes played between the attackers with the purpose of freeing up Mario Balotelli enough to get a shot away. While his talent makes his new-found seniority at Milan obvious – without him Milan wouldn’t have qualified for the Champions League last season – those questions about his temperament aren’t going to be going away anytime soon. For every show of his technical ability, there was a clear sign that he was growing frustrated – the free-kick for the opening goal coming from a needless trip from Balotelli on Callejon after he gave the ball away. His post-game red card was every bit as Balotelli as the good individual goal he scored minutes before.

The one thing from the game that wasn’t typical Balotelli was the penalty – the Italian’s 100% record was broken by Pepe Reina’s pattern spotting. A penalty doesn’t really have much to add to a tactical discussion, but it is a good sign for Napoli fans. One of the main criticisms of Reina’s overstated demise at Liverpool was that his reputation as an expert penalty-saver – gained from the seven out of nine he saved for Villarreal in 2004-05 and a somehow forgotten series of shoot-out heroics – was rubbish. That he is now back saving penalties, and pretty much everything else flung his way, suggests he is back on form and much of the credit should go to Xavi Valero, reunited with Reina again after their successful time together at Liverpool.

With a lead to protect, or at least without the reason to expend huge amounts of energy chasing a lead, Napoli seemed to ease off the pressing in the second half, and Higuain’s goal out of nothing only gave them a greater excuse. After the echoes of Benitez’s Liverpool destroying Real Madrid in the first half, the second half settling into something more dull – Napoli passing the ball around without an urgent need for an end product and Milan trying to break quickly when they won it back. There was little of significance in the second half and it shows how difficult a job Allegri has, forced into fashioning a team from a squad not nearly as glamorous as those he’s meant to be competing with.