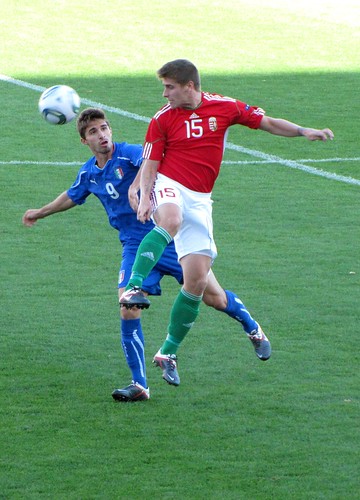 Football east of the Danube is becoming by reputation a cradle for something unsavoury in the European diplomatic stakes. The season, still in its infancy but maturing quickly in its propensity to shock, has brought a cloud over this part of the continent with ethnic tensions across four countries spilling onto the terraces and further contaminating some already poisonous relations. Lech Poznan were hit with a â‚¬5000 fine for racially aggravated chanting during their Europa League match with Zalgiris Vilnius in August whilst Budapest Honved were reprimanded for similar offences in Vojvodina. But whilst both episodes chimed with jingoistic thuggery â€“ the UEFA disciplinary panel donâ€™t get out of bed for anything less than the most brazen lashes of a chauvinistic tongueâ€“ there is a more insidious line that threads them together. In Poland and Hungary this summer racial chanting has been directed inwardly against long-established minority populations, fomenting civil discord and destabilising diplomacy along fragile international fault lines. Football grounds are becoming less recognisable as shared public spaces for celebrating unity and governing bodies are finding themselves embroiled in desperate public relations heists to save face. But in one of the affected countries the relationship between football and the state is beginning to show a more creative side to its nature.

Following a landslide victory for Viktor Orbanâ€™s conservative government in 2010 football investment policy in Hungary has begun to swing. The feeling amongst those for whom the game is still a priority â€“ and in Hungary those numbers have dwindled alarmingly since the early 90s – is that the upturn could not have come soon enough. Two decades of chronic underinvestment from corporate and state sources have left football in a country that once ruled the world with its revolutionary flair on its knees, beset by empty, crumbling stadia and a dearth of talent at youth and senior level. Now Orban is on a personal mission to raze the landscape and build again.

Work has already begun on a $57million project to restore the dilapidated Florian Albert Stadium in Budapest, home to Orbanâ€™s boyhood club Ferencvaros, and with similar architectural renovation set to take place at provincial Debrecen before a 65,000 seat national stadium rises out of the ground little time is being wasted in pursuit of a joint plan drawn up by the government and the MLSZ (the Hungarian football authority) to grow average domestic attendances from a meagre 3,000 to 10,000 by 2018. Poor facilities have been identified by the coalition as a tipping factor in the waning of support for the domestic game and these kinds of figures havenâ€™t been voiced around Hungarian football since the relative boom of the high-communist era saw 70,000 regularly pack in for the Budapest derby between Orbanâ€™s Ferencvaros and Ujpest.

It was the slow, grinding death of communism that ultimately contributed to the collapse of football as a cultural force in Hungary, with the public sector unable, and then the post-Soviet private sector unwilling, to invest in a domestic sport that was deemed even by pre-Murdoch standards to be lacking the potential to capture the popular imagination. The pre-capitalist iron curtain had created a predictably barren landscape for prospective sponsors and media partners who may have been pre-empting the early nineties football boom, but with a leadership election due in 2014 Orban and his party are investing heavily in the assumption that a renaissance on the pitch is what both the corporate big-wigs and the voters want from their government.

If Orban is to use the game as a weapon in his election arsenal then the reputation that dogs the atmosphere of Hungarian stadia on match days as cauldrons of racist dogma will need to be laundered. Last year the national team were forced to play a World Cup Qualifier against Romania in Budapest behind closed doors following a UEFA sanction for anti-Semitic abuse during a friendly against Israel, and this season already there has been controversy with fans on both sides arrested at the return fixture in Bucharest on racially aggravated charges. Parliamentary representatives of the Hungarian minority in Romania blame the home fans for provoking the visiting supporters, but anti-Romanian chanting and structural damage to the stadium committed by visiting Hungarians tells Orban all he needs to know about the challenges still ahead to sanitize football in his country and bring the electorate into his new stadia en masse.

For now the Prime Minister has at least isolated his target demographic and is making all the right noises to bring them over to his side: â€œThe Hungarian government has asked from the MLSZ that racist or uncultured, primitive behaviour is not given a place in our stadiaâ€ he said at last monthâ€™s visit of UEFA president Michel Platini. â€œThese venues should become popular with Hungarian families for matches to which everyone can feel comfortable taking their children.â€ Until now though those noises have been just that, and there was little talk at the meeting in Budapest of how the MLSZ plans to work with the government and with UEFA to change a football culture deeply touched by ethno-political tension, the likes of which sullied the matches with Romania.

Thereâ€™s also the small matter of pacifying a nationwide protest movement that demands to know how the government plans to off-set unheralded investment in sporting infrastructure with a worsening budget deficit and one the continentâ€™s heaviest debt burdens. On that question Orban is remaining stoically tight-lipped, discounting some blithe remarks about safeguarding the health of the nationâ€™s young people, and in the wake of the Brazilian Spring it is likely that the spotlight will first fall elsewhere in the wider debate on the role of sport in times of financial collapse, after which the government will be amply resourced to recycle from a library of sound-bites spinning from Sepp Blatterâ€™s PR cycle. A happy ending to Hungaryâ€™s 2014 qualifying campaign might also go a long way towards clipping the wings of discord before it takes flight.

A whole generation of players and fans have never known a strong Hungary team and as the global game writhes in fits of endless change the legend of Puskas and the Mighty Magyars has never felt less relevant than in the post-digital age. That could all change if Orban has called the mood of the nation right and can channel both public funds and energy into chasing the racists off his gleaming new terraces. Only then will a genuine revival be possible on the pitch that might remind the football world what itâ€™s been missing all these years.