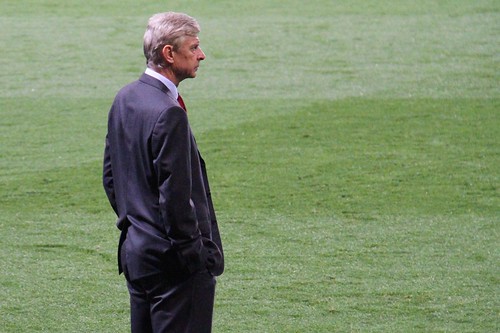 Amid the back and forth between Arsenal and Chelsea after their dull clash, there was more than a little mistruth flying around. Jose Mourinho is obviously a serial liar, yet the other camp were lacking a little self-awareness. There’s an admittance that the “boring boring Chelsea” chants are an adaptation of an earlier song about Arsenal, but its sentiment wasn’t made wholly redundant when George Graham left. Arsene Wenger brought style to his first Arsenal side but it was resilient and robust in a way the tippy-tappy years that followed weren’t, and it was at the end of this era that Wenger would be at his most pragmatic.

The Invincibles season is obviously his crowning achievement, yet Arsenal only made the quarter-finals of the Champions League that year. Wenger enjoyed plenty of success in England but even with those stronger sides he struggled to have much influence in Europe. The main exception was 2005-06 – a run to the final built on a sturdy defence. Arsenal failed to concede a goal in the knock-out rounds as they crept past Real Madrid, Juventus and Villarreal, setting up a tie against Frank Rijkaard’s Barcelona in Paris. 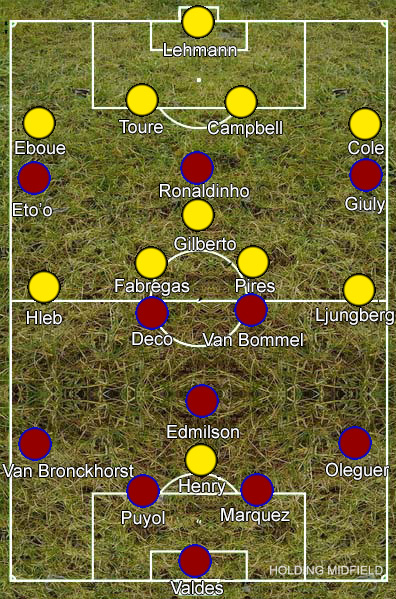 Given it wouldn’t be popularised until the next season by Luciano Spalletti’s Roma, it was somewhat odd to see both teams line up without a proper number nine. With Thierry Henry moving from inside to out, Arsenal had always played without a real striker, although the lack of a trequartista like Dennis Bergkamp behind him made it all the more obvious. Barcelona’s choice made less sense though: Samuel Eto’o would usually line up through the middle but for some reason he was moved out to the left with Ronaldinho moving central. With a young Lionel Messi unfit, perhaps the idea was to have the two wide players looking to run in behind Arsenal’s backline, or Rijkaard wanted Ronaldinho to link up more with Deco in the middle given Mark van Bommel and Edmilson weren’t the most creative midfielders, or to free Ronaldinho from any defensive responsibility.

It’s all guesswork but what we do know is it had a decidedly mixed result. Arsenal had the better of the early stages as Gilberto Silva ensuring Ronaldinho couldn’t get on the ball, and they played the ball forward with quick one-twos: Henry, Freddie Ljungberg and Ashley Cole down the left and Aleksandr Hleb coming off the wing to add to Gilberto Silva, Cesc Fabregas and Robert Pires in the middle. This ensured they were also able to keep plenty of players behind the ball as the remaining defenders and whichever midfielders weren’t involved in the one-twos held back to deny Barcelona on the counter.

Barcelona’s problems came mainly in midfield as Deco was needed in two places. He was best linking up with Ronaldinho but he was frequently needing to drop back alongside Edmilson to get the ball forward. With Arsenal sticking close to players in midfield, Barcelona were relying on long cross-field balls to their wingers to mount attacks, which worked surprisingly well due to the ridiculously good first touches of Eto’o and Ludovic Giuly. Still, they were relying on Eto’o and Giuly to beat their full-backs each time they got the ball and pull something off from a narrow angle – it’s testament to the technical quality of the pair that they often managed it but it wasn’t the most effective way of building play.

Nevertheless, although this strategy mostly hadn’t been working, it ended up causing the game-changing moment. Ronaldinho wriggled away from the defenders to slide a through ball to Eto’o, who was brought down by Jens Lehmann. Needing a goalkeeper as Lehmann became the first player sent off in a European Cup final, Pires’ last game for Arsenal came to an early end, replaced by Manuel Almunia.

With Arsenal now missing a man in midfield, Barcelona’s strategy worked much better. Deco now positioned himself on the right of Barca’s midfield three but was happy to sit deeper, looking to draw Fabregas up the field and create space for Ronaldinho to drop into. While Eto’o oddly was still stationed quite wide, Giuly was narrower and looked to constantly dart behind Arsenal, giving Ronaldinho a target for a through ball whenever he got it in space.

While Barcelona had gained the momentum, it was Arsenal who took the lead. They exposed a classic problem with man-marking from a free-kick, Gilberto getting between Sol Campbell and Oleguer to make sure the Englishman got to the cross first.

After going behind, Barcelona changed to their usual shape, with Ronaldinho wide left and Eto’o through the middle. Given their starting strategy was just starting to come good this was a bit of of an odd choice, especially as Ronaldinho’s tendency to come inside meant they would be narrowing their attack when Arsenal would now be at their most defensive, even though Eto’o and Giuly had done an excellent job providing width. It definitely made sense to have a more natural finisher like Eto’o hunting around a deep defence though, and weirdly Van Bommel of all people did a decent job of moving wide to stretch play.

With Arsenal leading and missing a man, the game simply became an exercise in attack versus defence. Arsenal would hit it direct to Henry but the late support meant even if he did win it he could rarely hold it up for long. Not in need of much defensive solidity any more, Edmilson was removed at half-time for Andres Iniesta to add another creator into the middle, Van Bommel was also soon replaced by Henrik Larsson and finally Juliano Belletti replaced Oleguer. Barcelona changed to a more fluid 4-2-3-1 – Deco and Iniesta spreading play deep, Eto’o back out on the left, Giuly right, Oleguer and (more effectively) Belletti overlapping when he tucked inside, and Ronaldinho playing off Larsson in the middle.

Barcelona were obviously dominating, but forced into pushing most of their team forward, they were becoming more susceptible to Henry’s pace on the counter. It was two deep banks of four and Henry on his own up front, with Mathieu Flamini replacing Fabregas to add more discipline to the midfield. As the game was petering out, Arsenal looked like they would go the distance despite playing for so long with ten men, managing more chances than Barcelona could against their massed defence.

Obviously, it didn’t last. After the game, Henry paid credit to Larsson for Barcelona’s win: “People always talk about Ronaldinho, Eto’o, Giuly and everything, but I didn’t see them today, I saw Henrik Larsson. He came on, he changed the game, that is what killed the game. Sometimes you talk about Ronaldinho and Eto’o and people like that; you need to talk about the proper footballer who made the difference, and that was Henrik Larsson tonight.”

He certainly had a point. While the other Barcelona players were more gifted, Larsson’s intelligent movement kept Arsenal’s defence occupied long enough for his teammates to make use of those gifts. Constantly hovering on the shoulder of the outside centre-back, he looked to split the centre-backs from each other or their full-back and open up gaps.

He would get a second assist minutes later, dashing wide across Campbell to cross for Belletti. Now in the lead, Barcelona just passed around Arsenal to run the clock down. Arsenal brought on Jose Antonio Reyes for Hleb but with a man disadvantage there was nothing they could really do to alter the game.

Arsenal may bemoan their rival’s pragmatism now, but there was a time when it almost got them club football’s biggest trophy.