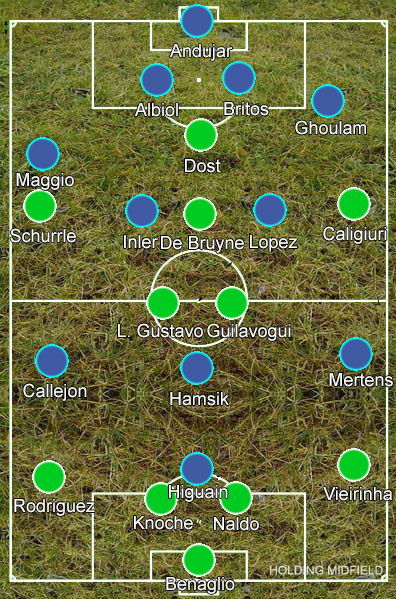 As the season draws to a close, both teams are running out of things to play for outside of the Europa League. While not technically secured yet, it is highly unlikely that Wolfsburg will cede their second place and catching up with Bayern Munich is all but impossible. They are still in the semi-finals of the DFB-Pokal, but a Europa League win would be a bigger step forward. Meanwhile Napoli are still in with a shot of Champions League qualification through Serie A but a lacklustre campaign makes it unlikely – a Europa League win looks the best way into Europe’s premier competition for the Italians.

Both teams set up in 4-2-3-1 but took different approaches. Rafa Benitez treated it as a classic European away, asking his opponents to break down two banks of four, while Wolfsburg sought to engage Napoli higher up the pitch. Daniel Caligiuri and Andre Schurrle got on top of Napoli’s full-backs as soon as they got the ball and, with Kevin De Bruyne and Bas Dost blocking balls into Napoli’s holding two, Wolfsburg’s own holding pair would push up behind them to trap Gokhan Inler and David Lopez. The idea was presumably to stop Napoli from playing out from the back, but since Wolfsburg’s defensive line didn’t push up behind their holding midfielders, perhaps worried about Gonzalo Higuain looking to run in behind, it only succeeded in leaving Marek Hamsik in acres of space.

Napoli’s attacking plan revolved around them circulating the ball in a small area of the pitch to draw in Wolfsburg before spreading it to whoever’s in space – with Hamsik given so much room, whoever got it had a big obvious target for moving the ball forward quickly so Napoli were able to break at speed.

The result was that Napoli found it very easy to play through Wolfsburg and had no reason to come out of their shell. With Wolfsburg best at counter-attacking, this posed a major problem for them. Out of Napoli’s six defensive players, only Christian Maggio would look to overlap, which meant Wolfsburg had no space to break into. Forced into a more patient approach, the Germans played neat triangles down the wing, with De Bruyne frequently moving out to the left touchline, but Napoli’s massed defence coped well with the rarely threatening stream of crosses.

One minor issue for Napoli was how easy it was to split their centre-backs. With the ball going down the wings, the back four frequently needed to shift across to cover but were instead left stretched across the width of the pitch.

Wolfsburg failed to make any real use of this due to their insistence on playing down the flanks. Had they come inside off the wings and looked to slide through balls between the pair, they might have been able to catch out Napoli but they instead hit crosses from the outside.

The game was an excellent example of the importance of compactness. Napoli looked to deny space for Wolfsburg to break into, so sat deep and were easily able to soak up their pressure. On the other hand, Wolfsburg wanted to deny Napoli time and space to pick out passes from the back so pushed higher upfield, but still wanted to deny Higuain space behind them though so their defensive line sat deeper, resulting in them being too stretched from front to back.

With four away goals, Rafa Benitez all but confirmed his place in another European semi-final on his birthday. With Wolfsburg probably favourites prior to the tie, Napoli now look forerunners to reclaim the trophy Diego Maradona first led them to in 1989, although there are still some tricky opposition left in the competition.