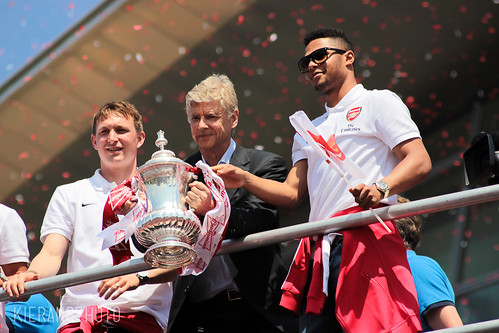 The romance of the cup, giant killing acts and anÂ air of unpredictability make it something of a no-go area.

However, having watched Arsenal end their nine-year wait for a major honour at Wembley last MayÂ it now looks exceedingly likely Arsene Wengerâ€™s team will successfully defend the FA Cup for a second time under the Frenchmanâ€™s watch.

Wenger did it in successive years in 2002 and 2003 and Arsenalâ€™s strong run since Christmas suggests they will be climbing the Wembley steps again on 30th May.

A quick scan on the Betfair sports app shows us that the Gunners are currently a shade of odds-on at a price of 4/5 to retain the FA Cup, with fellow Premier League side Liverpool close behind at a price of 13/8, although recent performances suggest the Gunners should have enough firepower to overcome not just the Reds, but the remaining three teams in the tournament regardless of who reaches the final.

A belief that they can do it is based onÂ Arsenalâ€™s recent strong consistency and cutting edge in front of goal.

With due respect to semi final opponents Reading; it is impossible to imagine they will prove a match for Arsenal on the wide expanses of Wembley.

Languishing in the bottom half of the Championship table, the Royals are ill-equipped to stem the Arsenal tide.

The other last four pairing pits Liverpool against Aston Villa.

The Reds needed two bites at the cherry to narrowly defeat Blackburn in the previous round while Villa have lost the early momentum of Tim Sherwoodâ€™s reign and are once more struggling. That said, it would be no surprise should they put the swordÂ to Liverpool in the semi final.

The most compelling evidence to suggest Arsenal will retain the FA Cup however, came at The Emirates recentlyÂ when the Gunners swept Liverpool aside 4-1.

Wenger is now seeing the best of Olivier Giroud up front while Alexis Sanchez retuned to form in that game and even the misfiring Mesut Ozil got in on the scoring act.

A three-goal blitz in eight minutes is a sobering memory for Liverpool and should the teams meet again at Wembley next month it will be very much worth recalling.

Arsenal have been the form team in the Premier League since the turn of the year and their strong finish looks set to leave them holding aloft the FA Cup for the second time in as many seasons.