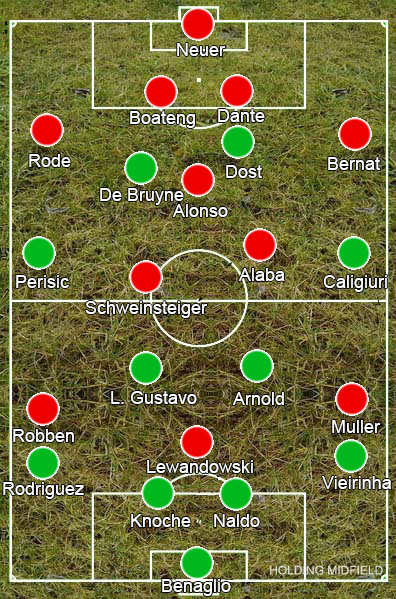 As the Bundesliga returns from its winter break, there’s a distinct air of futility circulating around German football. For the second year in a row, Bayern Munich have all but wrapped up their league win before Christmas. They have always used their clout to strangle competition but it’s been taken to such an extent under Pep Guardiola that people start to question what the point of it all is. A clash between first and second can’t be all that interesting if they are separated by eleven points, can it?

Unbeaten at home, this would be second-placed Wolfsburg’s greatest chance at playing catch-up with Bayern and adding some intrigue to the season. Needing more luck than getting free spins with our favourite slot game, Dieter Hecking set up his team in a 4-4-2 with Kevin de Bruyne playing high up alongside Bas Dost, while tinkerman Guardiola started with a 4-3-3.

As expected, Bayern were on the front foot from the start, but within three minutes they had gone behind. Bastian Schweinsteiger slipped on the edge of Wolfsburg’s penalty box and ten seconds later the ball was in Bayern’s net – an utterly clinical counter-attack reminiscent of Real Madrid’s dismantling of them last season.

Luiz Gustavo intercepted the pass intended for Schweinsteiger with five Bayern players ahead of the ball: all three attackers, full-back Juan Bernat and midfielder David Alaba, while his partner Schweinsteiger was in no better position to get back and even Sebastian Rode was positioning himself quite high. With so many players committed forward, the Brazilian immediately seized the opportunity, knocking it first time to Maximilian Arnold who, baiting Xabi Alonso into coming forward, moved the ball quickly for Daniel Caliguiri to run onto.

All four of Wolfsburg’s attackers had sprung forward – Caliguiri outpacing Bernat, while Ivan Perisic was free on the opposite side with Rode moving infield to cover De Bruyne after Alonso’s mistake. With Bernat not catching up, Dante had to move left to cover for him, leaving Jerome Boateng alone against Dost and De Bruyne advancing. Caliguiri played a perfect ball behind for De Bruyne to easily square for Dost. 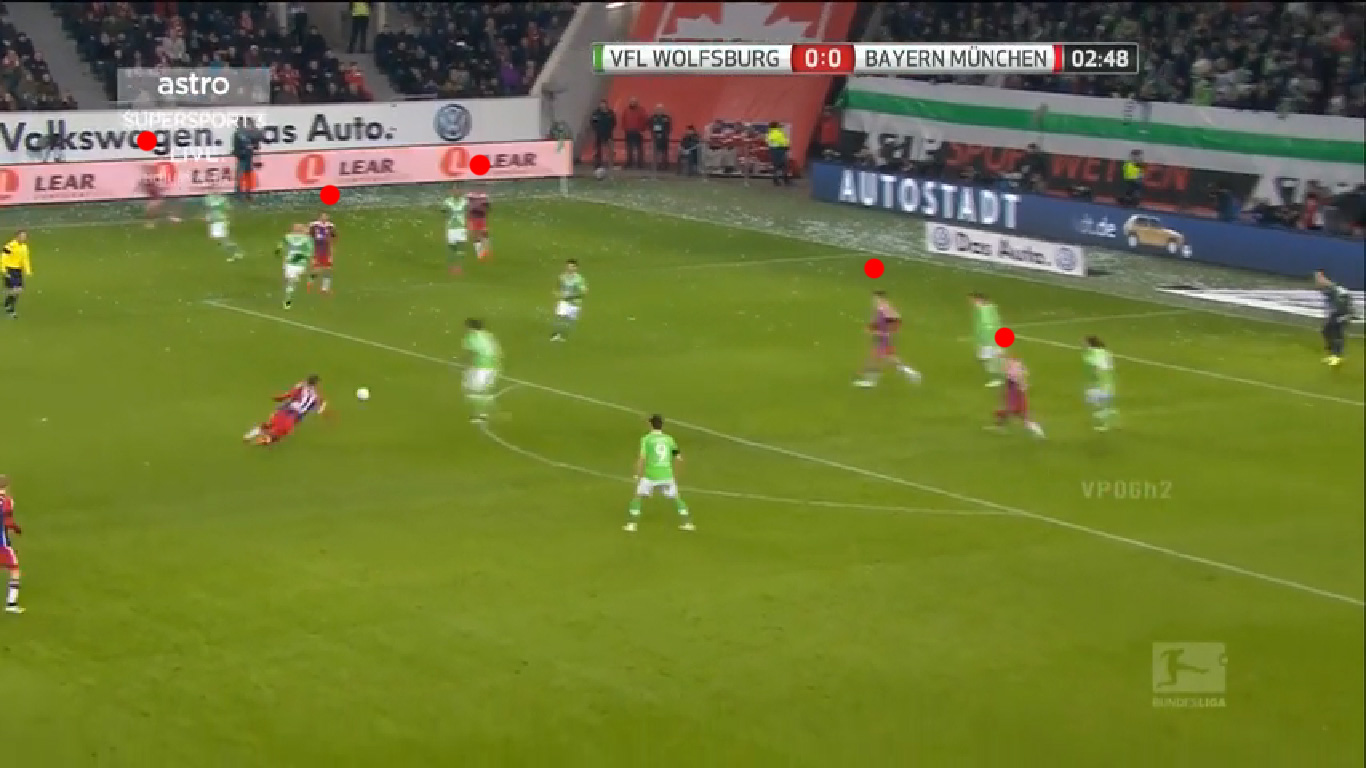 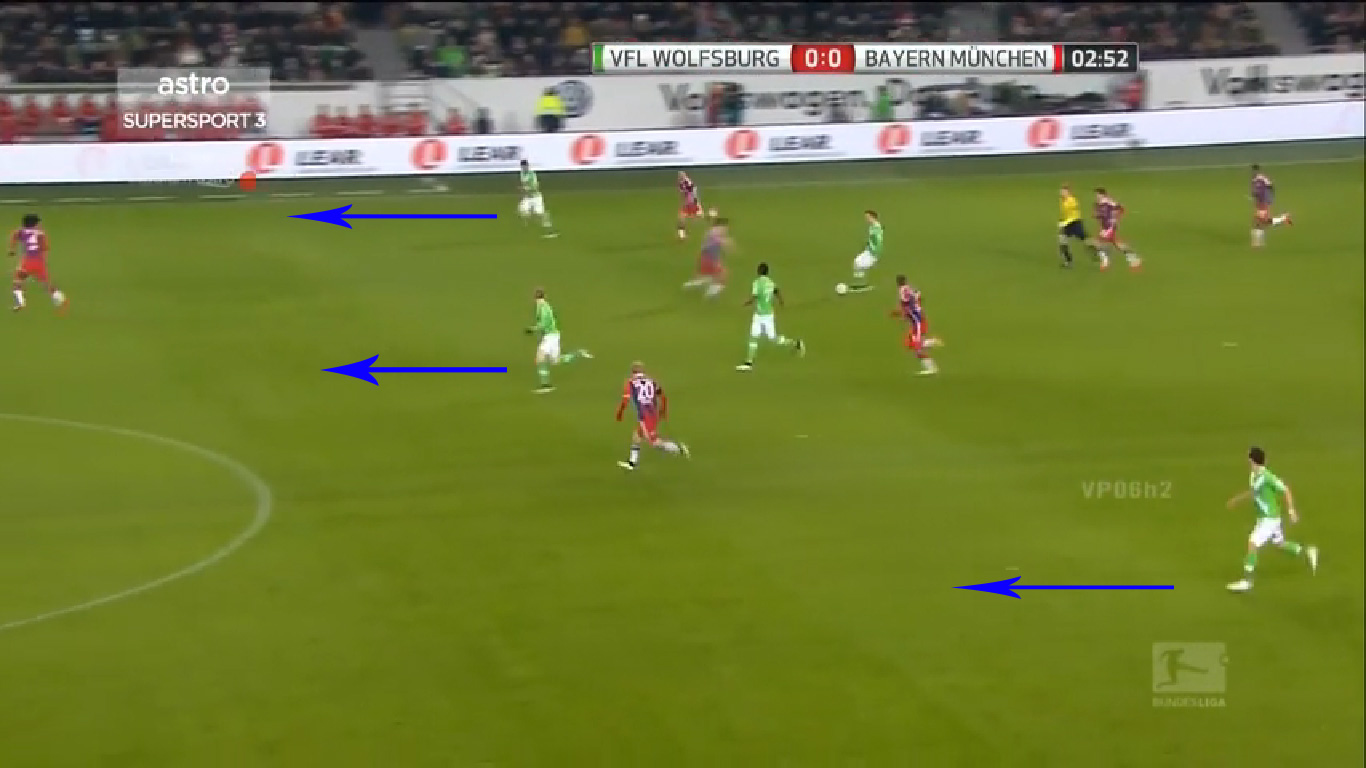 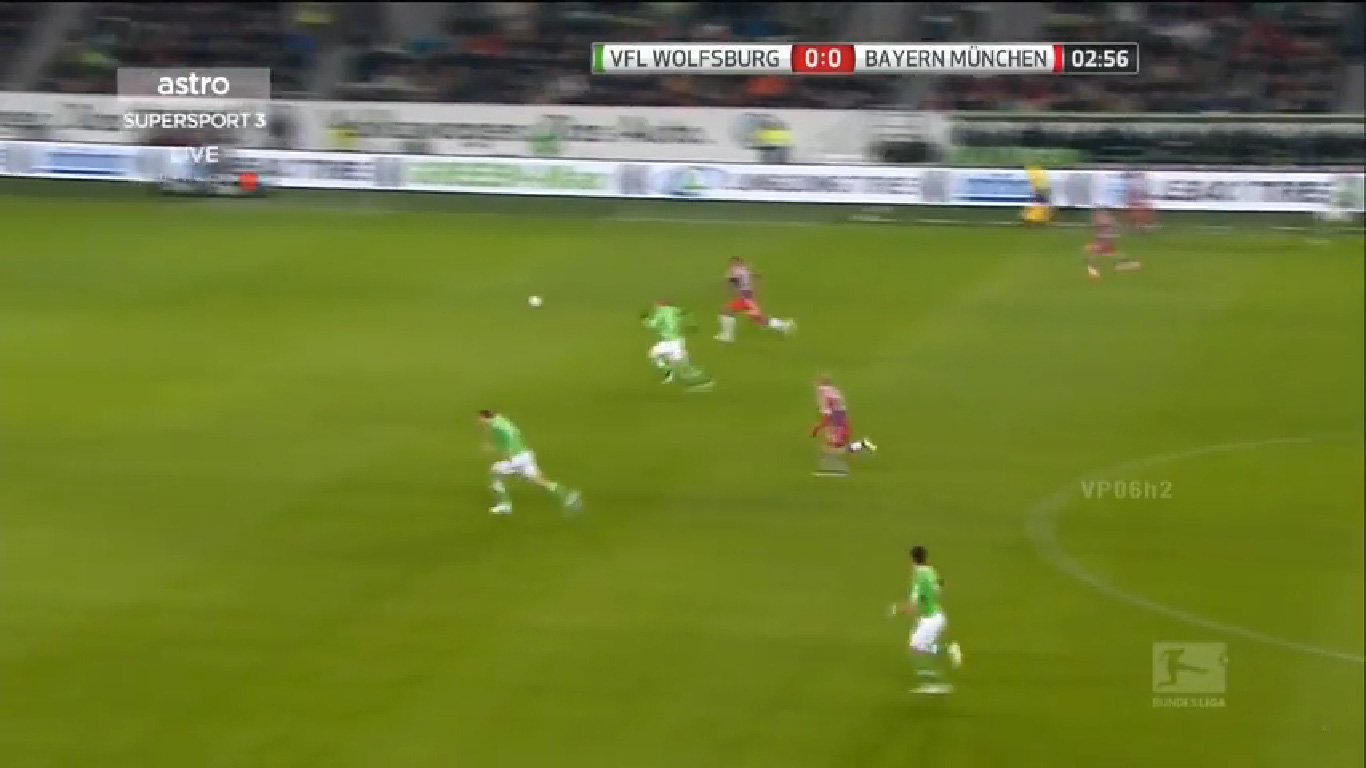 A brave willingness to push players forward creates the overloads that frequently make Bayern so successful but this is the other side of it, when those extra men don’t ensure they keep the ball. This is a notable difference between Guardiola’s Barcelona and Bayern – when in transition Barca were much better at stopping play, keen to slyly trip or pull a shirt. There’s arguably a difference in culture here too though – slow and not a strong tackler, Alonso relies heavily on tactical fouls defensively and the way he took out Arnold may have stopped Wolfsburg’s counter in its infancy in Spain. However, the greater acceptance of physical play in the Bundesliga compared to the strictness of La Liga’s referees mean it may actually be harder for them to give away the fouls Bayern need to use to break up play – what would typically be a defensive positive becomes a negative in Guardiola’s style.

That error was only the beginning of Alonso’s woes though. Although one of the world’s best playmakers when given space, it’s quite easy to squeeze Alonso out of a game through pressing due to his lack of mobility, as frequently found out in Clasicos during his time with Real Madrid. Wolfsburg’s response was to have one of their strikers shadow him, while Arnold and Luiz Gustavo stuck tight to Alaba and Schweinsteiger, ensuring Bayern couldn’t play the ball into midfield. With the midfield two following the Bayern pair high up the pitch, Robert Lewandowski had space to drop back into, with one of Wolfsburg’s centre-backs following him, but neither Thomas Muller or Arjen Robben looked to take advantage of that vacated space in the middle, instead staying wide.

It’s common that Guardiola’s teams face this kind of crude man-marking (it’s still really zonal marking but it’s distinctly more man-orientated than proper zonal marking) and the usual answer is to make use of the only free men: their centre-backs. Both Dante and Boateng had lots of space to use, so they had two options on how to do so. The riskier is to free up those man-marked midfielders by dribbling forward, forcing the opposition into having to confront them or letting them waltz deep into their half. The other option is to use that space to pick out accurate passes at their leisure. They opted for the latter – Boateng launching long diagonal passes towards Muller that never really lead anywhere.

It got worse for the increasingly tetchy Bayern as Dost got a second from a cheap free-kick on the stroke of half-time.

For the second half, Alaba was moved back into the defensive line, switching to a 3-4-2-1 with Robben and Muller both moving inside behind Lewandowski. It’s a slight tweak but it altered several things. An extra man in the back line allowed greater passing from the back yet also let the full-backs push up to provide width, meaning Robben and Muller could make use of the space in the centre created by Alonso and Schweinsteiger staying deep to pull Luiz Gustavo and Arnold up the pitch. What it didn’t provide was a way to stop Arnold picking out De Bruyne for the third minutes later, played onside by Bayern’s high line moving past the half-way line as he remained in Wolfsburg’s half.

One of those long diagonals paid off minutes later as Lewandowski laid the ball off for Bernat. Given plenty of space on the left due to Vieirinha following Muller into the centre, the Spaniard still relied on a poor error by Naldo to give him a second chance after fluffing his first finish, although it a decent goal nonetheless.

Bayern had a much better grip on the game after switching their players around to ruin Wolfsburg’s marking, but the pressing still constantly disrupted their passing. Having to push more and more men forward in search of goals meant that the clever runs and neat forward passing of the first half from Wolfsburg was replaced by long punts forward which were just as effective – De Bruyne getting another by evading Dante.

There’s no doubt the need to get back to full match fitness after the winter break played its part in this defeat – the sluggishness every time a ball went in behind is not usual to such an intense side – and that it is ultimately unlikely to make any difference in the Bundesliga title race, but there was more than a slight feeling of deja vu. Guardiola had worked hard to eradicate that weakness on the counter Real Madrid had so unceremoniously exposed, yet here it is again. The more Bayern strangle the life out of their German competition, the less we know about them.

It’s revealing that Bayern conceded as many goals in this game as they did in the entirety of the first half of the season. Is that because Bayern’s defence is so good or because the rest of the league is so incapable of exposing those deficiencies? This is a team that’s run up a near insurmountable lead despite missing several of their key players. How are they meant to know if they can compete at the highest level when no one else has a chance domestically?