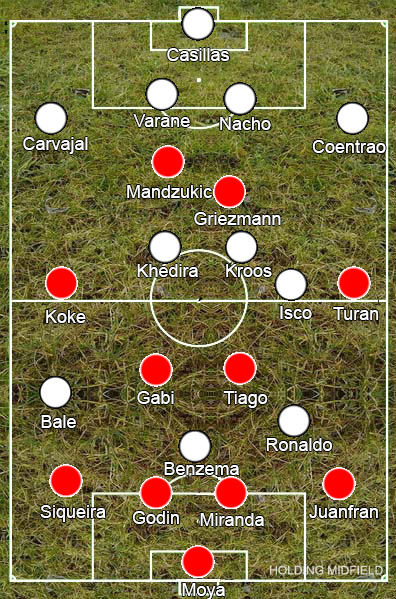 After the shock and horror of losing a game, Real Madrid came back strong with another five wins on the bounce to put some distance between them and the chasing pack, but they had reason to be more than a little edgy going into the match against their city rivals. Atletico won the Supercopa, the league game at the Bernabeu and just a few weeks ago knocked Real out of the Copa del Rey, so Diego Simeone’s role as boogeyman to Spain’s powerhouses shows no signs of abating. If you had a free bet with ladbrokes, the better bet would have been on the home side – unthinkable just two years ago.

For a country whose country’s reputation is built on passing football today, the set-up was strangely English. Atletico started in their typical direct 4-4-2 shape and Real went with their usual 4-4-2/4-3-3 hybrid, although missing several first-teamers, but were unusually direct, with the defenders hitting long balls forward rather than passing it forward.

Despite the brilliant job he’s done balancing out a very top-heavy squad, Carlo Ancelotti’s been criticised for failing to adapt his gameplan to the opposition. He seemed to take these criticisms on board for the derby, and the alternative clearly didn’t work.

Real have been successful defensively when they have pressed high up the pitch, making up for many of their players lack of defensive nous with hard running. However, against a team that thrives on having space to counter into and likes to move the ball forward as quickly as possible, forcing them into hurrying up may not be the best of ideas. Instead, they sat deep and kept their full-backs back defending, denying Atletico that space to run into. It still didn’t work.

The problem with sitting back and defending is that you need players who can actually defend to do it. Real had two playmakers – Isco and Toni Kroos – and a box-to-box midfielder who’s been relegated to back-up all season – Sami Khedira – in midfield, a second choice defensive pairing of Raphael Varane and Nacho and a goalkeeper that’s a ghost of his former self in Iker Casillas. The first goal comes from Tiago being completely free in that area in front of the defence where the holding midfielders should be and the second from Guillherme Siqueira evading Dani Carvajal and Saul Niguez, an early substitute for the injured Koke, losing his marker Kroos to finish. Real simply aren’t good enough defensively or aerially to sit back and let Atletico have the ball – even if Atleti don’t win the duel, they win the second ball, and they win it deep in the opposition half.

Rewinding further back reveals another reason for the first half goals though: Nacho trying to loft balls forward that fell straight to Atletico. Simeone’s men are notoriously good at pressing, but Real weren’t be pressured into hitting it long – it was clearly their gameplan. The defenders ignored the playmakers in midfield in favour of hitting long balls from deep towards Cristiano Ronaldo, Gareth Bale and Karim Benzema. That didn’t work either: Atletico’s defenders are better in the air than them and even if they did win the ball, Tiago was on their toes to pick up the second ball, gifting it straight back to Atleti. Real couldn’t defend and their attack had no support or supply.

With a few minutes of the first half left, Ancelotti reverted to Real’s normal gameplan, pushing up to harass Atletico in their own half. Jese Rodriguez was brought on for Khedira at half-time, with Real in a more concrete 4-4-2 shape. The game now settled into a pattern we are more used to seeing from these games: Atleti sit deep and break quickly, while Real pass the ball around, pushing their full-backs forward.

The game was now much more even, but Real still weren’t able to break down Atleti. Also while they were no longer actively gifting Atleti the ball, Antoine Griezmann was finding it easy to get space running off the back of the midfielders and, with Real’s full-backs pushing forward to support the attack, Saul and Arda Turan had plenty of room out wide.

Atletico got a third when Turan dodged a weak Isco tackle, chipped it to the far post for Saul to win in the air and Griezmann scrambled it across the line at the other post. With that, Real simply looked for damage limitation. Isco was immediately replaced by a more natural holding player in Asier Illarramendi and Javier Hernandez was brought on to give Benzema a rest. As the game was about to reach full-time, Tiago intercepted a pass, sent it straight down the line for substitute Fernando Torres and the resulting cross was headed home by Mario Mandzukic.

Real tried to play Atletico at their own game and completely failed, then resorted to their normal strategy and failed again. All big clashes in Spain come with the caveat that the world class players will nearly always be enough to simply overpower the smaller teams in the rest of the games and, with a decent lead in the league, Real won’t be too troubled, but it’s ultimately another Madrid clash that’s come out in favour of their noisy neighbours.