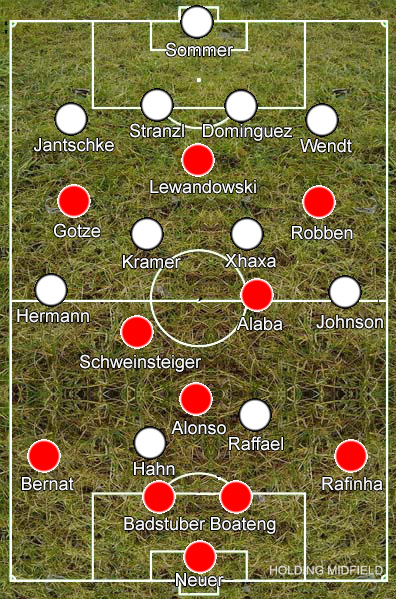 It’s hardly the Franz Beckenbauer and Gunter Netzer-led rivalry of old, but the clash between two of the league’s top three was definitely something to get excited about, even if they were separated by 20 points. While mostly lacking the playing quality of other top leagues, the Bundesliga has such an interesting variety of gameplans that half the league has the potential to really make things difficult for Bayern on any given matchday. They obviously don’t generally – the table speaks for itself – but nevertheless the potential is there and it’s the hope that keeps us going.

Pep Guardiola opted for a 4-3-3 formation while Lucien Favre went for his usual 4-4-2, somewhat surprisingly choosing to leave Max Kruse on the bench presumably due to his relatively poor form since the winter break.

The opening half hour was mostly uneventful. Borussia Monchengladbach sat deep and narrow, but didn’t completely cede to the Bavarians, pressing whenever they had the opportunity. There was some slight variation from the norm in how they defended: typically in this kind of set-up the strikers shadow the centre midfielders to stop the ball being played into them – which is what they did here when the ball was central – but when it went wide one of Andre Hahn or Raffael would move across to close down the full-back while the other would push up against the centre back. This would obviously leave a midfielder free for a pass from the full-back so one of Christoph Kramer or Granit Xhaka would step up to cover. While the winger would tuck in a bit to cover for the centre midfielder pushing up, there was still some gaps left here to be exploited, but the full-back wouldn’t be able to find any player who wandered into them from this wide position. The only passing options left were either backwards or a long crossfield ball.

Although Mochengladbach’s defence was impressive, they weren’t exactly facing as tough a test as they should have been. Guardiola’s style relies on the idea of circulating the ball quick enough so the opponent can’t alter their position in time, but Bayern were far too slow here. Their main attacks came from crosses that just looked to play the percentages rather than probe, yet those crossfield balls could have been much more useful earlier in their build-up: the need to narrow the midfield when Kramer or Xhaka stepped out meant the wide player on the opposite side had plenty of space whenever the full-back had the ball, but they were always so slow to switch play that it could never be exploited.

Pep Guardiola’s explicitly outlined this before, but it wasn’t on display against Monchengladbach: “In all team sports, the secret is to overload one side of the pitch so that the opponent must tilt its own defence to cope. You overload on one side and draw them in so that they leave the other side weak. And when we’ve done all that, we attack and score from the other side.”

This lack of penetration also had its roots in the midfield. Bastian Schweinsteiger is no longer the winger of his youth and Xabi Alonso has never been mobile enough to be dynamic so they both functioned in the same role here, dropping deep and stepping on one another’s toes. With one of the midfielders effectively redundant, it wasn’t too surprising Bayern struggled to break down Monchengladbach’s compact defence. Alonso was eventually replaced by the more penetrative Sebastian Rode in the second half, leaving Schweinsteiger alone as the passing midfielder, but it proved to be too late. 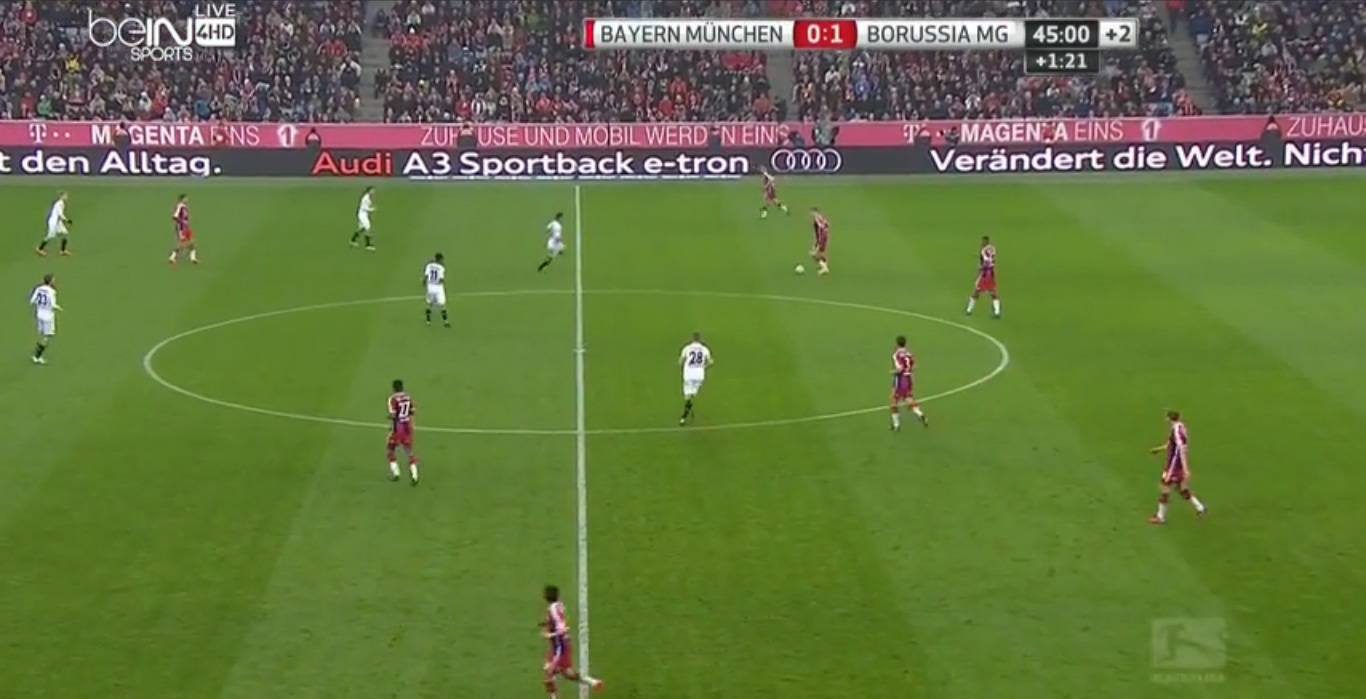 Nevertheless, this game isn’t particularly important. Unless they undergo a spectacular collapse they are certainties to win the league and, although poor, they still utterly dominated this match. Monchengladbach deserve credit for their defensive performance but they were an attacking non-entity, moving the ball down the wings a few times with one-touch triangles but mostly getting pinned back by Bayern’s pressing. They had just four shots and Manuel Neuer dealt uncharacteristically badly with three of them. This wasn’t in any way a convincing win like Wolfsburg’s – you could replay this game ten times and, while Bayern still might not score, Monchengladbach certainly wouldn’t either.