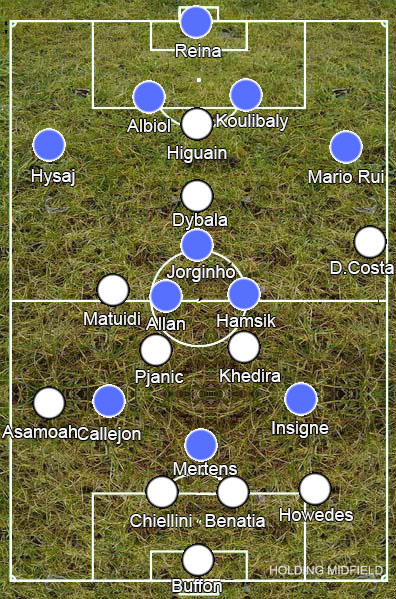 Napoli started the season much better, making it look as if Juventus’ chokehold on the scudetto would finally be broken, but slowly and surely Juventus’ deeper squad saw them claw back the Southern club’s lead and give themselves a buffer going into this huge match.

With the support of their city ringing in their ears as they left for Turin, Napoli didn’t alter from the 4-3-3 that has worked so well this season, while Juventus opted for a 4-4-1-1 with Paulo Dybala playing off ex-Napoli man Gonzalo Higuain.

When in possession, Blaise Matuidi would tuck in off the left and Kwadwo Asamoah would push high up the pitch, keeping the width as Douglas Costa did on the right. As Benedikt Howedes stayed back on the right side, Juventus formed a back three that actually made it easier for Napoli’s press.

The Neapolitans defend zonally, the entire team moving as a block according to where their teammates and the ball are, so if the ball goes back ten metres, Napoli move up ten. However as Juve formed a back three, it meant each of Napoli’s front three had a clear man to close down. Napoli defend in a very compact 4-5-1 shape, so Dries Mertens would start the press, closing down whichever centre-back has the ball, and one of his teammates would push up to shut down the other one – if Mertens went to the right-sided centre-back it was Jose Callejon pushing up and if he went to the left-sided centre-back it was usually Marek Hamsik.

Therefore if the ball was played out to Juventus’ right side, Lorenzo Insigne would press Howedes (Stephan Lichtsteiner once Giorgio Chiellini went off injured after ten minutes), Mertens would press Mehdi Benatia (later Howedes) and Callejon would press Chiellini (later Benatia).

Whether it was them simply picking the ball up here a lot because of Napoli typically playing down the left or them purposely trying to bait Napoli’s press by playing out down the right, Juventus seemed to be getting Callejon to push up far more than Hamsik. It would make sense that they wanted to draw him up the pitch to make more space for Asamoah, but in practice this didn’t work because of how compact Napoli are. Callejon would be drawn up towards the left-sided centre-back, ostensibly leaving Asamoah free, however Elseid Hysaj would push very high up the pitch to close him down and Napoli’s midfielders would shift across to trap him.

The idea appeared to be to get Asamoah free on the left then overload Napoli’s backline – Hysaj pushing up left the three remaining defenders against Costa, Higuain, Dybala and Matuidi, who would make diagonal movements off the back of the midfield whenever Asamoah picked up the ball – however this didn’t work as Asamoah never had the space or time on the ball to play it forward to them.

Then, when Napoli reclaimed the ball, it would immediately be three against three, with Callejon, Mertens and Insigne all ahead of the ball running at Juve’s backline. Juve really struggled to deal with Napoli’s pressing and frequently either gave it away on the edge of their area or just gifted it straight back to Napoli by booting it long.

Juve attempted pressing of their own, but their man-orientated press was much less effective than Napoli’s zonal. Higuain and Dybala would push up onto the centre-backs and either Miralem Pjanic or Sami Khedira would push up onto Jorginho. They aimed to force Pepe Reina into playing it wide, where Juve would then try to overload Napoli, trapping them on the wing to win the ball back. Napoli move the ball so quickly though that this rarely worked – they would send it wide then move the ball onto the next man before Juve could even adjust, with Hamsik in particular popping up in free spaces to receive the ball, or use Reina’s kicking to just hit it long and have Mertens chest it down for a teammate behind him.

While their pressing was unsuccessful, Juve’s deeper defending was superb. Once the press was beaten, they would drop back into a deep, narrow 4-4-1-1 shape, ceding the wings to flood the centre and squeeze out any space the attackers had to work in. With both Insigne and Callejon staying narrow when the ball was on the opposite flank, Juve’s back four was never stretched and they all kept on their toes to withstand the front three’s constant runs in behind.

The Napoli full-backs had plenty of space to pick out crosses but with 5ft 7 Mertens leading the line, they didn’t have much to aim for and Juve’s defenders could head away most crosses with ease. Napoli are so good at their Plan A that they still created chances, but they also played into Juve’s hands – top of the table, they were in a position to sit back, limit space and play for a draw.

For the second half, Massimiliano Allegri removed Dybala for Juan Cuadrado, switching to a 4-5-1, shoring up the centre as Matuidi moved inside and Cuadrado and Costa offered counter-attacking threat on the wings.

Of course Juventus didn’t manage to see the game out in the end, with Kalidou Koulibaly heading home a corner in the last minute. It’s perhaps notable that Napoli’s winner came from a set-piece, as it’s one of the only times they could get their defenders forward to offer an aerial threat. Napoli’s attackers are all small technical players and it makes for fantastic football to watch, but it also limited them to a style that never forced Juventus into changing their game.

With this win, Napoli are just one point behind Juve, who still have to play Internazionale and Roma in their remaining four games and have the Coppa Italia final with AC Milan to tangle with. Juventus have the quality to still see it out but it’s making for a brilliant fight for the title when most other major leagues are already sewn up.