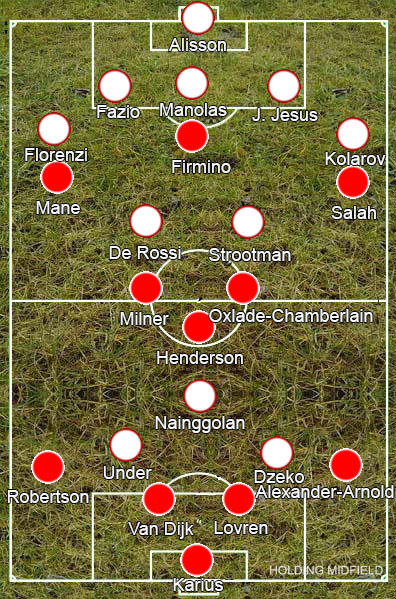 Neither team really looked favourites to be here going into the quarter-finals, but here they are. Liverpool thrashed Manchester City and held strong in the second leg, while Roma staged an incredible comeback against Barcelona to fight their way through to the semis.

The home side lined up in their usual 4-3-3, keeping the same eleven that started the first leg against City, and Roma continued with their back three, which has only previously been used in a draw to Lazio and the win over Barcelona, although here Cengiz Under joined Edin Dzeko up front in a 3-4-1-2.

Eusebio Di Francesco attempted two things defensively that have rarely worked for Liverpool’s opponents: a back three and a high line. Keeping just three men back against Liverpool’s front three doesn’t give them enough cover, and if Roma could hold off Liverpool for long enough for the wing-backs to return to make a back five, then there would be too much space in midfield. With both of Liverpool’s full-backs keeping the width, James Milner either pulling out to the touchline or joining the attack, Gini Wijnaldum often joining the frontline once he came on, Roberto Firmino often dropping off into midfield and Sadio Mane moving inside, Daniele De Rossi and Kevin Strootman simply had too much to keep track of.

If the ball went out to Andy Robertson for example, De Rossi was expected to move out to stop him coming inside, but then Firmino would drop off into the space he had just left, who could then lay it off to Milner before De Rossi could chase back across. Him and Strootman essentially had to keep track of where six men were at any one time, and it left them chasing shadows.

The problem with the high line is fairly obvious: Liverpool’s front three are so quick that they are going to be able to out-run most centre-backs to any ball hit into the space behind the backline. It was even worse here though as there was no pressure from Roma’s attack to stop Liverpool from picking out long balls over the top. Under and Dzeko would split and stand close to the centre-backs on either side, while Radja Nainggolan would stay around Jordan Henderson, however they would only ever apply mild pressure to the man on the ball, which made it easy for Liverpool to play out.

Even if they had been more intense, the full-backs were essentially left free as Aleksandar Kolarov and Alessandro Florenzi would run back to form a back five as soon as Roma lost the ball, and later in the half Milner would drop back next to Virgil van Dijk to form a makeshift back three and make playing the ball out easier. By playing a high line, Roma were giving Liverpool a huge target to hit aim at with long passes over the top, and then giving their defenders all the time and space necessary to pick them out.

Even if the Roma backline managed to cut out those long balls, Liverpool found it easy to win the second ball against just De Rossi and Strootman, putting them immediately back under pressure.

Roma’s attacking was also ineffective. Their gameplan appeared to be trying to stretch Liverpool’s backline and cross. The wing-backs, although pushing into Liverpool’s half, generally weren’t getting high and wide, while the two forwards appeared to be trying to split the centre-backs, positioning themselves between the full-backs and centre-backs on their side, hoping to forge a gap between Dejan Lovren and Van Dijk for a midfielder to attack.

It generally didn’t work though as rather than the Liverpool full-backs pushing forward to engage Kolarov and Florenzi, it was usually the outside midfielders, meaning Liverpool could keep all the back four back against Roma’s attacking three. So when Kolarov would get the ball, Dzeko or Nainggolan would make a diagonal run behind Trent Alexander-Arnold, but as it was Alex Oxlade-Chamberlain closing him down rather than Alexander-Arnold getting dragged up the pitch, there was no real space for them to attack and Alexander-Arnold and Lovren could easily defend against them. If the full-back did move out to engage the Roma wing-back, then one of the midfielders could just step in to fill the gap if needed anyway.

As a result most of Roma’s attacks were just crosses from the wing-backs that were easy for Liverpool to defend – Dzeko, Under and Nainggolan against Liverpool’s back four plus Henderson and the opposite side’s midfielder tucking in meant Liverpool always outnumbered Roma.

It took 35 minutes for Liverpool to break the deadlock but they had been in complete control except for a brief period when their rhythm dropped after Oxlade-Chamberlain went off injured, with Roma’s plan not working at all. Roma cleared an attack but Liverpool won the ball back in midfield and got Firmino running at the defence, Kostas Manolas dropped off to stop Mohamed Salah space to attack behind him, but the Egyptian pulled wide and instead Manolas’ positioning just gifted him enough space to pick out a perfectly-placed shot on his left foot.

Liverpool then got a second just before half time. Van Dijk headed away a cross, then the ball fell to Salah, who moved it on first time to Firmino. The Brazilian then evaded Manolas’ challenge and ran at the defence, while Salah was sprinting into the space behind. Firmino played a through ball for Salah to run onto, who dinked it over the keeper rushing out.

The second half was then a interesting example of the effects of mentality on a match. Roma had set up with a bad plan that put them on the back foot, but they had remained competitive throughout the first half. Di Francesco substituted Under for Patrik Schick and moved Nainggolan a bit deeper, creating more of a 3-5-2 shape, however Roma appeared to have given up – few players were showing for the ball and many were just walking around rather than tracking runners. There was more pressure on the ball from the frontmen, however once it was moved past them the team was going through the motions – neither Nainggolan or Strootman seemed to bother any more than a jog to get back once the ball reached Roma’s backline.

Unsurprisingly things quickly went from bad to worse. Alexander-Arnold hit another long ball in behind Roma’s defence for Salah and he squared for Mane to finish, and then they did the same again minutes later – this time to set up Firmino. For Liverpool’s fifth and final goal, not one Roma player jumps to contest the corner.

Shortly before that set-piece though, Di Francesco finally rearranged his team, bringing on Diego Perotti and Maxime Gonalons for Juan Jesus and De Rossi. They changed to a 4-3-3, with Schick and Perotti flanking Dzeko and Gonalons protecting the back four.

Aware Roma were broken, Liverpool also eased off. Salah was removed for Danny Ings and the team just seemed to generally lose concentration: they were too casual on the ball – Lovren taking so long to clear a ball that a Roma attacker was able to close him down and almost scored when the ball cannoned back off him – or were lazy in their body shape, retreating backwards face on to the ball rather than side-on. A series of referee decisions and tackles also seemed to rile Roma back up, meaning that Roma were back to being engaged in the game just as Liverpool were disengaging.

This came to a head when Roma finally pulled one back. Nainggolan wasn’t closed down in the midfield, giving him enough time to pick out a pass over the head of Lovren for Dzeko to finish.

Liverpool then seem rattled and the momentum is with Roma, who get a second minutes later through a penalty. Klopp introduces another defender in Ragnar Klavan for Firmino and Liverpool see out the game, however what was one of Liverpool’s great European nights twenty minutes before (and it should still be considered so despite the goals), took on a different air at fulltime. Questions could again be asked over Liverpool’s defending, especially given the way Roma came back against Barcelona with an away goal.

Roma have kept a clean sheet in every Champions League home game this season, whereas Liverpool have scored in every away game, so something will have to give in the return leg.