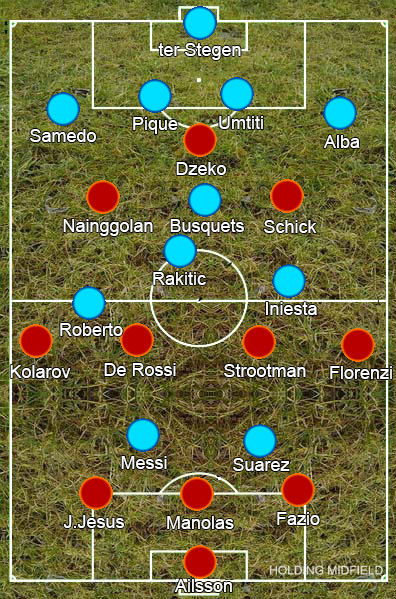 Having lost the tie in Barcelona, Roma’s hopes looked dead and buried, even if they did manage an away goal.

Eusebio Di Francesco switched his team to a 3-4-3 shape, while Ernesto Valverde continued with Barcelona’s narrow 4-4-2.

Roma started the game pressing high up on Barcelona’s defence. Edin Dzeko would stand between the two centre-backs, cutting off the pass between them, while Radja Nainggolan and Patrik Schick would be tasked with pressing them – Schick would generally angle his run so that Samuel Umtiti couldn’t pass to Jordi Alba, whereas Nainggolan would make his runs from central areas, as Nelson Semedo would often drop deeper on the right than Alba did on the opposite flank. This meant that Semedo was often in the same line as Gerard Pique, so Nainggolan was able to press either of them depending on who had the ball, changing the angle of his run if Pique moved it on to Semedo while Nainggolan was making his run.

Daniele De Rossi, Kevin Strootman and the opposite winger tucking in on the opposite flank would protect the centre, keeping close to Sergio Busquets, Ivan Rakitic and Andres Iniesta. If the ball was passed back to Marc-Andre ter Stegen, Dzeko would then close him down, his central position allowing him to get on top of him quickly.

As a result, the centre-backs didn’t have any passing options and mostly had to send it long. If they were able to get the ball into their feet, Lionel Messi and Luis Suarez could make these long balls work, having the technique and speed to run at Roma’s backline, however they were unable to compete in the air so most of these long balls ended up giving the ball back to Roma.

Barcelona had a much harder time dealing with Roma. Firstly, Nainggolan and Schick would come inside to play between the lines, forcing Barca’s backline into narrowing to ensure the attacking three couldn’t outnumber the two centre-backs. This meant there was acres of space for Aleksandar Kolarov and Alessandro Florenzi on the flanks.

There generally seemed to be a lack of organisation in Barcelona’s defending that added more problems. Pique and Umtiti often stepped up as though they were trying to minimise space between the lines for Nainggolan and Schick, giving Dzeko space to run in behind them, but Barcelona’s midfielders were dropping off as if they were trying to focus on blocking passes into the Roman attackers. As Suarez and Messi were staying high up the pitch, this meant there was no one putting any pressure of Strootman and De Rossi at the base of the midfield. Barcelona were playing a high line, giving Roma a big space to target with balls in behind, while also having no pressure on the ball, giving them the time and space to pick out those ball over the top.

This problem was made clear in the opening goal: De Rossi has lots of space to ping a ball over the top for Dzeko to chase.

The rest of the first half was very bitty, with Barca struggling to deal with Roma’s intensity, but also the referee constantly blowing for fouls, meaning the match was rarely able to settle into any rhythm. Roma were on top, constantly getting at Barca with direct passes up to the forwards. They would also frequently got the ball out to Florenzi on the right to cross, with Dzeko, Nainggolan, Schick and Kolarov all attacking the box.

Roma couldn’t keep up the intensity, not pressing as high in the second half, but their midfield still battled hard, constantly winning the ball back when the ball went into the middle. Barca’s midfied was at least pushing up to deny De Rossi and Strootman space now though, so, while Roma were still dominating, Barcelona were able to make it harder for them.

At least until Roma got their second through a penalty. A loose ball fell to Nainggolan, (having both Nainggolan and Schick flanking Busquets meant that they were generally in a good position to pick up these second balls) who lifted the ball first time for Dzeko to chase. Pique brought him down in the box and De Rossi scored the resulting penalty.

Di Francesco replaced Nainggolan and Schick with Stephan El Shaarawy and Cengiz Under to add more legs to a frontline that had done a lot of running and they continued to pin back Barca. Roma kept pushing men forward, trying to outnumber Barcelona’s backline, and hitting quick balls forward as soon as they won it back, but Barcelona were just about managing to hold them off.

Then with ten minutes left Kostas Manolas sprinted towards the near post at a corner, perfectly timed to meet Under’s cross, his marker Semedo unable to get close as he nodded home the goal that would see them through.

Having already removed Iniesta for Andre Gomes, Valverde threw on attackers, substituting Semedo and Busquets for Ousmane Dembele and Paco Alcacer and pushing Pique up front, but they couldn’t threaten Roma.

Di Francesco found a set-up that managed to nullify Barcelona’s strengths and exploit their weaknesses. Rather than alter his strategy, Valverde sat on his lead, hoping it would be enough to see out the 90 minutes. It wasn’t and by the time they realised, Barcelona didn’t have enough time to reply.