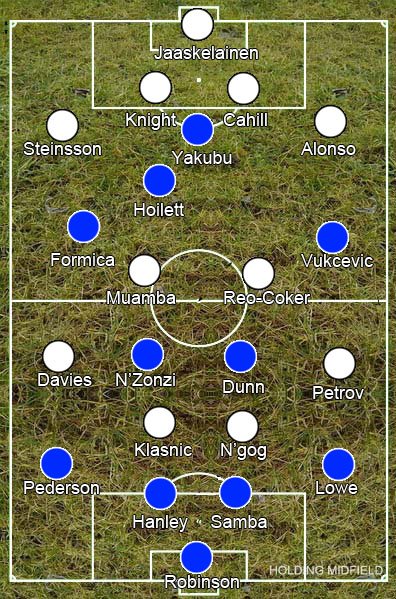 With both teams’ managers under pressure, especially Steve Kean, this was a so called “six-pointer”. Blackburn were a point ahead before the game and, with them having Liverpool next and Bolton playing Newcastle, both teams would have wanted to win this to at least give them some confidence going into some tough games.

The game started rather scrappily with both teams giving away free kicks in what was a quite uninteresting game tactically. The two teams started out in 4-4-2/4-4-1-1 shapes so there were obvious battles on the pitch: the wingers against the fullbacks, the central midfielders up against each other and the four attackers each having a direct opponent. It was interesting that David N’gog started over Kevin Davies as Blackburn generally play deep. Ivan Klasnic and Junior Hoilett dropped deeper without the ball although Hoilett generally played offÂ  Yakubu. N’gog very early on was drifting out wide to the flank and this is where the first goal came from, as he got it wide in the box for Mark Davies to score.

After the goal Bolton were more dynamic in their 4-4-2 as Nigel Reo-Coker surged forward often and left Fabrice Muamba to sit deeper as Bolton didn’t have to worry about being over ran as it was 2 against 2 in the middle and Bolton looked more likely to create something.

Blackburn on the other hand were very lacklustre as they often tried to play it long to Yakubu. There were three problems with this:

The only way Blackburn looked like they could really penetrate was by Mauro Formica cutting in with Morten Gamst Pederson on the overlap and it’s surprising Kean didn’t encourage this more. On the other flank Blackburn were again predictable as Simon Vukcevic did look to cut inside, however, with Jason Lowe not overlapping, Alonso could just follow him inside. If making Dunn stay deeper to dictate play was Kean’s idea, they didn’t give him enough of the ball – however he did show what he could do sporadically, spraying balls to Hoilett when he drifted wide. Blackburn’s best moments came when Formica drifted inside and used his vision and technical ability and when Hoilett pulled out wide and used his pace.

After the break Kean seemed to realise where Formica and Hoilett could do the most damage and switched. As Blackburn looked for goals, their forwards started to push up more to stop Bolton playing from the back but for some reason N’Zonzi and Dunn didn’t. This meant Bolton’s midfield, especially Reo-Coker, were in masses of space to counter but couldn’t capitalise, making poor decisions on the ball.

Late on in the game Ruben Rochina and David Goodwillie came on – Rochina played closer to the centre than Vukcevic and Goodwillie played alongside Yakubu. This exposed Knight for the first goal as Bolton didn’t have a spare man at the back and Yakubu was one on one with Gary Cahill to score.

Very late on in the game, Bolton changed to a 4-1-4-1 with Darren Pratley coming on for Klasnic, forcing Blackburn into wide areas where Bolton could deal with the resulting crosses all day long.

It was a good win for Bolton despite being made very easy for them by Blackburn.