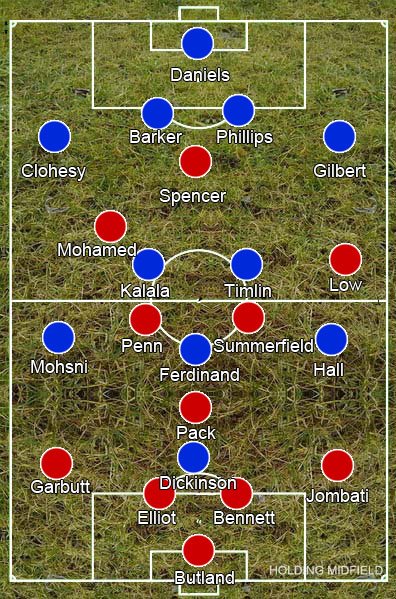 With the new year approaching fast, both Cheltenham and Southend were looking to get three points to drag themselves away from the chasing pack in the play-off spots.

The match started with both teams exchanging long balls, which tended to suit Southend more. The two sides tried similar moves from the long balls: for Cheltenham, Jack Butland would hit it forward for Jimmy Spencer, who would move out closer to the left, to knock it down for Kaid Mohamed to pass it onto the onrushing Russell Penn, who would make diagonal runs from midfield behind the right back, while, for Southend, Liam Dickinson would drift wider and look to flick it on behind the defence for Ferdinand to run onto. This suited Southend as Dickinson was more of a target man than Spencer, who was more of a mobile lone striker, and Southend’s defenders would frequently beat him in the air.

However, when the ball was kept on the ground, Cheltenham had theÂ  better of the game. The key battles appeared to be between the wingers and full-backs and Pack and Ferdinand – Cheltenham generally seem at their most dangerous when the ball moves down the left, where the tricky right-footed Mohamed can cut inside and run at defenders or link up with Everton loanee Luke Garbutt. When Mohamed does opt to move inside, Pack will usually move out to the left, which allows him to cover defensively but also find space. This is crucial as it means that, should the move break down on the left, they can knock it back for him to hit cross-field for right-back Sido Jombati to advance.

The issue with Jombati advancing is that Dickinson would drift behind him, dragging Alan Bennett with him and freeing up space in the middle for Ferdinand to run into. Once Southend won back the ball they could hit it to Dickinson to pass it on for Ferdinand – even when they were being more patient, Ryan Hall would play deeper to drag Jombati up the pitch to engineer that space for Dickinson to move into. This meant that Pack was really needing to keep an eye on Ferdinand, limiting his ability to find space freely, but he generally did a very good job defensively. However, one of the bonuses of him being forced to come deeper was that he was able to pick up the ball from Butland – this deep positioning allowed him the space to pick out passes more easily or run a bit with the ball, which generally helped Cheltenham as he is very impressive technically and their best passer.

Shortly after Cheltenham went one up through Spencer, Paul Sturrock inverted his wingers. Hall continued to be fairly anonymous on the right, but the switch allowed Bilel Mohsni to link up more with Dickinson, giving him more support. The switch allowed Southend more influence on the game, but shortly after half-time a period of Cheltenham pressure put them two up – Peter Gilbert clearing off the line from a Spencer shot before Penn finished the follow up.

With a two goal lead, Cheltenham looked to shut up shop, sitting deeper and hitting Southend on the counter. Southend were smart and looked to keep possession, patiently probing for chances, but Cheltenham’s deeper positioning allowed more space in midfield – this was somewhat dangerous as it afforded Southend’s midfielders and defenders the chance to run at them, but also opened up more space for themselves, which Mohamed particularly took advantage of, frequently cutting in to run at southend’s defence on the counter.

Eventually, Southend changed to a three man defence. Attacking wise, this was a good move as it allowed the defenders to move up the pitch and the rest of the team to station themselves higher, but it didn’t work defensively – Luke Summerfield catching them out on the counter to set up Pack for a deserved goal.

A comprehensive and dominant performance by Cheltenham that solidifies their place near the top of the table, but the travelling Southend fans will wish they had gone to the races instead.