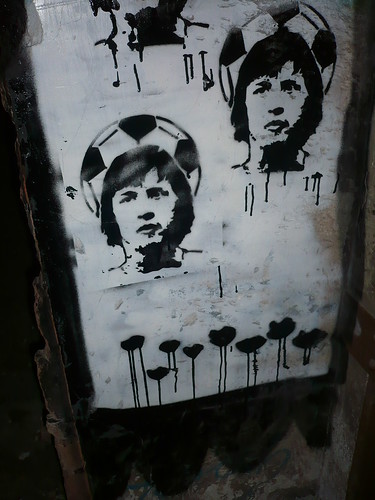 Total Football might well have been the worst thing to have happened to Dutch football. The greatness of Rinus Michel’s creation hung a weight around the necks of the generations that followed. Having experienced the teams of the seventies, those that followed not only had to win, but do so in style. With the eyes (and more importantly massive mouth) of Johan Cruyff watching over them, it has written a cheque most Dutch teams haven’t been able to cash. They weren’t half good though.

The homogeneous style now wanted by the likes of Cruyff was born out of Dutch football being a blank canvas. As the boom of professionalism emerged in the mid-fifties the Dutch were still using the 2-3-5 formation rather than the W-M with its rigid man-to-man marking, which allowed for the ideas of pressing to blossom: it was easier to think about space rather than just 11 battles over the pitch when not every man had a direct opponent to mark, and the increased fitness professionalism brings made chasing around to win the ball back a viable option.

However, what they did when they got the ball was something an Englishman taught them. Jack Reynolds became Ajax manager during the first World War and initiated the success of the Amsterdam side, insisting on a passing game uncommon in his homeland. Over 27 years and three spells, Ajax won eight Eredivisie titles and a KNVB Cup, neither of which they had won before. After him came Vic Buckingham, who continued their success. He returned to England to manage Sheffield Wednesday, only to head back to Amsterdam in 1964, where he would find himself sacked at the start of the new year with Ajax languishing around the relegation zone. To replace him Ajax turned to one of their former players: Rinus Michels.

As a player, Michels had been easy-going joker, however, when he turned to coaching, his focus became about discipline, much like Reynolds’ – his demanding attitude necessary for the intense style of play he wished to impose on the team. Michels’ initial objective was to avoid relegation, doing so by switching from Buckingham’s fluid W-M to the 4-2-4 popularised after the 1958 World Cup. The following season they won the league, and they would go on to do so several more times over the next few seasons, also catching attentions in Europe with a 5-1 win over Bill Shankly’s Liverpool and a run to the 1969 European Cup final, where they lost to AC Milan. Still, albeit attacking, it wasn’t the Total Football they would become famous for.

The first step in that direction was the signing of Velibor Vasovic from Partizan Belgrade. Michels was ruthless in his attempts to improve the team, so when captain Frits Soetekouw scored an own goal to send Dukla Prague through in the 1966 European Cup, he was sold to PSV Eindhoven and replaced by Vasovic. Partnering Barry Hulshoff in the centre of defence, the Yugoslavian was a key component of Ajax’s change – something he is all too aware of: “When I came, I preferred to play a kind of total football. I played the last man in defence, the libero. Michels made this plan to play very offensive football. We discussed it. I was the architect, together with Michels, of the aggressive way of defending. I did the small things, like make an offside or stand in the wall to make a gap for the goals.”

Obviously not a modest man but not possessing wholly inaccurate views either. I say “wholly” because he had some notable help too. Ajax achieved great success in the latter half of the sixties, yet many of their players weren’t of great quality, so Michels weeded them out and replaced them with superior ones. Gert Bals, Tonny Pronk, Klaas Nuninga, Bennie Muller and Theo van Duivenbode were deemed not up to standard and were swapped for Hulshoff, Gerrie Muhren, Heinz Stuy, Ruud Krol and the most significant of all: Johan Neeskens.

Vasovic’s ability to step out and catch opposition forwards offside was invaluable to Ajax as they adopted a high line, but it was the arrival of Neeskens that triggered that level of pressing. Although an excellent passer and dribbler, it was Neeskens’ sheer aggression that made him stand out. When he first arrived, he hassled the opposition by himself, but his intensity rubbed off on his teammates, and so Ajax began to hunt in packs, closing down around players with a vigor that hadn’t been seen before and has rarely been seen since.

Having been regularly outnumbered in midfield, Michels shifted to the 4-3-3 rivals Feyenoord used, although Vasovic’s positioning made it more of a 1-3-3-3, giving them more of a footing in midfield. When they didn’t have the ball, they aimed to squeeze the opposition, making the opposition’s playing field smaller by catching them offside, but when they had the ball they would drop off to increase their available space, while Vasovic would often step into midfield to give them an extra man.

In possession, Michels continued the work done by Reynolds and Buckingham by encouraging pass-and-move football, but he expanded on the works of others too. Movement had been seen before in the Mighty Magyar Hungarian side and Passovotchka Dynamo Moscow side, yet not to the extent that Ajax used it. In the Total Football side, everyone would interchange, rather than just a handful up front: a winger could come inside to play as a striker, swap with a midfielder or cover the full-back behind him and so on. Having a striker cover for a centre-back was dangerous, yet, with his teammates hounding opposition players the second he got the ball, playing the pass forward to take advantage of the situation was difficult. The result was that Ajax’s players were total footballers: all able to attack to devastating effect and defend with intensity.

After winning their first European Cup in 1971, Rinus Michels left for Barcelona, where he would instill the values of total football that remain to this day. He was replaced by Stefan Kovacs, who was far less strict than his predecessor. This was a good thing in some respects, as the players had started to tire of Michel’s approach, and their play on their way to a second European Cup was probably the best incarnation of the team, with their final victory over Helenio Herrera’s Internazionale their finest moment. The Ajax board worried Kovacs was too lenient and planned to sack him, despite winning the treble, until player outrage forced them to reverse their decision. Kovacs continued and their play the next season was just as good as the previous one, leading them to a third consecutive European Cup.

Kovacs ended the debates over the freedom he gave the players by leaving to manage France, succeeded by George Knobel. Upon his arrival, Knobel let the players vote for who they wanted to be their captain. Cruyff was the star of the team and had become a large influence on the tactics of the team, particularly as he aged, yet his teammates had come to resent him so voted in favour of Piet Keizer. Furious at losing the captaincy, Cruyff followed Michels to Barcelona to help export Total Football. Meanwhile, Ajax crumbled quickly and Knobel was sacked the following year, blaming the players’ drinking and womanising for their failure.

Just as years of work were reaching their climax, everything collapsed. A huge milestone in football was torn apart by petty squabbles. Regardless, a huge collection of Eredivisie titles, three consecutive European Cups and a style that changed football forever makes the Total Football Ajax side inarguably one of the greatest teams of all time.