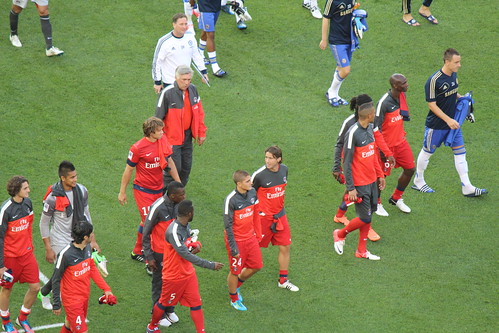 French football is a pretty bizarre environment. Their national team doesn’t really need to be discussed: the Raymond Domenech era was a psychiatrist’s wet dream, and the failure of a hugely talented generation seems to have come about mainly because one man, Zinedine Zidane, retired. The oddities extend to their domestic game too, however.

For one, despite France being one of the more established footballing nations, Ligue 1 has always been a substandard league. Between them, French clubs have only ever won one European Cup – when Marseille beat AC Milan in 1993, and even they were banned from competing the next year, when a match-fixing scandal emerged.

The more puzzling thing about French football is just how little the capital means to its game. It’s not rare for provincial clubs to dominate, but the way Paris has been sidelined takes it a bit far. The capital has just two clubs, Paris Saint-Germain and Paris FC, since their split in 1972. The latter have spent most of their time in the amateur leagues, while PSG have only ever won the top flight twice, even though they have had some heavy backing at times – not least when Canal+, the French broadcasters who owned the rights to Ligue 1 at the time, owned them during the nineties.

This has all changed though with their Quatari takeover. In cames the likes of Javier Pastore, Salvatore Sirigu, Momo Sissoko, Jeremy Menez and Kevin Gameiro, yet against the odds Montpellier finished top of Ligue 1 last year. Not to be beaten again, PSG have spent so much money on red and black you would think they were going to play american roulette, bringing in Milan stars Zlatan Ibrahimovic and Thiago Silva for a combined fee of around â‚¬60 million, along with Ezequiel Lavezzi from Napoli.

With all the money behind PSG, the 2011/12 title had seemed like a forgone conclusion, however a series of draws and losses to Nancy and Lille sent the Ligue 1 crown away from the capital yet again. My knowledge of that season is mainly limited to what others have said, but judging by their three draws at the start of this season, their problems weren’t just small hiccups.

The question now is how coach Carlo Ancelotti, who took over the club in December of 2011, opts to set up the side. An attacking but pragmatic manager, Ancelotti has mainly chosen a 4-3-2-1 for his side, shifting from the 4-2-3-1 Antoine Kombouare used. The more narrow formation is typical of the Italian, whose most successful set-up was a 4-3-1-2 at Milan and he adopted a 4-4-2 diamond to some success at Chelsea, yet the French league seems less accommodating to his tactics. As the big boys everyone wants a shot at, there is an emphasis on PSG to break down the opposition, and so far this season, they have struggled to find that balance between defence and attack.

In attack, the arrival of Ibrahimovic not only brings PSG one of the world’s best strikers, but also one of its most complete: the Swede is tall and strong, perfect for playing as a target man, while he takes the phrase “good feet for a big man” to its extreme, essentially playing as a trequartista for his national team. Throw in a regular 20+ goals a season and you have arguably the greatest frontman money can buy, with the pacey Kevin Gameiro providing a decent back-up.

It’s in the two spots behind Ibrahimovic where things start to get interesting. The Parisians have amassed a collection of playmakers and exciting wingers, offering several different options for their needs. Pastore is the enganche, providing the passing link between midfield and attack; Lavezzi the inconsistent but talented inside forward, popping up with goals and direct running; Menez, the closest thing PSG have to a proper winger – able to beat his man and cut the ball back, while also encouraged by Ancelotti to slow things down and stay inside; and Nene, a tricky dribbler that will more than likely end up last in the pecking order, having not taken the loss of his star status since the Quatari takeover well. Each man gives a different option, but they are also flexible – different yet suited to the technical game Ancelotti employs.

The proper width is provided by full-backs Maxwell and Christophe Jallet. The former Internazionale and Barcelona man is a solid defender and a capable attacker, having regularly turned out as a winger at his previous clubs, while Jallet also likes to go marauding up the pitch, turning up occasionally as a winger under his previous coach, although he is less dependable at the back. With the full-backs needing to get forward and the attacking trio not the most defensively sound, the midfield tends to be made up of defensive-minded players to even it out and cover: Momo Sissoko, Blaise Matuidi and Thiago Motta are all good players, however they can’t really be described as the most forward-thinking options. Pastore has dropped into midfield on occasion, while Mathieu Bodmer and new signing Marco Verratti are more technical options. Simply throwing more attacking players doesn’t help equal out the attacking and defensive duties of the team.

Without the ball, PSG set themselves up in a deep 4-3-3 shape. When the front three push up to press the opposition players, the midfield must also push up to avoid leaving to obvious a gap for their opponents to exploit. By doing this however, they are also making the gap between themselves and their defence bigger, these spaces stretched even further if the full-backs haven’t got back from their attacking duties quick enough. In their opening game against Lorient, this became quite evident when a simple one-two between Kevin Monnet-Pacquet and a tottaly free Alain Traore took Jallet out of the game – Alex was caught in two minds and unable to get across in time to close down Monnet-Pacquet’s cross, which was unfortunately turned in by Maxwell. For their second, Jeremie Aliadiere pulled into the space behind the attacking Jallet and had the time to control the ball and steady himself to put the ball past Nicholas Douchez again.

The swapping of Douchez for Sirigu and Thiago Silva for one of physical young captain Mamadou Sakho or Alex may improve the odds of a clean sheet a bit, however there’s clear clear problem here: the defence is left so stretched that any quick ball forward leaves PSG’s defence stranded – stuck between dealing with the problem and just trying to slow it down, ending up doing nothing.

The two 0-0 draws that followed the game against Lorient shows that providing more cover isn’t a viable solution either. More defensive players means less attacking players, and with opposition teams more than happy to settle for a draw, PSG need all the attacking players they can get. If Ancelotti throws in more attackers, PSG’s defence is left exposed and they concede; if he throws in more defenders, they can’t score. Money may have brought some of the world’s best players to the French capital, but it hasn’t found a way to successfully put them together yet.

4 thoughts on “What’s the plan for Paris Saint-Germain?”