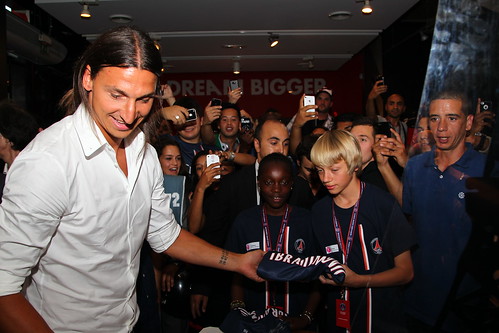 Like last year, this isn’t a rundown of the best transfers – it’s a look at the more interesting ones, so while Jordi Alba’s move to Barcelona and Tottenham’s acquisition of Hugo Lloris are very good buys, but they are simple upgrades to improve their teams rather than changing their style.

Although the pair seem to be simply upgrades over what PSG previously had, it will be interesting to see if their class is enough tip ties in the capital club’s favour. As things stand, PSG haven’t got the balance to take apart teams who consider them the top dog. Nevertheless, Ibrahimovic was frequently a one-man attacking show at Internazionale and Thiago Silva won’t stop the stretching of the defence but may lessen the chance of conceding.

After losing Andy Carroll, Dirk Kuyt, Maxi Rodriguez and Craig Bellamy over the summer and missing out on the versatile Clint Dempsey, Liverpool fans have rightly been worried about where the goals are going to come from, weakening what was already a wasteful frontline last year.

Nevertheless, the signing of Borini was the obvious solution to their goalscoring problems. While Liverpool’s play wasn’t particularly good, their issues were exaggerated by their complete inability to convert the many chances they created., having spent all their money on players with good chance creation statistics and ignored goalscoring ones. In Borini, they now have a fairly limited player, but one whose talents revolve around scoring goals. The Italian remains unproven, with his only goals at the highest level coming in tricky season for Roma, althoughÂ  Borini was one of their stand out performers and Brendan Rodgers knows he fits into his system – he spearheaded Swansea’s attack at the tail end of their promotion season and played under him in Chelsea’s youth team.

The other interesting element is where the skinny forward will play. Previously under Rodgers, he led the line as expected for a poacher, finishing chances as the focal point of the attack. However at Roma he was more commonly used out wide, similarly to Gary Lineker at Barcelona, in an attempt to get him more involved in build-up play – which works: his game focusses on goalscoring, but he’s neat in his passing too – and make him harder to track for defenders. So far, he has mainly played out wide for Liverpool to mixed success, although he did lead the line in the first leg against Hearts, where he found himself without much supply so had little influence on the game.

QPR’s squad has taken a rather bizarre turn. Last summer, after securing promotion to the Premier League, they raided the relegated clubs for their established players, while adding the odd unwanted player from higher clubs, like Joey Barton and Shaun Wright-Phillips. This summer, after narrowly avoiding relegation on the last day of the season, Mark Hughes has completely remodelled the squad in his first full transfer window. In have come some established players from around Europe, the likes of Stephane Mbia, Ji-Sung Park, Esteban Granero and Jose Bosingwa now mixing with Shaun Derry and Rob Hulse. The most interesting buy though, was Julio Cesar. The Brazilian was unwanted at Inter and seemed to be on his way to Tottenham, yet ended up at Loftus Road despite QPR having already brought in Rob Green this summer.

After a torrid two seasons – for most of Inter’s squad, not just the Brazilian – the Milan giants opted to ditch Julio Cesar for Samir Handanovic. With the defence in front of him fading fast, Julio Cesar looked increasingly shaky in goal, making far more mistakes now he wasn’t so protected. He also wasn’t helped by several managers trying to instill a high line at Inter, given he didn’t have the agility to step off his line and confront opposition attackers and isn’t that special with his feet.

What he is, however, is a very good shot stopper, and the change of setting might help him get his career back on track. At his peak, he was among the best keepers in the world, so a move to a less pressured environment at a lower club, where he will have more chances to show what he is good at, should suit him. Still, at 33, there’s no guarantee it’s going to work, much like the rest of QPR’s project.

Like Julio Cesar, Maicon has been on the decline since the treble-winning season at Inter, but whether or not it is simply a matter of him aging or not is less obvious than some of his, now former, teammates. Maicon at his peak was considered so good because he was incredibly dangerous going forward yet also stable defensively, but that balance was afforded to him by the covering of other players. When those covering players declined, the space Maicon left was now far more open, and his shirking of defensive duties more heavily criticised. Without sufficient cover, Maicon couldn’t be confident attacking, so both sides of his game suffered. If they can get him on form and give him that cover, City will have a brutal battering ram of a full-back storming down the wing, but if not they have little to lose: the expense means little to them and they have plenty of dependable replacements.

The other interesting note about the move is the signals it gives out about Roberto Mancini’s intentions. The arrival of a more attacking wing-back from his former club suggests he is looking to make his recent experimentations with a three man defence one of his more common set-ups. Also taking into account the swapping of Nigel de Jong for Javi Garcia, it appears Mancini is continuing to develop City using the ideals of universality, with all players able to attack and defend, like his Fiorentina. A good sign given the way he seemingly shut up shop at Inter and left the attacking to Ibrahimovic.

Given the way the saga’s dragged on, Modric’s move to the Spanish capital should be pretty boring by now, however the lack of an obvious place in the side for the Croatian leaves some questions unanswered. Last year Madrid brought in a similar player to Modric in Nuri Sahin from Borussia Dortmund, yet there was no place for him in the team and he made just four league appearances, never completing a full game.

A year on, Sahin has been loaned out to Liverpool but the problem has been passed on to Modric: Xabi Alonso is one of the world’s best holding midfielders and removing him from the base of the midfield may leave them too open in front of the defence; Modric can’t provide the combative bite of Sami Khedira next to Alonso, leaving the midfield too lightweight; and, while he could replace Mesut Ozil, he is now established as a deeper midfielder and the Turk is arguably more accomplished than him. Modric combines the elements of all three midfielders, but can’t easily replace any of them. Still, having spent Â£33 million on him, Jose Mourinho can’t just leave him out.

Obviously the Dutchman is one of the world’s best strikers, but, looking at United’s squad, it didn’t look like they needed him. A hat-trick against Southampton is a good sign, but the two goals the team conceded hints at a deeper problem, which we have looked at here.