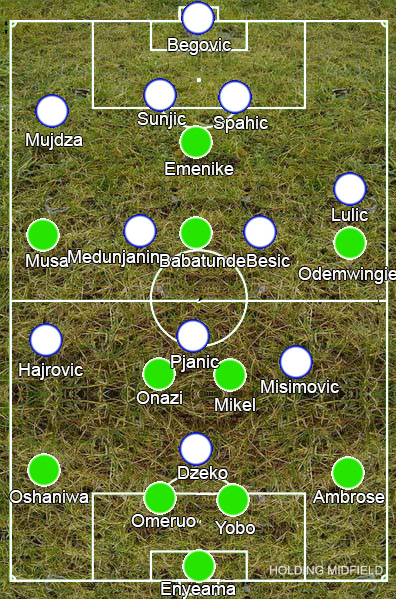 This game was lined up as both teams’ best chance of a win. Bosnia & Herzegovina had defended valiantly against Argentina, but were clearly best set up to be more proactive, and Nigeria are at their best on the counter-attack so never looked like breaking down Iran.

Both coaches made several alterations to their sides. Safet Susic continued with a 4-2-3-1, but Miralem Pjanic was pushed forward and Zvjezdan Misimovic moved out to the left, Haris Medunjanin going into the deeper midfield role and Senad Lulic was pushed back to cover for the injured Sead Kolasinac at left-back. Stephen Keshi named a more attacking line-up, changing to a 4-2-3-1 with Peter Odemwingie and Michael Babatunde named in place of Victor Moses and Ramon Azeez, and Joseph Yobo filling in for the injured Godfrey Oboabona.

The first half was entertaining and fairly open. Bosnia & Herzegovina were unlucky not to take the lead when Edin Dzeko’s goal was wrongly ruled out for offside – one of many lovely to watch passing moves from the Bosnians, with Dzeko’s movement posing consistent problems for the Nigerian defence throughout the half.

Nevertheless, it was Nigeria who officially took the lead. While Pjanic was excellent in his more advanced role, it also caused a number of issues. Firstly, it meant he was easier to track and making late runs from deep might have suited Bosnia better. Secondly, it meant shifting Misimovic out to the left, a typical number ten who looked lost out wide and ended up drifting inside anyway. Lulic would then have to storm down the left to provide width on this wing, which played directly into Nigeria’s hands.

The Bosnian defence, particularly Emir Spahic, looked shaky early on, misplacing simple square passes and making easy defensive mistakes, and it wasn’t long before Emmanuel Emenike had the better of them. Whenever Lulic moved forward, Emenike would move out into the right channel, isolating his marker Spahic. When Nigeria regained the ball, they could hit it towards Emenike, who, strong as a bull and twice their speed, was unstoppable for the Bosnian defence. For their goal, he managed to both outpace and bully Spahic off the ball before squaring it to Odemwingie for a calm finish.

Nigeria came out for the second half sitting much deeper and looking to play it early behind the Bosnian backline for Emenike. Susic threw on attackers Vedad Ibisevic and Sejad Salihovic in search of a goal, but Nigeria defended well and Bosnia & Herzegovina barely mustered a chance in the second half.

It was a disappointing exit for the World Cup debutants, especially when they had some a good opportunity to get out the group stage, but credit must go to Keshi for the way in which he altered Nigeria after their poor initial showing .