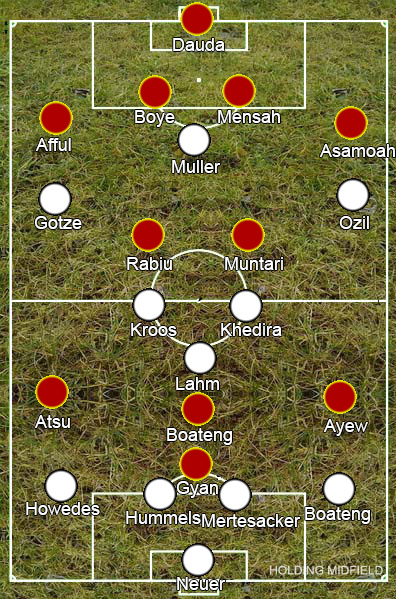 If their first games were anything to go by, this wouldn’t be much of a contest. Although helped by a red card, Germany made easy pickings of Portugal, looking comfortable prior to Pepe’s dismissal, while Ghana, although not the worst team at the tournament, looked the worst organised side so far against the United States. That fluid attack would destroy Ghana’s open defence if they continued in the same vein.

Joachim Low made no changes to the 4-3-3 that won 4-0, and Kwesi Appiah made three changes, bringing in Fatawu Dauda, Harrison Afful and Kevin-Prince Boateng for Adam Kwarasey, Daniel Opare and Jordan Ayew.

Thankfully, Ghana wereÂ  much better organised than they were against the United States. Boateng would look to stop the ball coming into the feet of the deepest midfielder, typically Philipp Lahm but he would also change places with Toni Kroos in an attempt to evade Boateng. This still wasn’t perfect however – there often wasn’t much pressure on the ball yet Ghana’s defensive line remained quite high and Germany’s attackers were able to spin in behind a number of times in the first half.

Germany should have exploited this more than they did, but the Bayern Munich influence is plain to see in this team. They wanted to play the ball patiently out from the back, yet were thwarted in the middle by a solid Ghana midfield and neither Benedikt Howedes or Jerome Boateng, naturally centre-backs, looked comfortable venturing forward from full-back. Playing more simple balls over the top would have probably pinned Ghana back more, yet their insistence on mimicking tiki taka meant they generally played into Ghana’s hands. Their issues at full-back also bring into question why they are playing Lahm in holding midfield – he has done well there for Bayern, but the level of his play doesn’t vary from what he offers from full-back, and, seeing as they are better stocked in midfield than at full-back, you would think it would be better for him to play in whichever area the second choice player is weakest. They did open the scoring with one of the few times they managed to play it through the middle – a testament to their quality – but the strategy didn’t really work over the 90 minutes.

Not long after, Ghana equalised. Both Christian Atsu and Harrison Afful had caused all kinds of problems for Howedes in the first half with their pace and the Schalke man was now trying to ease off when defending against them so they couldn’t burst past him. Howedes’ reluctance to get too close to Afful, lest he sprint past him for the umpteenth time, gave the right-back the time and space to drop a cross onto Andre Ayew’s head. ShkodranÂ Mustafi had replaced Jerome Boateng on the opposite flank as he was more comfortable getting forward, yet Appiah’s introduction of the speedy Jordan Ayew meant Ghana were able to quickly exploit the space behind him whenever Germany lost the ball.

The tempo of the game rose further, which suited Ghana far better than Germany. Sulley Muntari pounced on a sloppy ball from Lahm to slide a pass perfectly into the feet of Asamoah Gyan to finish, but substitute Miroslav Klose was able to rescue a point for the Germans, equalling Ronaldo’s World Cup scoring record with a tap-in from a set-piece. The game was one of the best so far, the end-to-end play exhausting the players by the final whistle, and a lot of credit must go to Ghanaian centre-backs John Boye and Jonathan Mensah for their superb individual performances.

Ghana exposed some major deficiencies in the Germans’ style and, with some better decision-making from Jordan Ayew, probably would have won. If Portugal can avoid defeat against the USA, Group G will be the most interesting going into the final game.