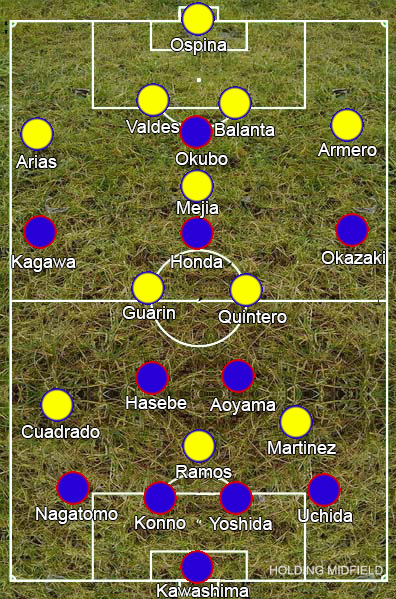 Four continents in a group and all still had the potential to progress. The Colombians were by far the most convincing, smashing Greece while running at 50% and edging out Ivory Coast. By contrast, Japan had disappointed, surrendering their lead against Ivory Coast and unable to even test a ten-man Greek side. With Colombia already through though, Japan’s chances were looking up.

Jose Pekerman made wholesale changes to his team, also changing to a 4-3-3 shape, while Alberto Zaccheroni brought back Shinji Kagawa on the left and gave Toshihiro Aoyama his first start in a 4-2-3-1, leaving Yuya Osako and Hotaru Yamaguchi on the bench.

Japan were much the same as they have been in every game so far: providing some nice passing moves and technical interplay, but rarely creating any real chances. The Colombian midfield were keeping close to each of their opposite number, with Alexander Mejia sticking particularly close to Keisuke Honda. Colombia semi-regularly formed a back five when Honda moved forward into striking positions, opening up space in front of that defensive line for his teammates to make use of seeing as he was too closely marked to have much of a say.

Japan’s hopes took a dash when Yasuyuki Konno gave away a penalty for a truly stupid foul. Adrian Ramos was already heading wide from a not particularly dangerous position in the box, yet Konno opted to slide into him rather than stand him up. Juan Cuadrado scored the resulting penalty and it now looked too much for Japan to qualify.

Briefly before half-time, Shinji Okazaki grabbed one back. Honda had drifted wide to escape Mejia and was able to hit a cross onto the head of Okazaki, who pulled off an incredibly tight finish.

However, the tournament’s best player so far, James Rodriguez, was brought on at the interval. Ten minutes later, some neat passing play saw him set up Jackson Martinez and Japan were behind again. Japan continued with their same strategy to little success and Rodriguez again set up Martinez on the break before getting his own goal with a calm lobbed finish.

Much like the Ivory Coast game, it was a matter of Colombia simply being the better quality team. The Japanese have played some nice football but they are really lacking in defence and attack so it’s little surprise that they go home, or that Colombia top the group with a 100% record.