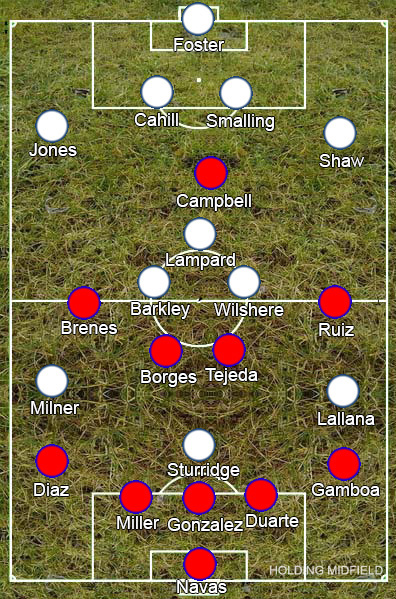 If you had spoken about this game being a dead rubber prior to the tournament, this probably wasn’t what you had in mind.

Roy Hodgson kept just Gary Cahill and Daniel Sturridge from the team beaten by Uruguay as they switched to a 4-3-3, while Roy Miller and Randall Brenes replaced Michael Umana and Christian Bolanos from the victorious side of the Italy match.

Despite the lack of consequences, neither team was particularly interested in a win. Costa Rica are primarily counter-attacking and were only in need of a draw to secure their place as group winners, while England are led by a “born loser“.

Hodgson spoke post-game of how England “dominated in midfield, we outplayed them in that area”, but it was Costa Rica that had the better of this zone despite being outnumbered. Jack Wilshere is a shadow of the player that emerged in 2011, spending the majority of his time on the floor looking injured after running into the opposition; Ross Barkley can play in any of the attacking midfield band in a 4-2-3-1, but as a central midfielder he looked awkward, particularly on where to position himself defensively; Frank Lampard needs someone more capable defensively if he is to play that holding role, as Bryan Ruiz and Brenes tucked in either side to routinely get the better of him.

If England did get the better of Costa Rica in any area, it was out wide. Costa Rica’s tendency to go quite narrow when attacking meant Luke Shaw was able to venture forward effectively down the left, although James Milner was underused on the opposite side. Nevertheless, there was no real chances of note and, while England had the better of what little there was, Costa Rica never really bothered to push men forward, so it was essentially by default.

The game’s only use was to point out the cognitive dissonance of England fans saying “we haven’t got the players” while a team with a maximum of two names recognisable to British audiences progress as group winners.