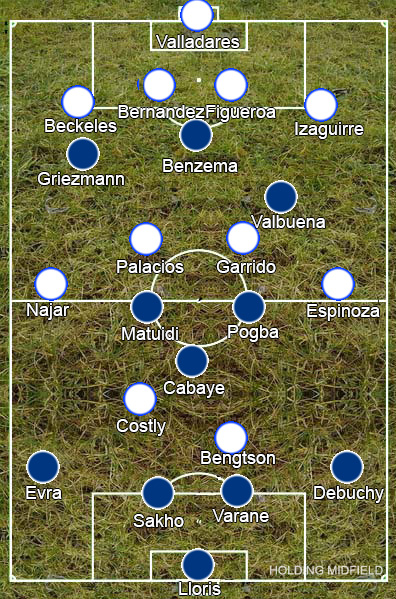 Despite not being particularly bad, Group E has been the only one to disappoint in this superb start to the World Cup, with this game settling into a contest similar to the clash between Switzerland and Ecuador earlier on in the day.

Honduras’ gameplan was simple. They sat back in a 4-4-2 and looked to break up play, killing France’s rhythm by any means necessary and breaking down the wings when they won the ball.

It was France’s job to break them down. Didier Deschamps set up his team in a 4-3-3, with Mathieu Valbuena drifting in from the right and into the centre of midfield, positioned at the tip of the diamond or coming even deeper. Antoine Griezmann alternated between the left and moving diagonally to join up with Karim Benzema up front. They mainly looked to drag all the Hondurans into the centre, opening up space on the wings for Patrice Evra and Mathieu Debuchy to burst into and stretch play. This was hard to get going however, as Honduras would break them up before it got anywhere.

They paid the price for their stretching of the rules though – not just in conceding a penalty but in Wilson Palacios’ sending off. The penalty meant France no longer had to find a way of breaking them down, and the red meant Honduras couldn’t realistically get back into the game.