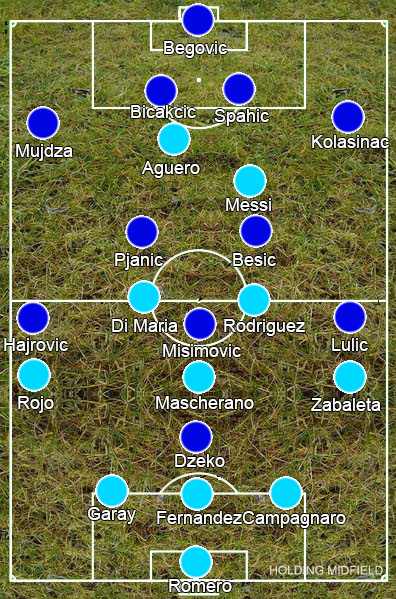 We almost had our first real stinker of the tournament to finish what has been the worst day so far, yet some tactical changes in the second half livened up the game.

Alejandro Sabella sent out Argentina in a 3-5-2, with Lionel Messi playing off of Sergio Aguero, while Safet Susic continued with the 4-2-3-1 he switched to shortly before the World Cup, leaving out Stuttgart striker Vedad Ibisevic.

The start probably mattered less than it should have done to the make-up of the game. It was sad to see Sead Kolasinac put the ball into his own net so early on his country’s World Cup debut, especially as underdogs they were really looking to keep Argentina at arm’s length for as long as possible. Nevertheless, despite taking the lead, the pressure was still on Argentina and in particular Messi to prove that they were a force worthy of their Diego Maradona-led 1986 side, while the Bosnians had few ideas of how to get back into a game no one really expected them to get anything out of anyway, so the game was still as good as 0-0.

The problem for several consecutive Argentina managers has been how to balance their plethora of world class attacking talents with an unspectacular defence. Sabella’s decision was to go with a back three and world class anchorman Javier Mascherano ahead of them, freeing wing-backs Marcos Rojo and Pablo Zabaleta to get forward and act as the link between defence and attack. Having two hard-working wingersÂ comfortable making inside-to-out runs such as Angel di Maria and Maxi Rodriguez in the centre of midfield was presumably intended for them to, firstly, link up with the wing-backs and, secondly, pull Bosnian players out to the wings and free up space for Messi in the centre.

It didn’t. The Bosnians were well-organised defensively and Muhamed Besic in particular did a fantastic job keeping Messi quiet which meant Miralem Pjanic could venture forward. Their defensive plan was clearly at odds with their hopes of getting an equalising goal back however. Senad Lulic and Izet Hajrovic did a good job of tracking the Argentinian wing-backs, but it meant they were rarely able to support Edin Dzeko, and Zvjezdan Misimovic was often deep too. Dzeko is a capable target man but not for the job at hand: fairly lightweight, he wasn’t able to hold up the ball long enough for his teammates to join him, especially against three defenders. He’s better suited to playing in a front two, where he can use his height to win headers and lay the ball off quickly, as he showed a few times when his teammates were close enough to join him, although it was generally a lonely evening for the striker.

With his starting eleven clearly not working, Sabella withdrew Maxi Rodriguez and Hugo Campagnaro for Fernando Gago and Gonzalo Higuain, switching to a 4-3-1-2. It seems a bit of an unusual decision to open a team up when they have a comfortable lead, yet it shows the need Argentina have to get Messi playing well. Gago could link the defence and attack, while Higuain gave another man up front for Messi to link with, supply for and generally occupy defenders who would otherwise be happy to gang up on the world’s best player.

Things looked brighter, with play moving a lot quicker, yet Messi was still struggling until, just as Susic was preparing to bring on a second striker in an attempt to get back into the game, the Argentine darted away from two Bosnians and finished into the bottom corner.

Ibisevic was still brought on and scored Bosnia & Herzegovina’s first goal at a World Cup. The changes of shape had a part to play, with a narrow midfield letting Lulic stride forward and slide a ball behind Argentina’s defence – now lacking a covering player against the two strikers – for Ibisevic to tap underneath Sergio Romero, but it was as more to do with laziness in dealing with the incoming threat posed by the Bosnians than tactics. The outside possibility of a Bosnian comeback was squashed with the withdrawal of Aguero for defensive midfielder Lucas Biglia.

What was shaping up to be a miserable and worrying three points ended up a much happier three points within a few seconds of Messi picking up the ball in the 65th minute. While they will be disappointed with their start to international football’s greatest stage, Bosnia & Herzegovina showed reasons to be optimistic in a group they have a great chance of getting out of.