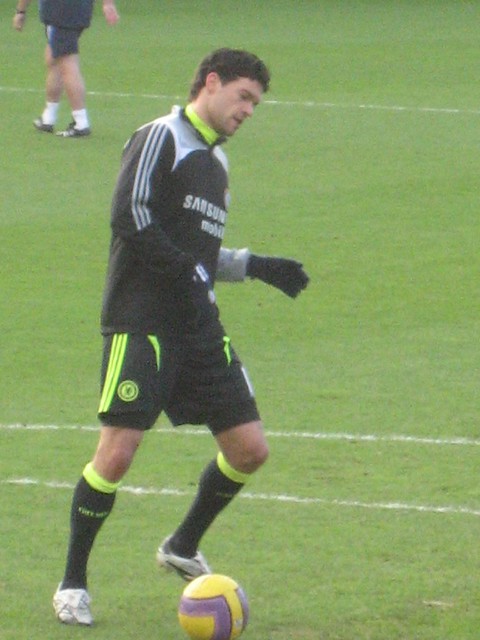 I am not a superstitious person: I do not try to avoid black cats, I step on cracks in the pavement, and I avoid breaking mirrors because it’s just plain impractical. If there was ever a person to make me question those beliefs though, it’s Michael Ballack.

Having worn the number 13 shirt at every one of his clubs besides Kaiserslautern, you can’t help but question whether there is something behind the idea it’s an unlucky number that should be reserved for back-up keepers who will never see time on the pitch.

Ballack could perhaps be best summed up by the 2001-02 season, where he was part of the Bayer Leverkusen side that dropped a five point lead in their last three games to lose the Bundesliga title, and lost in the Champions League and German Cup finals too. He then went on to drag Germany to the World Cup final, only to get suspended in the semi-final, leaving him unable to help avert a Brazilian win. If Ballack wanted to have some fun at partycasino.com, he would beat all-comers then somehow end up bankrupt.

He started out as he meant to go on, losing on his debut for Chemnitzer as they went on end the season in the relegation zone. Still, the step down allowed Ballack the chance to establish himself in the first team the following season, playing in every game and scoring ten goals. His performances caught the eye of Otto Rehhagel, whose Kaiserslautern side had just been promoted to the Bundesliga.

Kaiserslautern would go on to win the Bundesliga that season, the first newly-promoted team to do so, with Ballack playing a bit part role mostly as a substitute. As he had at Chemnitzer, Ballack established himself as a starter in his second season, but this time around he was able to play in the Champions League rather than a regional division. Success came close to Ballack, but he wasn’t a real part of it, with Kaiserslautern slipping to 5th in the 1998-99 season. Nevertheless, Ballack again earned an upwards move, switching to runners-up Bayer Leverkusen that summer.

It was at Leverkusen that Ballack came to the forefront of German football, given more attacking license than he had at previous clubs. Leverkusen looked on course to win the Bundesliga in his first season, until Ballack scored an own goal against minnows Unterhaching on the last day of the season. Needing only a draw to seal the title, Leverkusen lost, while Bayern Munich beat Werder Bremen to edge ahead of them on goal difference. Somehow, they managed to become even unluckier two years later, with the “Treble Horror” outlined above. Ballack was one of the stand-out players in the 2001-02 season, taking advantage of the space Oliver Neuville created for him with his movement to score 25 goals, while Yildiray Basturk passed beside him, Ze Roberto and Bernd Schneider offered quality on the wings and Carsten Ramelow dropped back to help out Lucio and Jens Nowotny in defence. They were a superb side yet still contrived to lose three trophies at the final hurdle.

Real Madrid looked to make him a German Galactico after his performances at the World Cup, but Ballack instead moved to champions Bayern Munich, presumably to level out his own lack of luck with Bayern-Dusel. It worked, with Bayern winning the double in all but the 2003-04 season while Ballack was at the club. Criticism of his Champions League performances were the only issue he had, establishing himself as the finest player in the Bundesliga and national team. Having run down his contract, he had little more to prove in Germany so the large wages Roman Abramovich flaunted brought Ballack to Chelsea on a bosman.

Ballack struggled to adapt in his debut season and an ankle injury in April ensured he wouldn’t see the end of it on the pitch. Still, Chelsea won the league cup and FA cup in his debut season. Ballack didn’t return from injury until Boxing day – by then Jose Mourinho had been replaced by Avram Grant and the need to regroup benefited many of Chelsea’s older players, including Ballack. They rallied and made the final of the league cup and Champions League and put in a strong title challenge. Yet again however, Ballack’s team would lose out on all three trophies, then, to add further insult, he would captain Germany to the Euro 2008 final that summer, only to lose out on another trophy.

The loss of Michael Essien to injury left a major hole in Chelsea’s midfield for the 2008-09 season, but Carlo Ancelotti built on the steadying of Guus Hiddink the following season. Ballack was finally a significant part of a winning side that had some competition when Chelsea lifted the Premier League that season, and they also won the FA Cup, which is where things would inevitably go wrong for Ballack. He started the game but a tackle by Kevin-Prince Boateng ensured he wouldn’t finish it, limping off before half-time.

It also ensured he wouldn’t be captaining Germany at the 2010 World Cup. After years of having to drag his country through tournaments, Germany had a fresh-faced generation of players who could share the burden, and Ballack wouldn’t get to be a part of it. His contract at Chelsea ran out so he returned to Leverkusen, where fitness issues have curtailed his return. This and the able performances of his replacement Sami Khedira led Joachim Low to declare Ballack wouldn’t be considered for the national team anymore, having waited for him to retire himself. Ever the egotist, Ballack took it as a personal slight, but you can’t really blame him for being bitter.

In the next few years Ballack is going to retire, yet his place in history isn’t easily distinguishable. He is clearly a magnificent player: two-footed, an excellent passer, a good dribbler, a fine shot, energetic, and strong defensively – one of the most complete players of his generation. Despite this, he doesn’t have a huge amount to show for it – other German greats have huge medal hauls won in conquering sides, and the current generation probably will too, but Ballack was part of an in-between generation he doesn’t necessarily deserve to be in. It remains to be seen how fans in the future measure Ballack, but it’s difficult not to think he might be forgotten amongst the greats of the seventies, eighties and nineties. A few more medals and ranking him would have been easier.

2 thoughts on “What Could Have Been: Michael Ballack”