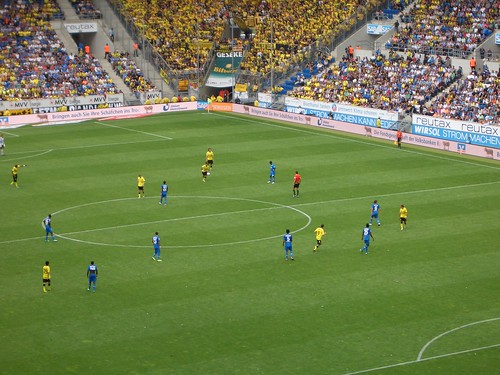 With all the German clubs from both the Champions and Europa Leagues advancing to the knockout stages, and often in thrilling fashion, a lot of attention is now being given to the 3rd placed league in Europe. Coming in behind Spain and England, Germany has replaced Italy as the next best league and people are now beginning to notice not only their on-field work but how the teams are functioning behind the scenes as well. From boardrooms to ownership and high attendances, the Bundesliga is flourishing and with teams actually turning a profit (which is surprisingly uncommon amongst top European clubs), German clubs are less likely to have to sell their top talent away to other leagues.

In the Europa League both Bayer Leverkusen and Stuttgart have done well to advance, while in the Champions League Schalke look a decent side and Bayern Munich are perennial favourites. The giants from Bavaria are contenders once again to take Europeâ€™s top club prize again after narrowly losing to Chelsea in the final last year on penalties – a game they really should have won. However it is Borussia Dortmund who have won the past two Bundesliga titles, captivating fans and neutrals alike with their strong attacking play and a youth system that is creating stars like Mario Gotze.

This season in Germany, Bayern Munich appear to have such a lead in the table that they may be uncatchable, but it is the Champions League where Borussia Dortmundâ€™s focus appears to be after last yearâ€™s group stage exit. Thrown into the group of death with Real Madrid, Manchester City and Ajax, Dortmund were up against it but managed to come out on top of the group and can now consider themselves one of the bookies’ favourites to go deep into the tournament. Their manager Jurgen Klopp has brought the team back to the glory days of the mid-1990â€™s, winning big matches in scintillating attacking form.

Watching Dortmund home games at the 80, 720 seat Westfalenstadion with the famous Yellow Wall of fans in the standing terraces waving giant flags and chanting is something to behold. It is this atmosphere that Dortmundâ€™s chief executive Hans-Joachim Watzke says makes the Bundesliga a considerably better experience than the Premier League amongst others. Watzke is a self-proclaimed romantic who is a strong supporter of the Germanyâ€™s 50% Plus One rule, which requires Bundesliga clubs to be owned by their members. Upon visiting Manchester City in the group stage, he said that it is a shame English clubs and fans are OK with being owned by Americans and Saudis and that they have banned the standing terraces, which carry most of the atmosphere in a stadium.

Watzke said: “I am a little bit romantic, and that is not romantic. In England people seem not to be interested in this â€“ at Liverpool they are fine for the club to belong to an American. But the German is romantic: when there is a club, he wants to have the feeling it is my club, not the club of Qatar or Abu Dhabi.” Last year the 50% Plus One rule was challenged by Hannover president Martin Kind, but it was strongly backed by Watske and other Bundesliga officials. Borussia Dortmund themselves are floated on the stock market after a mid-2000â€™s financial collapse, but it is the members who elect the president and the four members of the clubâ€™s supervisory board. These members also get to vote to decide major issues in club policy as well.

“I was the biggest opponent of changing the rule,” Watzke said in an interview with the Guardian at Dortmund’s Signal Iduna stadium in the build-up to the City match. “Germans want to have that sense of belonging. When you give [the supporters] the feeling that they are your customers, you have lost. In Germany, we want everybody to feel it is their club, and that is really important.” The only clubs in Germany not owned by their members are Wolfsburg, owned by Volkswagen, Bayer Leverkusen, owned by pharmacy giant Bayer, and Hoffenheim, a team with a meteoric rise funded by a single very wealthy entrepeneur, Dietmar Hopp. When the rule was contested the only club outside of those three to vote against it was Kindâ€™s Hannover, while the other 32 big clubs voted to keep the rule that was introduced in 2001.

“In former times in England I think the relationship between the club and supporters was very strong,” Watzke argued. “Our people come to the stadium like they are going to their family. Here, the supporters say: it’s ours, it’s my club.”Â  Within the famous Die gelbe Wand (Yellow Wall) at Borussia Dortmundâ€™s stadium, the 25,000 who fill the standing area on the south side of Signal Iduna stadium pay just â‚¬190 for a season ticket for the 17 home Bundesliga matches. Season tickets that also include entry to the first three Champions League group games cost slightly more at â‚¬220, working out at exactly â‚¬11 for each match. “Here, it is our way to have cheap tickets, so young people can come,” Watzke said. “We would make â‚¬5m more a season if we had seats, but there was no question to do it, because it is our culture. In England it is a lot more expensive. Football is more than a business.”

This way of running things wasnâ€™t always the way of the Bundesliga. After a terribly disappointing European Championships in 2000 where the Mannschaft were eliminated bottom of their group, winning just one point despite possessing stars like Michael Ballack and Dietmar Hamann. The 3-0 loss to Portugal followed by a 1-0 defeat to massive rivals England sparked the German FA to do something about the national program, which looked in tatters after winning Euro 96. This began with rebuilding the youth academies in the fashion of Franceâ€™s Clairefontaine, and then restructuring the Bundesliga to change the manner in which each club is controlled.Â  This brought about the 50% Plus One rule, which means there is not a single overseas owner in the league and the president of a German club, even a big one like Borussia Dortmund or Bayern Munich, is always accountable and can be voted out by the members, which is said to keep the clubs rooted in their cities and traditions.

The youth programs set up across Germany immediately started pumping out talent, and at the 2006 World Cup the first wave of true academy graduates began to populate the national team. Bastian Schweinsteiger, Philip Lahm, and Lukas Podolski were a few to shine through at the time, and by Euro 2012 there was Mesut Ozil, Sami Khedira, and Mats Hummels. At present, of the 525 Bundesliga players, 60% are German and the average age is 24. Last season in the Premier League 39% of players were English and only one player in Manchester Cityâ€™s line up against Borussia Dortmund (Joe Hart) was English, while Dortmund had seven German starters. Not only is the game more accessible to German fans and players, but getting the community back behind the teams has been very important to Bundesliga officials as well, ensuring the Bundesliga has the highest attendances in Europe.

Bundesliga chief executive Christian Seifert, who has been in place since 2005, said in an interview with the Observer that the league was going to keep its standing seats as they are an important part of the game in Germany. Cheap seats like these were banned in England after a number of disasters in the 1980s called for higher security and stadium safety, but in Germany they continue to exist and without much difficulty. “We value the fan culture we have,” Seifert emphasises. “We are the last of the big leagues with standing areas and nobody wants to touch these standing areas. The clubs are committed to having many cheap tickets, because it is considered very important in Germany that people who do not have very much money are able to come to the stadium.â€

“Here, football is one of the last activities which really brings people together, across all ages and all classes of income,” Seifert says. “Politics does not do it, the church does not make it happen. Most chairmen and chief executives have been very much involved with football, they have been supporters and players. They see from a pureÂ business perspective they could raise prices and make more money. But they have decided to take less money and enable people whose families have supported the club for generations, and young people, to keep coming. We want to have our whole society as part of our football, in our stadiums.” Many football fans across the continent are regular working people and keeping costs down is important to keep it the people’s game. There are still calls from within the German game to remove the standing areas as well for safety purposes but right now the fans remain standing.

The rule is intended to not only keep German teams strong and backed by their supporters but also to be of great benefit to the national team as well. “The rule keeps clubs closer to their roots, their community and the central purpose they have,” Seifert argues. “And maybe it keeps the clubs closer to the country, too. The rule means that the control of each club is in Germany. Bayern Munich, of course, is a global brand now, Borussia Dortmund has the opportunity to be the same, but the people running the clubs are very aware of what the clubs mean to the city and they pay attention to that, and the history. The people who run the clubs very much have their roots here, and together with the DFB I guess we share one idea: that Germany should have world-class German players.â€

“Of course each club is focused on its team, there is competition. Nevertheless the shared vision of the clubs in Germany is that we have to have a strong national team, that helps football in the country.” When asked about the Premier League, whose clubs make so much more money than the Bundesliga does â€“ â‚¬2.5bn in 2010-11 compared with Germany’s â‚¬1.7bn from still strong sponsorships and rising TV income â€“ and so attract more world stars, Seifert was diplomatic in his response: “We have a lot of respect for the Premier League, it has great club names, great coaches and players. But this is a completely different system. We think a lot about the future. The big challenge is to keep performing, at a very good, top European level, while having affordable tickets and deep roots in society. In that, we do feel we have something in the Bundesliga of which we can be a little bit proud.”

Growing stronger on the field will only help to increase the fans from overseas that the English game can boast, and then in turn more profit. While looking at global branding, German clubs still purposefully maintain a grass-roots feel with their fans in the manner of the peoplesâ€™ game in a super commercial and globalized time as the present. With two teams challenging for the Champions League (and one other putting in a good effort), and two others blazing the Europa League path, the Bundesliga is likely to attract fans across the globe.

You can read more from Jared on Field of View.

One thought on “The German Way”