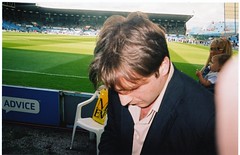 When Alan Ball took over Man City in the summer of 1995, he found a young Georgian waiting for him at Maine Road. City had narrowly avoided relegation the season before and, now the Premier League was to be reduced to 20 teams for the new season, things were about to get tougher for them. With relegation an increasingly realistic threat, chairman Francis Lee knew his team needed an extra spark, which is where Georgi Kinkladze came in.

Born in Tbilisi in 1973, Kinkladze was pushed into football by his father at an early age, enrolling him in Dinamo Tbilisi’s youth sides and making him shuffle around on his knees at home to strengthen his legs. His mother wasn’t encouraged by her husband’s efforts, instead taking him to lessons in mtiuluri, a traditional Georgian ballet – which, bearing in mind his famous “dancing feet”, probably affected his football career just as much. Eventually, he played his way through the youth sides and into the reserves, earning a move to the first team of Mretebi Tbilisi, where he impressed enough to get a move back to the newly independent country’s top club after two seasons.

Whether he was simply protecting his assets or a genuine concern for the safety of his players, Dinamo president Merad Jordania didn’t feel comfortable having his players staying in Georgia during the civil war, and looked to farm them out to clubs elsewhere. Kinkladze was sent to Saarbrucken, but didn’t settle. With little impact made, he was sent back for another year in Georgia, winning the Georgian Footballer of the Year award, but Jordania looked to send him out again.

A trial at Atletico Madrid yielded no reward, but a spell in Real Madrid’s reserves caught the attention of some Boca Junior scouts, who took him to Argentina for a month’s loan – although he was judged to be too similar to Alberto Marcico to get a permanent contract. An excellent international performance against Moldova had some clubs in Italy sniffing around, but no bids had been made, leaving Kinkladze looking at another year spent in his unstable homeland. However, Lee saw tapes of the same performance and was sufficiently enthused – he arranged a deal for first refusal with Jordania, and left Kinkladze for the rest of his season at Dinamo. Two goals against Wales for Georgia, including a 20 yard chip over Neville Southall, attracted interest, and 14 goals in 20 matches for Dinamo attracted even more. Several clubs made their pursuit clear, so City took up their agreement – Kinkladze was theirs for Â£2 million.

Ball quickly warmed to the little Georgian: “The rest of England won’t be familiar with Kinkladze’s name right now, but just you wait until the season starts. Every soccer fan in the country will be talking about him.”

It didn’t take long for City’s fans to take a liking to him either. Not that it was all that surprising: there genuinely was something of his boyhood idol Diego Maradona in the newly-christened “Kinky”. The low centre of gravity; the deceptive turn of pace; the glued control of the ball; the stroking left foot. When watching the dribbles that took him past multiple players at a time, you could easily replace him with Maradona and it not look out of place – a diving hack met with a simple chop to turn past, a touch to advance, shielding the ball from one player while tricking his way past another, then a cutting through ball or lofted cross. He wasn’t as good a shot of course, but then he wasn’t as good as Maradona. There were just glimpses that he could be. An obvious yet nonetheless eery mimicking of a hero.

Despite his hero status, Kinky still hadn’t helped City to win a game after three months of the season. It was his goal that finally earnt them three points against Aston Villa, but it had become an all too rare result. He was often playing brilliantly yet City were still losing – in a battle of the playmakers against Juninho, Middlesbrough fans named him the best opposing player of the season, however City had still lost 4-1 against them. A 2-2 draw against Liverpool on the last day of the season sealed their fate: they were going back down to Division One.

There was rumoured interest in a Â£10 million transfer to the likes of Barcelona, Internazionale and Liverpool. He stayed though. When he first arrived, speaking little English and living in a hotel, he had suffered from homesickness, but now he felt a bond strong enough to play for City in the lower tiers of English football. Not that it did him much good; City worked their way through five managers over the course of the 96-97 season, and Kinky was an obvious target for the hatchetmen of the English lower leagues. City didn’t come close to promotion, but again Kinky stayed following pleas from fans.

It only got worse though. Rather than battling their way back into the Premier League, City were struggling to avoid dropping into Division Two. In February, Joe Royle replaced Frank Clark as manager, opening up his first board meeting with “we have to sell Kinkladze.” While Kinky was on another level creatively from any other City player, he was on a much lower one defensively; his reluctance to tackle and lack of effort marked him out as an unneccesary luxury to Royle, previously manager of the aptly named “Dogs of War” Everton side. “”To the supporters he was the only positive in all that time. To me, he was a big negative,” he claimed. “I am not saying that City’s ills were all down to Kinkladze, but there was too much about the whole Kinkladze cult phenomenon that wasn’t right… too often since his arrival, the team had under-performed. I couldn’t help deducing that contrary to popular opinion, he would be my weak link not my strong one.” It’s a return to the question of how many players can get away with not defending? To Royle, the answer was none, especially when his team were staring another relegation in the face.

However, dropping Kinky didn’t do Royle much good. City were relegated on the last day of the season again, but this time the unwanted Kinky saw no reason to stay. He was sold to Ajax for Â£5 million, where he was heralded as the new Jari Litmanen – the problem was that the brilliant Finn was still at the club after his move to Barcelona fell through. Kinkladze was shifted out to the left wing, a position he simply didn’t suit. Manager Morten Olsen was sacked and a disagreement with next in line Jan Wouters meant he was dropped from the team altogether, slipping behind back-up Richard Knopper in the pecking order. “I could have been Maradona and he wouldn’t have changed the system to accommodate me,” Kinkladze said. “Things were so bad at Ajax I felt like cutting my throat.”

A loan move to Derby County rescued Kinkladze from Ajax’s reserves, but he wasn’t quite the same player that had delighted Man City’s fans just two years before. Although he claimed the stories were exaggerated, a lack of playing time had affected his fitness. He still had the brain and feet to make an impact though, and a request to manager Jim Smith to adapt his tactics to a more suitable style than the direct game Derby were employing helped him to settle. At the end of the season, Derby made the move permanent with a club record Â£3 million fee.

Injuries and an increased waistline curtailed his influence but there were still flashes of brilliance at Derby. That is until Smith resigned to be replaced by Colin Todd, who took a similar approach to Royle. “Georgi has to understand that there is an art to tackling,” he said. Then he dropped the Georgian; Kinkladze bizarrely tried to get his lawyers involved, and was unsurprisingly told he could look for a new club. John Gregory replaced the sacked Todd in January 2002, and Kinkladze began to feature more, but he didn’t do enough to save Derby from relegation.

Derby tried to get rid of him to reduce their wage bill, but he was reluctant to leave, staying with the club for another season and was named as the supporters’ player of the year. However, a contract extension with a dramatic wage cut put off Kinkladze continuing at the Midlands club, so he left to look for another club. His agent claimed there was plenty of interest from some of the top teams, yet none seemed to make any offers: Liverpool never showed any concrete interest, Celtic looked and decided against him, as did Leeds and Bolton, Dundee opened talks but he thought he still had a shot in the Premier League, when he found out he didn’t his wages put off Kilmarnock, while Panathinaikos and Shinnik didn’t offer more than a trial.

After a year searching for a new home for over a year, Kinkladze turned up at Cypriot club Anorthosis Famagusta , where new player-manager Temuri Ketsbaia was welcoming to his Georgian compatriots. Within weeks, there had been a bust up between the two, yet he still managed enough over the season to earn a contract extension. A good performance against Rangers had caught the eye of Rubin Kazan’s Kurban Berdyev, Ketsbaia made clear his thoughts: “I don’t want players who have no wish to play for Anorthosis. As far as I’m concerned the Kinkladze chapter is now closed,” so off he went to Rubin.

He started off as inconsistent as ever, but soon his playmaking ability came to the fore and he became an integral part to Rubin’s success. He said, at 32, he wished to continue playing until he was 35, and on his 05 form it looked as if he could – however a string of injuries once again cut him down the following year. Kinky retired from the game as another flutter of potential rather than a legend of the sport.