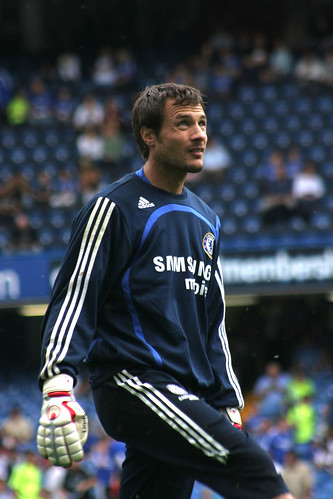 The recent transfer of Doni from Roma to Liverpool struck me as a bit strange. Doni isn’t a world class keeper, but he is good enough to start at a middle to top-range club, so trading the bench at the Stadio Olimpico for the one at Anfield seemed a little odd.

I can see the benefits of being a back-up keeper: you have a stable income with little pressure. For the most part, I have little issue with being unambitious – it’s a job someone’s got to do, after all – but when someone has proven they are capable of greater things, that’s when it becomes a bit contentious.

Francesco Toldo spent the last few years before retirement as Julio Cesar’s shadow, Steve Harper patiently waited for 12 years to become first choice at Newcastle, however the “most unambitious player in football”, according to the Daily Telegraph, is Carlo Cudicini.

The Italian started his career by following in the footsteps of his father, Fabio, as a keeper at Milan. Cudicini senior had been one of the greatest keepers in the Rossoneri’s history, winning the 1969 Champions League, but his son found it difficult to match him. He failed to dislodge Sebastiano Rossi from the starting line-up, making just two appearances in the Champions League before moving on to Serie C2 side Prato in 1995, after a brief period on loan at Como.

Cudicini finally had a shot at first team football, albeit at a much lower level, and did well enough there to earn a move to Lazio. Back in Serie A, Cudicini’s appearances were once again limited, although this time by wrist and knee injuries, so he was shipped back down the league ladder to Castel Di Sangro in Serie B. Injuries continued to restrict his game time, making just 14 league appearences in three seasons, but he had his moments – a match against recently relegated Ascoli where he saved everything, including a penalty, a highlight.

Lazio keeper Luca Marchegiani – a well-thought of player, tipped to replace Walter Zenga until a mistake against Switzerland in 1992 derailed his career – had seen something in Cudicini and recommended him to Gianluca Vialli at Chelsea, who took him on loan for a game and saw enough to make the deal permanent for a snip Â£160k.

Swatting away the attempts of Mark Bosnich, Cudicini replaced Ed De Goey near-immediately. In his first season in West London, he helped Chelsea to the FA Cup final, and, in his second, he was a huge part of Chelsea’s 4th place finish, keeping 13 clean sheets to win the Golden Gloves Premiership Goalkeeper of the Season award. Now officially the best keeper in the Premier League, the new season under new owner Roman Abramovich looked a step up for Cudicini, but his old injury problems resurfaced to limit his appearances again, his replacement Marco Ambrosio failing to match his efforts.

Unlike 6ft 6in De Goey, Cudicini didn’t have the physique to intimidate attackers. Instead it was his cat-like reflexes that enabled him to dominate his goal, springing himself through the air to palm away anything the opposition hit in his direction – notably penalties, an area he could class as his expert field.

Like his father, it was only such good contemporaries that kept him out of the national team. Sven Goran Eriksson had other plans, asking FA executive director David Davies to find out whether Cudicini, along with Edu, Louis Saha and Steed Malbranque, who were now eligible under FIFA residency rules, wanted to play for England at Euro 2004. They all opted not to, Saha and Edu getting called up for their home countries shortly after – Cudicini rejecting a brief chance at international football.

With Ambrosio clearly not up to scratch, Claudio Ranieri had given Rennes keeper Petr Cech a trial a year before, and the Czech did enough to convince him he was good enough to act as Cudicini’s understudy. Rennes accepted a Â£7m bid in February 2004 so Cech was on his way to Stamford Bridge in the summer. New manager Jose Mourinho also liked Cech, even more than Ranieri in fact. Suddenly, arguably the best goalkeeper in the Premier League was relegated to the bench.

Chelsea’s centenary year ended with their first league title for 50 years, but Cudicini hadn’t played in enough games to earn a medal. The following season, Chelsea repeated their league success, but, again, Cudicini hadn’t played enough games to earn a medal – Cech winning a place in the FIFPro and Champions League team of the season to solidify Cudicini’s place as back-up. However, despite seeing little action, he still accepted a contract extension, seemingly happy to languish on the bench.

In the tragedy of Cech’s fractured skull against Reading, an opportunity arose for Cudicini to play first team football again, only for him to be knocked unconscious later on in the same game. When he returned, his path was blocked by in-form third-choice keeper Henrique Hilario, and he had to wait until the Portuguese slipped up to win back his place. Although initially it looked as if Cech would be out for a year, he returned after just three months, Cudicini dropping back to the bench.

The following season would see Cech pick up another string of injuries, however, with Cudicini replacing him. He did well, including a run of five games where he conceded just one goal, until he was struck down by injury again, but returned in February, where he continued his good form until he was injured again in a game against Fenerbahce that effectively ended his season.

Cudicini settled down for another year on the bench, until Tottenham showed interest in January 2009, allowing Cudicini to move on for nothing due to his excellent service to the club. Heurelho Gomes had been erratic at best at the start of his Spurs career and Harry Redknapp looked to bring in the Italian to sort out his leaking backline. Had the move been made a few years earlier, there probably would have been a lot more excitement from Spurs fans, but Cudicini was seen as little more than back-up now, and, with Gomes’ form improving, he once again had to do with a place on the bench.

The next season started, and Cudicini continued to make do with a substitute role, until a serious motorcycle accident left his career hanging by a thread, both his wrists fractured and his pelvis damaged. Fortunately, three months later he returned to training, but not to the starting line-up. Injuries to Gomes at the start of the 2010-11 season gave him another shot at establishing himself, yet, despite good form, he was dropped again once Gomes was fit, who was looking more and more like the early, more erratic Gomes as the season went on.

With Gomes looking increasingly like a dead man walking, the opportunity for Cudicini to re-establish himself as Spurs’ first choice keeper looked available, but the acquisition of Brad Friedel would suggest otherwise. Now, aged 37, the possibility is that Cudicini will end his career as third choice at Tottenham when he looked potentially world class just a few years before. A quick and painless transfer when Cech usurped him at Chelsea could have given Cudicini a chance at greatness, but instead he settled for sitting on the bench.

One thought on “What Could Have Been: Carlo Cudicini”