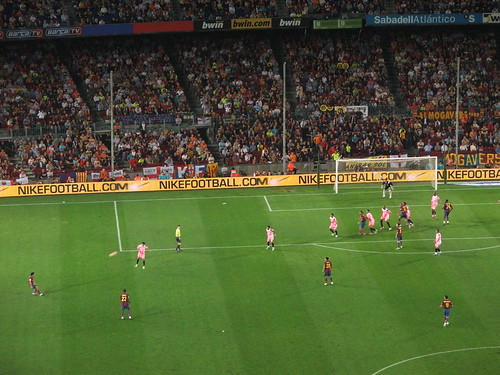 At first glance, it doesn’t really make sense how Gerardo Martino has ended up at Barcelona. Their coaches typically have some sort of link to the club – while Martino did have a brief spell at Barcelona at the tail end of his playing days, it was the Ecuadorian club founded by an immigrant from the Catalan city. The majority of his coaching was spent at the helm of the Paraguay side that grinded their way to the final of the truly awful 2011 Copa America without winning a single game. AÂ  4-4-2-shaped, wing-based team with big strikers that mainly relied on set-pieces to get their goals conflicts with what you would expect Barcelona to look for in a manager’s history. His season of management in between Paraguay and Barcelona dissipates the confusion, however.

Following his spell with Paraguay, Martino returned to the club that had named him their greatest ever player: Newell’s Old Boys. He was ever-present at the tip of the midfield diamond in the successful Newell’s side of the early nineties, and likely could have played to a high level were he a bit quicker. It was at that time Argentine coach Marcelo Bielsa, in his first job, narrowed down on his increasingly lauded style of play – tired of failing, rather than re-evaluate the way his side played, Bielsa chose instead not to make compromises, turning the focus of his side up to ten. Newell’s were a success and Martino was the key man.

Upon Martino’s return to the club, the influence of Bielsa’s pressing, verticalidad y intensidad mantra could be seen again. “Aesthetics are despised,” Martino said. “Some would say that a game was bad and finished 2-1 but others make you think it was a great match.” Paraguay showed he was more pragmatic than his mentor, but the influence was still there, albeit so was Bielsa’s customary late-season collapse. Nevertheless, although a Bielsa-lite makes more sense than the coach of the functional Paraguayan outfit, it still isn’t exactly what you would expect from Barcelona: the pressing and intensity could be seen in Pep Guardiola’s sides yet they were anything but vertical, which brings up questions over how exactly Martino is going to translate his methods to the Catalan giants, although his team have the lowest odds on sports.bwin.be/en/.

It’s been suggested that Barcelona have perhaps struggled due to their increasingly passive play, however simply throwing that away and going in the opposite direction may cause more problems than it solves. Newcastle are the perfect example of this: when hero Kevin Keegan resigned, he was replaced by Kenny Dalglish, who, rather than carrying on the attacking football, switched focus to tightening the leaky defence (given Dalglish’s history of attacking football, this wasn’t Newcastle’s fault to be fair); Dalglish was then replaced by Ruud “Sexy Football” Gullit; when Gullit stuttered, the young continental was replaced by the old Englishman Bobby Robson, steeped in the traditions of the country’s game; Robson was thought to be too nice, so was replaced by a borderline psychopath in Graeme Souness; failure in the transfer market meant Souness was replaced by Glenn Roeder – a promotion from within as head of the academy; again too nice, Roeder was replaced by the bullish Sam Allardyce, playing ugly football that wasn’t even effective. By the time the cycle was completed, Keegan was left with a host of expensive players that barely functioned together, brought in for a dozen different projects but too varied to work for any of them. A need to be more direct doesn’t mean Barcelona should go from one extreme to the other, which makes a look at the finer details of Martino’s tactics more significant.

Martino’s emphasis on pressing is a welcome to return. Above all, it was Guardiola’s need for his team to hassle the opposition off the ball that took them to a higher level than under Frank Rijkaard. His claim that “we’re a horrible team without the ball” only became more true as their defence was constructed with midfielders. Under Tito Vilanova, the team pressed less intensely and suffered for it. Beforehand, Barcelona had been able to get away with their makeshift defence by retrieving the ball high up the pitch, winning back possession before the opposition had the chance. Without that pressure up the pitch, it was much easier for the opposition to get the ball forward and take advantage of Barcelona’s limited defence, and the addition of Jordi Alba bombing down the opposite wing to Dani Alves compared to the more conservative attacking of Eric Abidal only left the defence stretched further.

The appointment of Martino should go some way to correcting this issue, as he expects his players to defend from the front, but in a more rigid structured way than Barcelona are perhaps used to. Martino has a bigger focus on shape than his previous managers had, sticking to a rough 4-3-3 shape rather than flitting between formations. Under Guardiola, who was pressing who mainly depended on who was closest to whichever player had the ball or looked to receiving it, yet Newell’s would retreat back into a distinct shape and harass the opposition in lines. The striker would press the centre-backs, the wingers the full-backs and the midfielders would follow their opposite number with the holding player hovering behind or dropping into the backline that squeezed up behind him as the situation called for. It’s a small difference from what Barca would be used to, and has pretty much the exact same effect but with less freedom for the players to interpret how to go about doing so.

Likewise, when they got the ball, they shared some patterns of play with Barca. Much like Sergio Busquets does, the deepest midfielder for Newell’s will drop back next to the centre-backs, allowing them to spread out and push the full-backs forward.

Newell’s also look to keep possession of the ball, preferring to play it along the ground rather the air bombardment typically associated with direct teams. This is where Barca and Martino’s Newell’s diverge: Barcelona would look to keep the ball and probe patiently, rolling it backwards and sideways until they find a gap ahead of them. Newell’s are always trying to move it forward.
The difference makes the finer details more important.

For instance, the creative hub at Barcelona is the midfield duo of Xavi and Andres Iniesta. At Newell’s that midfield duo were still the links, but they were less key to the gameplan. Whereas the wide players at Barcelona were mainly there to stretch play, Newell’s’ build-up play came from these areas – with the full-backs bombing forward, the wingers tucking in and the centre-midfielders moving towards that area, they formed passing triangles that allowed them to play quick one-twos and carve out chances quickly. The centre-midfielders were there for simple lay-offs in the build-up rather than incisive through balls as would be expected from Iniesta and Xavi, but they also had the opportunity to change the angle of attack in the final stages. As the emphasis with Newell’s was on everyone heading forward, it was common for them to be able to pin the opposition defence back with a front five, engineering space behind them for the two midfielders to take a shot or free up space for one of the attackers when a defender was forced out.

The majority of the side is pretty much self-explanatory: Iniesta could play a more inventive version of this central role, Jordi Alba and Dani Alves would perfectly suit Martino’s ideas for full-backs and Lionel Messi and the host of other short forwards could make up the front three easily. What isn’t so clear is where Xavi fits in. The tempo-setter in Martino’s team at Newell’s was Hernan Villalba, the holding midfielder that would drop in next to the centre-backs – it was up to him to link the defence and attack by hitting balls into those wide areas. Xavi would appear to be the most suitable player for this role – especially given he doesn’t appear to have the physicality to play in the more advanced midfield role – yet his play has frequently suffered when he has been forced to drop deeper in the past. While his footballing brain is arguably greater, he doesn’t quite have the technical range of passing Andrea Pirlo or Xabi Alonso offer in that role, and he doesn’t have as wide a range of passing options as he does in a more central role.

Regardless, moving Xavi into the holding role only raises the question of where to put Busquets. The lanky Catalan typically plays in that position for Barcelona, but, although a good passer, he doesn’t suit the playmaking role that Martino typically requires of that deeper midfielder (even with Paraguay, the stocky Nestor Ortigoza was expected to set the tempo). If Xavi was moved into the holding role, Busquets wouldn’t have the ability or mobility for the more advanced role and he didn’t have the pace to play consistently as a central defender, leaving him with no obvious place in the side.

How Martino decides to set up his side remains to be seen, but given he has shown himself to be fairly pragmatic when necessary, he may choose to be flexible when translating his methods – after all, he isn’t Bielsa, he just has similar ideals. The bigger problem is that the sheer intensity of the tactics have a huge physical toll on the players that result in the team tailing off towards the end of the season. Under Guardiola, Barcelona would press intensely and have a breather when back in possession – Martino’s tactics have intense pressing then intense possession play, meaning they don’t get a break. Fitness issues derailing a season isn’t such a problem at a smaller club like Athletic Bilbao, but it won’t be tolerated at Barcelona.

3 thoughts on “What can we expect from Gerardo Martino at Barcelona?”