By the time this game had come, the World Cup campaign of England’s “Golden Generation” seemed to have been dominated so much by the WAG circus in Baden Baden that the football had almost been forgotten. England were almost lucky to be at that stage after a dour 1-0 win against Paraguay and a less than comfortable 2-0 win over Trinidad and Tobago in the group stage, when Peter Crouch tugged on Brent Sanchoâ€™s dreadlocks for his goal. Fortunately England would have had no trouble getting past Portugal since, according to Alan Shearer, only Michael Ballack, Thierry Henry and Zinedine Zidane would get into the England team – Gianluigi Buffon, Carles Puyol, Ronaldinho, Lionel Messi, Cristiano Ronaldo and Kaka all missing out. Obviously it didnâ€™t turn out that way.

Sven-Goran Eriksson chose to send England out in a 4-1-4-1 formation, with captain David Beckham deeper on the right than Joe Cole. Owen Hargreaves replaced Michael Carrick in front of John Terry and Rio Ferdinand with the infamous Steven Gerrard-Frank Lampard partnership ahead. Eriksson seemed to have decided that a single player behind Lampard and Gerrard with Wayne Rooney as a lone striker was the way to go having scraped through their group games with Crouch partnering Michael Owen in a 4-4-2. Portugal set out in a clear 4-3-3 with two changes after â€œthe Battle of Nurembergâ€: Tiago and Petit came in for the suspended Costinha and Deco in midfield, while Ronaldo and Luis Figo switched flanks behind Pauleta. 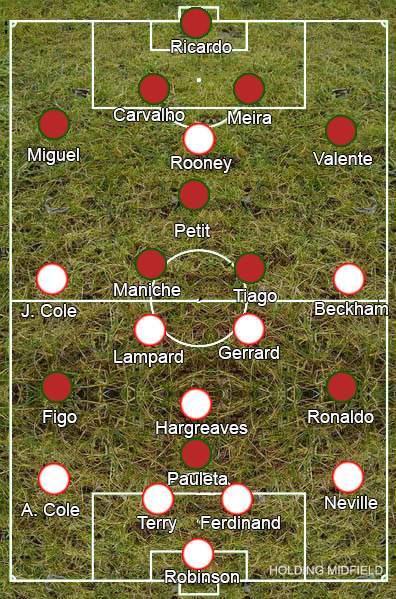 Portugal looked to play a patient passing game, playing the ball from the back into midfield, but often misplaced passes and struggled to get the ball to their front three. England, typically, started in a gung-ho manner, looking to get very early balls into the channels for Rooney to mindlessly chase with little success. There were a few half chances from dead ball situations: Tiago failing to connect with a Ronaldo indirect free kick that dropped in front of Paul Robinson and nobody got near a Lampard cut-back from a corner.

One interesting feature of the game was Beckhamâ€™s inability to play higher up the pitch. His lack of mobility meant he was unable to stretch play on that side of the pitch and get in support of Rooney who was isolated until his sending off. The decision to play him may have been justified if Crouch was starting instead but Beckham often came inside and clogged up the space Gerrard and Lampard had to work in. The knock on effect of Beckham playing on that side was Nuno Valente staying high and wide on the left flank, as there was no threat of pace in behind, allowing whoever was ahead of him on the left flank at the time to cut inside and help Portugal keep the ball. Both teams were limited to long shots by the end of the first half but Portugal looked likelier to get somebody through on goal.

Seven minutes into the second half Aaron Lennon came on for Beckham in a straight switch after Beckham was complaining of illness. Soon after England had another chance from a dead ball situation when Lampard failed to connect with a Gerrard corner and Terry missed a free volley. As the half settled down England started to pass the ball patiently, with Joe Cole starting to get onto the ball more due to him actually coming inside to look for it, but Rooney was still not getting many touches on the ball. The Lennon substitution brought a clear cut chance when he skinned Valente and cut the ball back to Rooney then Joe Cole, both miskicking horribly. Now pushed back by Lennon, Valenteâ€™s forward forays were limited and England were winning the ball higher up the pitch and dominating possession.

Just as England started to take control of the game, â€œwinkgateâ€ halted their momentum. Rooney, after all his huffing and puffing miscontrolled the ball and when involved in a battle with Ricardo Carvalho and Petit, decided to stamp towards the Chelsea centre backâ€™s lower area and was inevitably sent off. Joe Cole had to make way for Crouch and Gerrard moved to the left in a 4-4-1 formation. Simao Sabrosa also came on for Pauleta, who as a pure poacher hardly got any chances on goal, and Ronaldo took up his position upfront with Simao playing wide. Portugal, as you would expect, started to control the game again, however England were still getting bodies forward and looked to create chances. Crouchâ€™s technical ability showed as he was able to take the ball down from long balls and lay it off to his teammates and Hargreaves also showed the exceptional work rate that got him man of the match by getting box-to-box despite having to contend with being a man lighter.

Around the 76th minute, Hugo Viana replaced Tiago and roamed freely across the middle, getting on the ball more, drifting from flank to flank and generally trying to force the game more than Maniche and Tiago had previously. Helder Postiga replaced Figo as Ronaldo had struggled up front and Luiz Felipe Scolari probably thought he needed to reintroduce a more typical centre forward but it didn’t make much difference as Portugal couldnâ€™t create any quality chances and the game went into extra time.

Extra time started the same way as normal time ended: Portugal were controlling the game but the slow pace of their passing meant England could keep their shape. Crouch got less and less support as the game went on and Portugal widened their midfield and narrowed their front three, morphing into a 4-3-2-1 that managed to create a quality chance right at the end of extra time – Maniche skying Miguelâ€™s cut back to ensure the game went to penalties and all but guarantee an England loss.