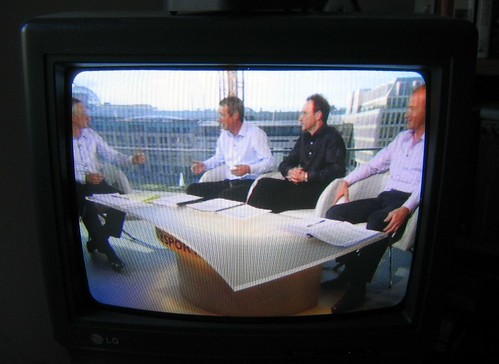 Yet Martinâ€™s fame-hungry, creepy crawly friend is just one of many bizarre, awkward and fumblingly inefficient moments to have occurred during the stupidly high amount of football coverage we are force fed each week. Here are some of our favourites.

Emmanuel Adebayor may have experienced a similar mishap during the BBCâ€™s 2010 World Cup coverage, but at least he had an excuse. Expecting a call any minute from his wife announcing the birth of their new child, the Togolese striker was unfortunate that his big news came through midway through his analysis of a Japan against Cameroon group game. Hansenâ€™s mishap, on the other hand, was his own stupid fault. He deserved all the amusing ringtone teasing that came his way.

If there was ever a man to have come closest to making literal the phrase â€˜looks can killâ€™, it is Roy Keane. Â His second coming as a pundit has been a persistently amusing, and often uncomfortable, ride. Yet even Keane could hardly keep a straight face during an hour of painful filling during Englandâ€™s rain-delayed fixture with Poland last year. Asked by a desperate Adrian Chiles to explain the difference between torrential rain and a downpour, Keaneâ€™s patience broke, and before long he was rolling his eyes and cackling terrifyingly. â€œGet me out of here,â€ was his very genuine response.

An awkward moment in the BBC graphics department

The Premier League has hardly been blessed with a plethora of Asian footballers, meaning that the challenge of telling them apart must hardly be one of the hardest for those tasked with presenting the game on our television screens. Yet Match of the Day proved this idea unfounded when they were unable tell Park Ji Sung and hat-trick hero Shinji Kagawa apart, despite the fact that they play for different countries, and â€“ more pertinently â€“ never actually played at United at the same time. Poor.

Ah, the perils of the pitch-side build up. Keen for a bit of variety or perhaps unable to gain access to the conventional indoors studio, the BBC deemed it sensible to host their introductory formalities to an Arsenal clash with Leeds United next to the pitch whilst the players were warming up. Almost inevitably, the back of Martin Keownâ€™s head was on the receiving end of a hilariously accurate Michael Brown strike. It could hardly have happened to a nicer man.

This little episode might be funny now, but it was hardly all that amusing for the thousands tuned in to ITVâ€™s coverage of Englandâ€™s first World cup group game against the USA. With Glen Johnson about to take an attacking throw on, the live coverage cut to an advert extolling the virtues of the latest range of Hyundais. When they returned from the impromptu break, Steven Gerrard was being mobbed by his teammates having scored the opening goal. Nicely done.

Itâ€™s been a rocky introduction to the ruthless world of live football coverage for BT Sport. One of their finest moments occurred at the back end of last year, when presenter Jake Humphrey, presumably desperate to inject some kind of personality to his latest broadcast, launched into some cringeworthy teasing of David Ginolaâ€™s dress sense. The former French forward did not take kindly to Jakeâ€™s comments, and was quick to let his feelings known about the presenter when he thought he was off camera. He wasnâ€™t.

The off hand comment made when the tapes arenâ€™t meant to be rolling has been the scourge of many a presenter and commentator throughout the history of football television. One of the funniest examples, though, was the astonishingly pretentious and obnoxious comment made by Richard Keys whilst he thought highlights of Scotlandâ€™s World Cup qualifying game with the Faroe Islands were running. â€œDaft little ground, silly game, fuck off,â€ was his frank verdict of the unglamorous fixture.

During RTEâ€™s coverage of Ghanaâ€™s clash with Serbia during the 2010 World Cup, Graeme Souness strayed into dangerous territory whilst analysing how Nemanja Vidic when â€œhe got raped byâ€¦sorryâ€¦he got taken apart by Torresâ€. Although Sounessâ€™ appallingly casual turn of phrase was deplorable, it was hard not to smile at the plight in which he landed his poor flustered presenter, who was forced to apologise for the Scotmanâ€™s foul mouth during a later link.

Soccer Saturday is the home of persistently embarrassing attempts at laddish humour, but there were genuine laughs to be had when Geoff Stelling cut to Chris Kamara to comment on a sending off that had just taken place in a clash between Portsmouth and Blackburn Rovers. â€œI dunno Geoff, has there? I must have missed that!â€ Kamaraâ€™s baffled face, nervous grin and â€œstill nil-nil Geoffâ€-attempt to save some face at the end of his link remains one of the more hilarious moments from the long history of football on TV.