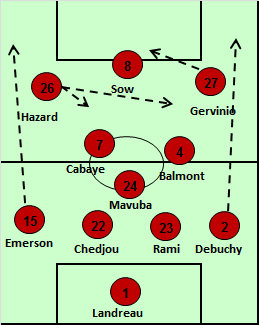 There’s already a lot of articles and analysis of the winners of the Spanish, Italian, English and German leagues, so here is tactical analysis of the French champions, who demonstrated an attractive game under the management of Rudi Garcia – another coach who likes makes notes during the match.

Lille played a 4-1-2-3 formation, which due to movement of Eden Hazard, who cut into the zone between the lines, and another wide forward transformed to something like a 4-1-2-1-2.

Other key facets of the applied formation:

* Holding midfielder (Rio Mavuba) focused on closing the central zone outside the penalty area and covering the positions of central defender.

* Central midfielders were the base of the attack’s development and engine of pressing when defending.

* The full-backs actively get involved in attack playing high, like wide forwards, they often reach the byline.

The team tried to meet the attacks of the opponent high up the field (so called high line of confrontation). Mostly the pressing started in the opponent’s half (fig. 2).

Key figures in pressing development were central midfielders Florent Balmont and Yohan Cabaye. The respective centre midfielder (depending on whether they are left or right) presses the player who got the ball, another centre midfielder moves closer to the flank to squeeze the space and close any pass to the centre. The respective full-back advances meeting the attack as soon as it enters Lille’s half. Forwards who are close to the ball join pressing if any.

The pressing was not so tough rather making players with the ball commit mistakes.

When Lille closed down the flanks with central midfielders and full-backs, the holding midfielder followed the rules below:

So in most cases, Mavuba played centrally and focused on covering the position of central defender. This gives freedom to the central defenders to advance and help the full-back. This principle is reported to have been applied to the holding midfielder’s game by Andres Villas-Boas at Porto.

In their own half, the players prefer accompanying rival with the ball – actively starting to tackle closer to their penalty area.

3. What attacks were Lille weak to?

A. Quick attacks down the flanks worked well against Lille, especially when the attacking full-backs were caught high up the field.  The opponents preferred to choose the left flank of defence, as Mathieu Debuchy liked to attack more.

B. Secondly, there was gap between the defensive line and the players pressing. It happened several times during each analysed game: the defensive line pressed themselves into their penalty area, the opponent lofted the ball into the gap and attacked well.

The main players targeted were Hazard (in most cases, he got the ball on the right) or full-back (mainly right Debuchy). Hazard performed playmaking functions in the final stage of attack, getting  10 assists for the season. Crosses from the full-backs were predominantly low and targeted to the centre of the box.

The following general structure of movements were key in delivering the ball to target players:

* Hazard cut in centrally and looked for space between the lines.

* Gervinho made run into the edge of the attack, centrally.

* Centre forward dropped into the zone between the lines in the beginning of the attack, turned out and came back. Combined with movement of Gervinho, it would confuse central defenders.

The movement of the wingers confused the opponent’s full-backs and lead to space opening for Lille’s attacking full-back, or Hazard.

Another option for opening space on the flanks for the full-back was the movement of the central midfielder to the flank, drawing the attention of the opponent’s full-back and trying to catch him out of position.

The central midfielder (more often Cabaye) joined the attack from the deep and moved toward the ball to overrun the opposition in that area. Triangles and ball possession were on the right flank mostly.

2. Other build-up play in case of opponent’s pressing

In case of the pressing of the opponent the dribbling skills of Hazard or Gervinho were used any of them could dropped deep, collect the ball from the holding midfielder, then dribble into the opponent’s half or the opponent’s players could run out at him and open up space elsewhere.

In most cases quick attacks were launched after clearing the ball after the opponent’s set-pieces. For corners, forwards were usually left out of the penalty area.

The structure of quick attacks were built on Hazard’s pace and dribbling skills: the ball is passed to Hazard, who runs from the flank to the penalty area while other forwards run into penalty area, then he passes into the centre. One of the central midfielders also comes in as a second wave of attack down the opposite flank.

Alternative way for delivering ball to attack was quick long balls to Gervinho who found space high up the field on the flanks. This approach one of the forwards getting free space on the flank – was used by Carlo Ancelotti at Chelsea towards the end of the season as well.

You can follow Petr on Twitter or read more from him on his blog A Little Bit About Tactics.