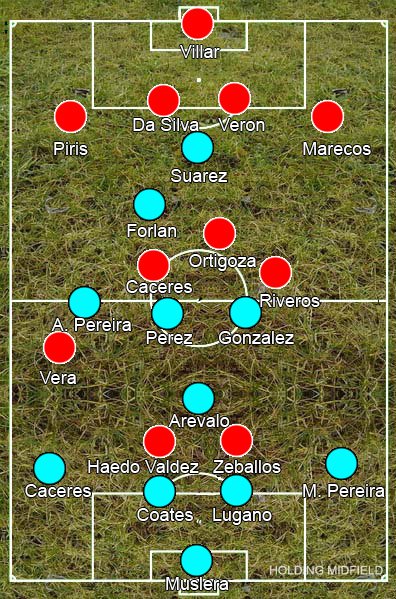 Going into the final, Uruguay were undoubtedly favourites, but Paraguay boring their way to a penalty shoot-out win was looking all too inevitable based on the rest of the tournament. Thankfully, the game was entertaining and Uruguay deservedly won their 15th Copa America.

Oscar Tabarez made some minor changes to his side, pushing Alvaro Pereira higher up the pitch to play as a left midfielder and bringing back the suspended Diego Perez in the centre.

Gerardo Martino reshaped Paraguay to match up better against Uruguay. Beforehand they had played a straight 4-4-2, but, wary of being cut apart in the centre, he replaced the left winger with the defensive-minded Victor Caceres in the centre.

Uruguay started the game the much better side and it wasn’t a huge shock when their most dangerous player, Luis Suarez, put the ball in the net just 12 minutes in. Their entire set-up at the tournament had been geared to getting the best from Suarez and Diego Forlan, and Suarez was at his best tonight, posing a constant threat with his ball control and tireless hassling of the Paraguayans.

In possession, Uruguay were quick and incisive in their passing, but they had also upped the tempo off the ball too. Venezuela had shown how Paraguay struggled to deal with intense pressure in their group game against them, so Uruguay copied them, denying Paraguay any time or space with the ball. It worked brilliantly, Paraguay couldn’t create any decent chances while Uruguay were in complete control. The second goal was a great example: Egidio Arevalo jumped upon a slow Nestor Ortigoza, before laying it off for Forlan to finish.

As with most of the games at the tournament, there wasn’t a great deal of tactical interest beyond this. Paraguay didn’t look comfortable on the ball and Uruguay took advantage of it. They were simply a much higher quality team than Paraguay, so it wasn’t a difficult game for them. Paraguay gained some control back in the second half when Uruguay let them have a bit more time with the ball, but they never looked as if they had a chance of getting back into the game – Forlan adding some gloss to the scoreline with a neat finish on the counter.

Uruguay won their first Copa America trophy since they hosted the tournament in 1995, and it was well-deserved as they were head and shoulders above any other team in Argentina. Paraguay couldn’t really complain – they weren’t as bad as their winless record would suggest, but they weren’t really worthy of a place in the final, let alone winning it.

All in all, it was a decent end to a pretty awful tournament.