You can’t help but feel sorry for Inter. For one of the biggest clubs in Italy, they aren’t all that great. What other club could make the likes of Dennis Bergkamp, Roberto Baggio and Andrea Pirlo look rubbish? And when they are great, they do it in such a way as to make them near-universally disliked. Rather than respect or admiration, Inter mostly incur either pity or loathing.

Inter’s dominance after Calciopoli was always going to be questioned without European success. With their main challengers severely weakened, you could be forgiven for thinking that Inter were only champions by default – they needed success against proper opponents to prove their quality, and consistently failed to do so under Roberto Mancini, never making it past the quarter-finals.

Enter Jose Mourinho. The confrontational self-proclaimed “Special One” was exactly what Italian football needed for its post-Calciopoli self-loathing, and was also what Inter needed. As clichéd as it sounds, Mourinho is one of those people who seems born to win. His pragmatic focus on system and defensive organisation above entertaining football; his psychological manipulation of players; his constant posturing, whether genuine or not, always keeping the eye on him rather than his team, ensuring they are relieved of a lot of pressure.

The focus on him inevitably meant that when Inter became the first Italian club to win the treble, it was his victory rather than the players’; it was his system rather than the players within it that had won the trophies; it was his man-management rather than their professionalism that had allowed it to work. He was the epitome of the modern manager – the most important man at the club. While Inter under Mancini could easily be known as Ibrahimovic’s Inter, the treble-winning side was without doubt Mourinho’s Inter, and it all seemed eerily familiar.

He was born on a white island in the Rio de la Plata or on the Tigre, nobody is quite sure when… the world was his country: he chose to be a foreigner, different, everywhere … he spoke a strange mixture of idioms, French, Spanish, English and Arabic. – Fiora Gandolfi

Born in Argentina to a Spanish trade-unionist – when exactly nobody is quite sure, but it’s supposedly sometime between 1910 and 1916 –  Helenio Herrera grew up in Morocco and became a footballer in France. A decent if unremarkable defender, he was called up for the French national team twice, however the only thing of real interest to come from his playing days was his claims of being the first player to play as a sweeper.

“It was when I was in France, it was about 1945 and we were playing like this [in a W-M formation]. With 15 minutes to go, we were winning 1-0. I was the left-back, so I tapped the left-half on the shoulder, and said “you take my place, and I’ll go here behind the defence.” And we won, and when I became manager, I remembered that.”

There are few reasons other than his devilish personality to doubt Herrera – after all it is possible that two people can think of the same thing at the same time without it being plagiarism, particularly when global communication was not at the standards of today – but it was Austrian coach Karl Rappan whose verrou system involves the first notable example of the sweeper, or verrouilleur as it was known by the Swiss press. While Herbert Chapman’s W-M system had dropped the centre-half of the 2-3-5 back into the centre of defence, Rappan pushed the wing-halves back with the full-backs moving to the centre. With the wing-halves dealing with the wingers, the centre-half handling the inside forwards (this outnumbering was a problem solved by the defence dropping deep and marking tightly, essentially ceding the midfield), this left two central defenders marking just one man, so one would drop back, stationing themselves just in front of the goalkeeper, to cover.

The first appearance of the catenaccio system from the conflicting stories in Italy point towards Salernitana’s Gipo Viani, nevertheless it was Nereo Rocco who was the most impressive early exponent. After transforming Triestina and Padova, Rocco took over at AC Milan and won Serie A in his first season and the European Cup in his second. If Viani had introduced the system, Rocco had proven that it could work with big clubs, however it was Herrera who showed it to the world.

Herrera noted the success that others were having with catenaccio and finely honed it – the base of the system was on the strict man marking and the reserve screening of the sweeper. Herrera added a little twist; for La Grande Inter, the full-backs would attack, adding greater flexibility to counter-attacking. We take attacking full-backs for granted now, but it was revolutionary at the time – think about the way Italy were unequipped to combat Carlos Alberto for his famous goal, then consider Inter had been doing that for years under Herrera. This allowed Inter to overload the opposition in defence and in attack.

The key to this was, of course, the players – the tall thin Giacinto Facchetti was spotted by Herrera playing as a forward for Trevigliese’s youth side and brought to Inter. Any doubts over the gangly youngster were immediately dispelled once he took to the field – other than his considerable defensive talents, his ability to sprint 100 metres in just 11 seconds ensured the rapid switching of defence to attack necessary for Herrera’s system to work was present. Herrera had such great faith in his full-back that he declared he would be the first of his players to make it into the national team, doing so at 20 at a time when Italy was wary of giving international opportunities to young players. 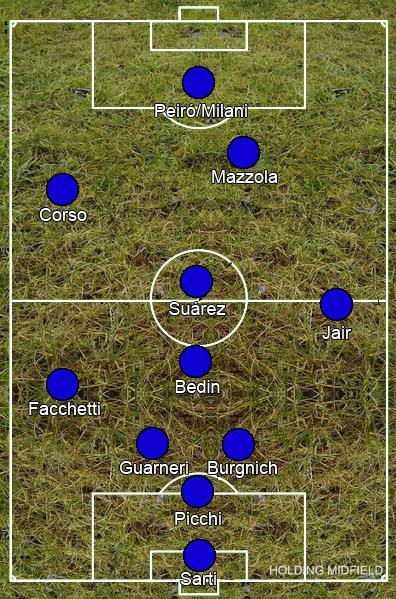 On the other side was Brazilian Jair da Costa, tasked alone with covering the entire right flank for Inter. There appears to a misconception that he was a full-back who attacked like Facchetti, most likely down to our tendency to note formations as symmetrical, when rather he was a tornanti – a winger who tracked back. Rather than any sort of tackling ability, Jair used his skill at reading the game to anticipate opposition moves and cut them out. Like Facchetti, Jair was blessed with the blistering pace and the stamina that allowed him to patrol that right flank, however he was an even more adept attacker than the Italian, embarrassing defenders easily to whip in a cross or get a shot away.

Alongside them were the uncompromising Tarcisio Burgnich and the elegant Aristide Guarneri, both playing as stoppers, with Armando Picchi sweeping up behind them. Starting his career as a full-back, Guarneri had a better technique than his more aggressive partner, but upon his signing for Inter he was switched to the centre, using his speed, positioning and tremendous aerial ability to stop whichever forwards he faced. Alongside him was the more tenacious Burgnich; while lacking some the more refined aspects of Guarneri’s game, he made up for it with his ragged determination and strength, immortalised in a quote from Pele: “I told myself before the game, ‘he’s made of skin and bones just like everyone else but I was wrong.” With Jair so often high up the pitch, Burgnich played wider than Guarneri, acting as a right-back.

With four defenders tasked with stopping the attacker, Herrera set up his own supposed creation behind them – again with a twist from what had come before. Although a far cry from the likes of Gaetano Scirea and Franco Baresi, iconic captain Armando Picchi was one of the first liberi to engage in attacking activities.

Until then, the sweeper position was inhabited by players like Ivano Blason – who would famously draw a line on the pitch and tell opposition forwards they weren’t allowed to cross it – good albeit clumsy defenders. If the defenders were the bolted door, they were an axe-wielding maniac guarding it. Picchi, on the other hand, would start attacks with a long accurate pass or stride forward towards the midfield, occasionally passing the half-way line but not popping up in the box as those that followed him did.

In front of the defence sat Gianfranco Bedin, the self-defined “role player.” Despite his good technique, he was pretty much the stereotypical ball-winner: he was reared to do the dirty work in midfield, tirelessly closing down opponents from the beginning of a match to the end. Home-grown and humble, like many defensive midfielders he wasn’t as celebrated as his more spectacular teammates, who would often credit him for his hard work.

This defensive base was balanced out with some of the greatest attacking talents the game has seen. Bedin’s midfield partner Luis Suarez followed Herrera from Barcelona for a world record fee and became the heart of Inter. Arguably the greatest passer the game has ever seen, his vision and long incisive balls were the key, along with Facchetti and Jair, to Inter’s counter-attacking. Other than possibly Jair collecting the ball deep and steaming into the huge space in front of him, the most frequent move Inter used once regaining possession was giving it to Suarez for him to ping towards Sandro Mazzola, the striker or the advancing Jair.

Plodding down the left was Mario Corso. Lazy (although not nearly as much as Herrera would have you believe) and inconsistent, he was never going to get along with Herrera but, despite his coach’s pleading, Corso was kept on – he was one of Inter owner Angelo Moratti’s favourites and he wouldn’t let him go. Even though Herrera was not fond of him, Corso played over 400 times for Inter and was capable of unlocking defences with “God’s left foot”. He also served a great tactical purpose by allowing Facchetti to play higher up the pitch; whether cutting in to shoot at goal or pulling off one of his trademark “falling leaf” crosses, he ensured that the opposition winger would have to track back, meaning that the man that Facchetti was tasked with marking played deeper so Faccheti would be higher up the pitch, closer to goal.

Sandro Mazzola, son of Torino star Valentino, played in a slightly withdrawn trequartista position. He was, however, the main goalscorer of La Grande Inter, mostly from close range or mazy dribbles, as the main striker – whether that be Aurelio Milani, Joaquin Peiro or Beniamino Di Giacomo – was generally the odd man out, because he simply wasn’t all that special. Their main job was to occupy the defenders enough to help Mazzola. The exception to this was Argentinian Antonio Valentin Angelillo, whose 33 goals in 33 appearences for Inter in 1958-59 remains a record, but Herrera disapproved of his lifestyle and he was sold on.

The system was exposed in the 1967 European Cup final against the attacking football of Celtic’s Lisbon Lions. They went one up with a penalty from Mazzola and shut up shop as usual. It didn’t work. Inter’s four defenders marked the attacking band of Celtic’s 4-2-4, but Celtic had attacking full-backs too – Bobby Murdoch passed it out to Jim Craig who cut it back for left-back Archie Gemmell. It was not possible to mark everybody without losing all attacking presence, and the problems of being outnumbered in midfield still hadn’t been solved.

Herrera blamed the players; he sold Guarneri and Picchi, who left with some stinging criticism of Herrera: “When things go right, it’s because of Herrera’s brilliant planning. When things go wrong, it’s always the players who are to blame.” The next season Inter finished 5th and he left for Roma.